Scientists from Imperial College London have used data collected at Diamond Light Source to advance the understanding of how HIV and other retroviruses infect human or animal cells. The research, which is funded by the Medical Research Council, was published in Nature this week.

Using Diamond’s finely tuned pinpoint X-ray beams the researchers were able to determine 3D structures of the key molecular machine used by viruses, such as HIV, to insert copies of their genetic material into host DNA.

This fundamental knowledge will not only facilitate design of better drugs for fighting AIDS, but may also have an impact on pioneering treatments such as gene therapy; an experimental technique using tamed versions of viruses to treat genetic disorders, such as “bubble boy” disease – a condition where a defective gene results in its sufferers having little or no immune system making them extremely vulnerable to infectious diseases and in some cases having to permanently live inside a sterile environment.

View animation of the integration mechanism 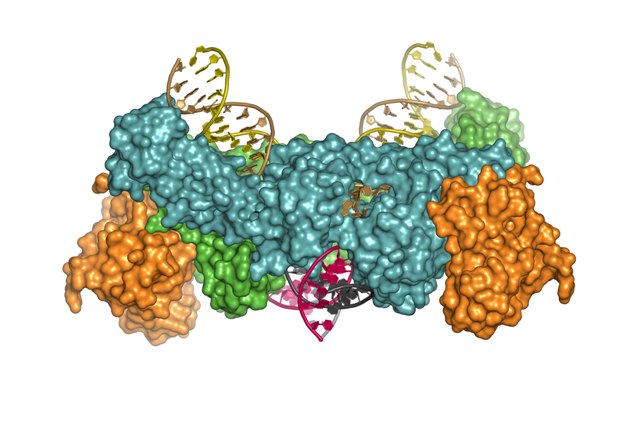 HIV and other retroviruses carry their genetic material as RNA. After entering a human or animal cell, they convert their genomic RNA into DNA, which is then inserted into a cellular chromosome. To accomplish this, retroviruses use integrase, an enzyme that brings the ends of the viral DNA and cellular DNA together. It then irreversibly joins the DNAs, making the infected cell a permanent carrier of the viral genome.
In early 2010 the researchers announced the initial breakthrough, when they determined the structure of integrase from the prototype foamy virus (PFV) assembled on viral DNA ends. Crucially, because PFV is very similar to HIV in the way it integrates its DNA, the structures allowed them to explain how an important class of HIV drugs disable integrase.
Now the group has determined 3D structures of PFV integrase bound to both viral and cellular DNA. These new structures elucidate how integrase attacks cellular DNA and the mechanics of irreversible insertion of viral DNA.

These findings may enable improvements in gene therapy to correct gene malfunctions. A disabled version of a retrovirus can be used to insert a functional copy of a gene into a human chromosome. Although such approaches have proven quite successful, they are still experimental, requiring more work to make them safer.
Dr Cherepanov explains how his group’s latest findings could help: “One of the main problems with the current method is that retroviral integration is too random. While being very efficient, by its nature, integration is not very selective with respect to its target, the chromosomal DNA. Ideally, we want to insert therapeutic genes in pre-defined, safe locations of the human genome.
Using the new structural information we have uncovered, researchers can now start trying to tweak the retroviral integration machinery to make it more suitable for practical applications. For example, we might be able to design integrase that would be highly selective for target DNA sequence.”

The structural data collection was carried out on the I02 macromolecular crystallography experimental station at the Diamond synchrotron in Oxfordshire.

“This kind of fundamental research is vital if we are to advance our understanding of the viruses and diseases that affect millions of people around the world. Knowing the 3D structure of the mechanisms involved is like being able to see inside the engine of your car. If you can actually see what is happening, you get an idea of how you can fix it. At Diamond we produce the extremely intense X-ray beams required for looking at the molecular interactions involved in a variety of biological processes.”

Advances in structural biology have accelerated greatly as a result of access to the synchrotron facilities that have been developed around the world in the past 25 years. Biologists have been swift to recognise the huge potential that lies behind understanding the multitude of processes that take place within living organisms at a molecular level. Researchers in the UK are at the forefront of this work and Diamond Light Source plays its part in providing cutting edge facilities for protein structure determination. Diamond currently has five experimental stations dedicated to structural biology as well as an on-site membrane protein laboratory. Previous breakthroughs using structural data from Diamond include gaining a better understanding of hypertension in the pre-natal condition pre-eclampsia, learning how a key tuberculosis drug is activated, understanding how bird flu can affect humans, and solving the 3D atomic models of a single transporter protein responsible for the movement of essential chemicals into cells of the body.