Diamond Light Source’s intense X-rays are helping researchers to refine their methods to better preserve the famous Tudor warship known as the Mary Rose. Raised from the seabed in October 1982, 437 years after she capsized and sank, the Mary Rose is the only 16th century warship on display anywhere in the world.

Scientists from Diamond are working with the Mary Rose Trust, a charity formed 40 years ago to help conserve the Tudor warship, and researchers from Daresbury Laboratory (STFC) and the University of Kent, to enhance their knowledge of the conservation process to preserve the historic timbers. 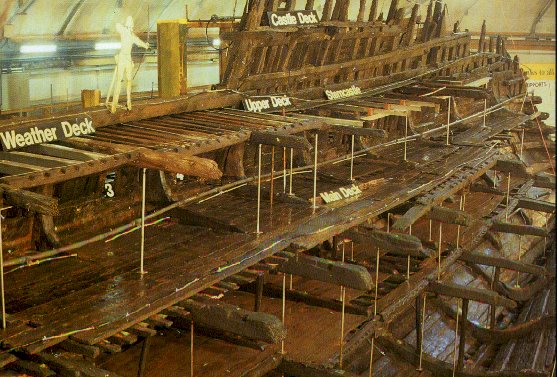 The Mary Rose capsized in the waters of the Solent, the stretch of water that lies between the Isle of Wight and mainland England, in 1545. The ship settled on the soft silts of the old Solent rivers which washed into her, eventually filling almost half the hull with a protective anaerobic covering. The resultant lack of oxygen preserved the timbers of the starboard side, whilst the exposed port side and masts slowly rotted away. Over 400 years later, on 11 October 1982, archaeologists raised her remains from the seabed.

Initially the ship was sprayed with chilled, fresh water to rinse out salts and acids and since 1994, she has been continually sprayed with polyethylene glycol (a water soluble wax) - a standard treatment which stabilises the wood structure and prevents shrinkage during drying. This conservation process has been effective in stabilising the timbers and removing almost all of the salts and acids which may harm the structure of the wood if left untreated.

The group of researchers are now working on developing a treatment for the wood that will mean it does not have to be continually sprayed with the waxy solution and can be displayed unharmed for generations to come. Particular interest lies in those areas of the vessel where iron was present – specifically in timbers surrounding the location of bolts, or where other iron artefacts such as the cannon had been in contact with the wood and in which iron sulfide compounds have been found.

The research team first came to the Diamond synchrotron with tiny slivers of the ship’s timber in early 2008 to investigate its structure in microscopic detail using one of Diamond’s research stations (I18), known as a microfocus spectroscopy beamline. Mirrors focus the X-ray beam down to about 1/80th of the width of a human hair, allowing the sample to be probed in very fine detail. Thanks to previous experiments carried out at Daresbury SRS, the European light source (ESRF) in Grenoble, and to Diamond’s microfocus spectroscopy beamline, the team of scientists are able to investigate how sulfur and iron compounds are distributed in the individual wood cells, so completing their understanding of the complex interactions between the iron, sulfur and wood cell walls.

The research group returned to the UK synchrotron a year later to collect more data and are encouraged by the results in terms of the quality and effectiveness of their potential treatments. Using data gathered at Diamond, scientists from the University of Kent are currently working on a particular set of agents that can absorb the iron from the wood. The Mary Rose Trust is looking to add these agents to the polyethylene glycol spray in the near future once further testing has been carried out. Dr Andy Smith, a Daresbury Laboratory scientist working on the project, explains how using complementary techniques can help their research.

“As the iron compounds can form in small clusters within the cells of the wood,, Diamond’s microfocus spectroscopy beamline is ideal for homing right in on a speck that is a fraction of a millimetre and mapping out the interplay between different iron and sulfur compounds. This technique is great for finding the needle in the haystack but sometimes you still need to take a step back and look at the haystack itself to keep an eye on the bigger picture, therefore, we are also using the French synchrotron, SOLEIL, to investigate the different treatments on a larger scale. As well as X-rays, we also hope to use infrared to study the actual treatment agents to make sure that they will not have an adverse effect.”

The team have recently been granted ongoing access to Diamond for this project which means that they will be able to use its pin-point X-rays on a regular basis over the next two years. They are also hoping to run their timber samples as part of the commissioning phase for Diamond’s infrared microscopy beamline (B22) which is coming online later this year.

“Our aim is to make sure that the Mary Rose has the best possible preservative treatment it could have. This has been a fascinating journey for us and now thanks to research at Diamond Light Source and the help of our collaborators, we have great confidence of the safe preservation of the Mary Rose and other historic ships for the continued enjoyment of future generations.”

The team’s work takes on an even greater significance now that planning has been granted for the creation of a museum in Portsmouth’s Historic Dockyard to showcase the ship’s hull, accompanying artefacts and its history, thanks to a £21 million Heritage Lottery Fund grant and a further £14 million raised by the trust itself. Work is due to start on the museum in September this year with a schedule to complete in time for the Olympic Games in 2012.