The Structures and Surfaces Group consists of four beamlines: I05 (Angle Resolved Photoelectron Spectroscopy – ARPES), I07 (Surface and Interface X-ray Diffraction), B07 (Versatile Soft X-ray Scattering – VERSOX), and I09 (Atomic and Electronic Structure of Surfaces and Interfaces). There has been a great deal of activity this year; continuing to develop the beamlines, working closely with the user groups, and looking to the future opportunities enabled by the Diamond-II upgrade. The group held a successful workshop in September 2018, with a focus on Diamond-II and the new science that could be enabled including potential new techniques or beamlines. Outcomes from the workshop were incorporated into the science case for the upgrade, highlighting in particular the important role that surfaces and interfaces play in broader research areas such as battery technology, photovoltaic structures, and catalytic/electrochemical systems under operando conditions. Expanding the techniques to these communities is a key objective for the group. 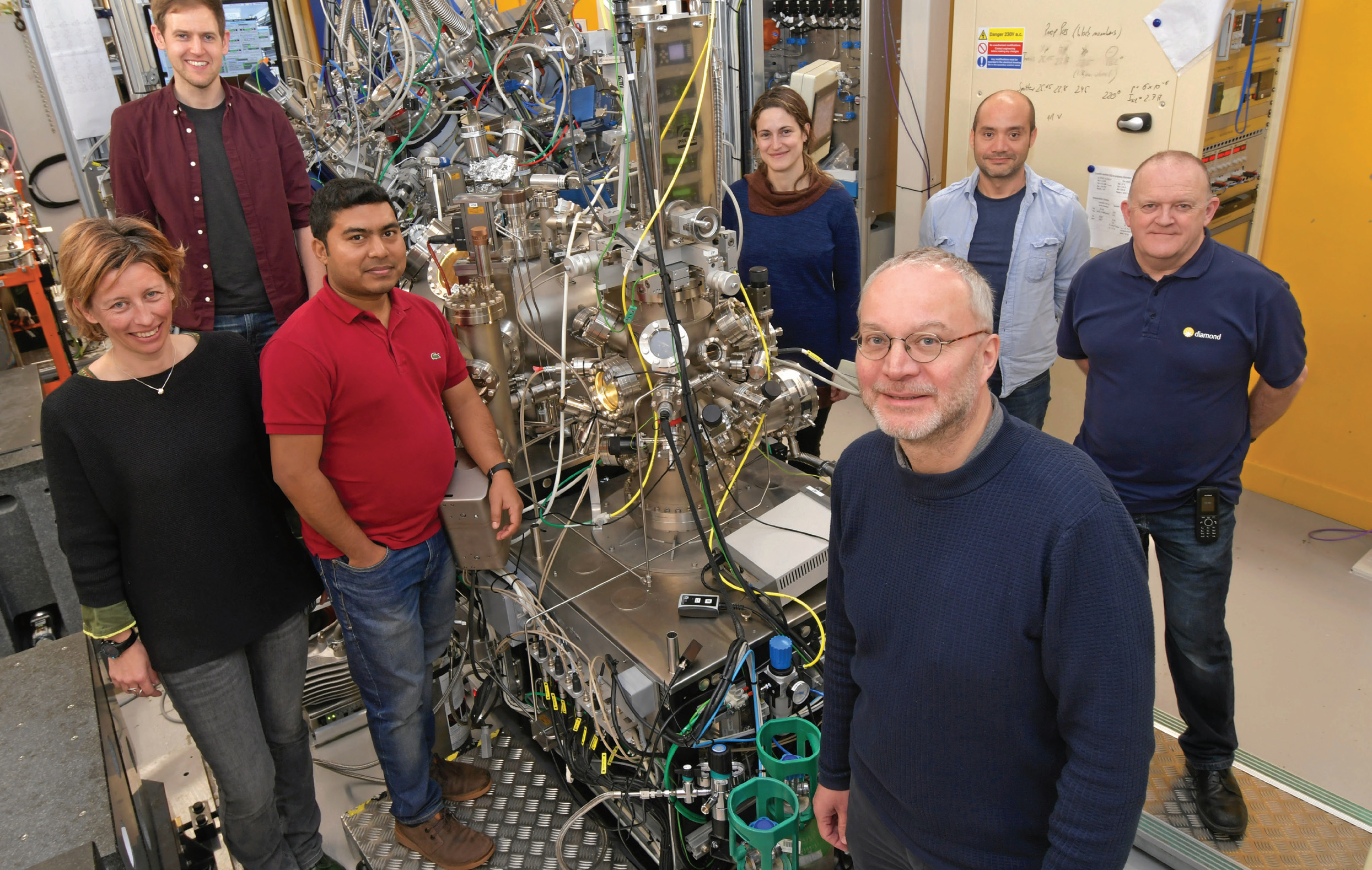 The new group structure enables the science team to work much more closely with engineering colleagues and software developers that are aligned with the science groups, leading to common solutions across the beamlines. It also encourages cross group developments, and we are strengthening interactions with the Magnetism Group, spectroscopy beamlines, and the Soft Condensed Matter Group in a number of science areas such as energy materials and catalysis. This cooperation enhances our ability to work more closely with user groups, offering a comprehensive range of techniques to non-specialists that aids understanding of their science problems.

The beamlines within the group continue to develop through a number of major and minor upgrade projects, whilst maintaining active user and in-house programmes. VERSOX (B07) is in the process of installing a second branch, to enable high-throughput X-ray Photoelectron Spectroscopy (XPS) measurements on multiple samples, and Near-edge Extended X-ray Absorption Fine Structure (NEXAFS) Spectroscopy in ambient-pressure environments up to several bar. Together with the Near Ambient Pressure XPS/NEXAFS capabilities of the existing branch, the beamline will cover a wide range of non-vacuum sample environments for soft X-ray experiments. It thus provides excellent opportunities to study the electronic and structural properties of materials relevant to science areas such as atmospheric chemistry, pharmaceuticals, catalysis, or cultural heritage, etc. Future development plans include expanding the sample environment capabilities to enable studies of solid-liquid interfaces and liquid surfaces.

The beamlines within the group continue to develop through a number of major and minor upgrade projects, whilst maintaining active user and in-house programmes. 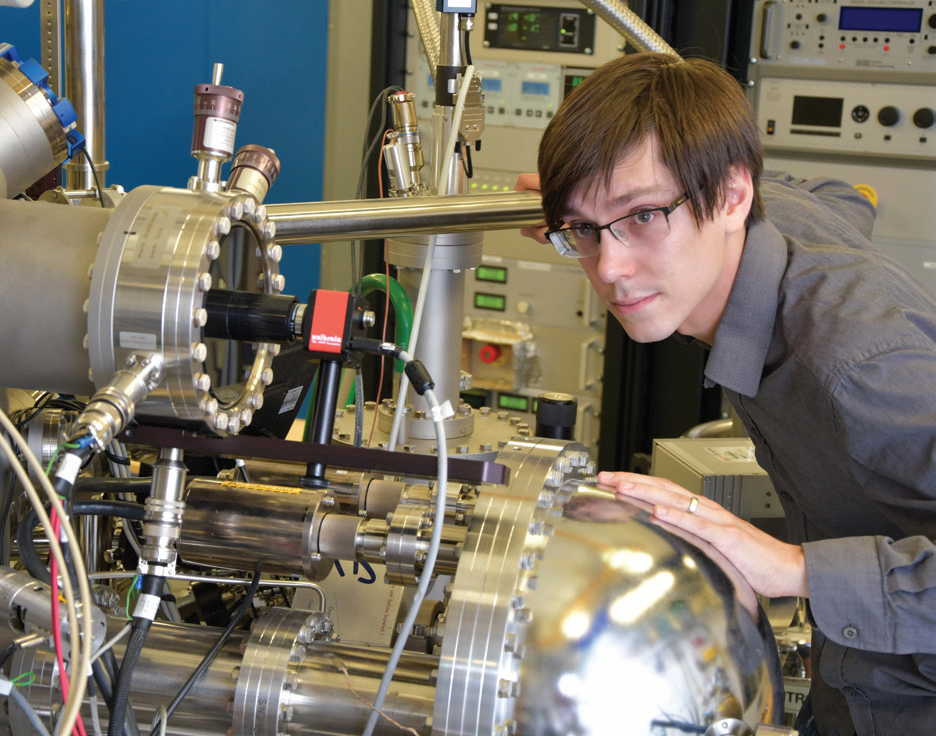 Beamline I09 is continuing to develop optimised end stations for Hard X-ray Photoelectron Spectroscopy (HAXPES) to improve studies of the electronic states of buried interfaces, and a momentum microscope to produce images of the electron band structure directly in momentum space. The HAXPES system has been transferred to its final home on the hard X-ray branch. As it has already been utilised in user experiments on the soft X-ray branch, only a limited amount of commissioning is required to optimise the system for the higher energies. The system will be available for user experiments from early 2020. The soft X-ray ARPES system (the momentum microscope) is being designed in collaboration with two user groups (Gerd Schönhense's, Johannes Gutenberg-Universität and Ralph Claessen's, Universität Würzburg), with the key development being to implement a novel electron analyser. It is a complex system that will require extensive commissioning and optimisation; the aim is to have it available for user experiments in 2021. Future upgrades to I09 are likely to include new optics to improve the energy resolution of the spectroscopic measurements and prepare the beamline to fully exploit Diamond-II.

Beamline I05 has two branches, the first a high resolution facility that has proven to be a very successful addition to the suite of beamlines, since it became operational in 2014. The high resolution (HR) branch has contributed to a number of research areas, including the discovery of Weyl semimetal behaviour in tantalum arsenide (TaAs), and studies of iron-based superconductors, such as iron selenide (FeSe). Whilst most experiments have made use of in situ cleaving to study the electronic band structure in novel crystals, there is also a fully equipped molecular beam epitaxy (MBE) system attached to the end station that can be used to produce samples in situ, and is particularly suited to the growth of thin film oxide samples. The Nano-ARPES branch is now operational, enabling investigators to understand not only the electronic structure on a macroscopic scale, but also to establish the real space distribution of those states with sub-micrometre resolution. Specific developments on I05 include adding another grating to enable higher flux over the whole energy range, and replacing the current electron analyser in the HR branch with one with integrated deflection, to enable ARPES measurements without having to rotate the sample. A new micromirror system is being developed for the Nano-ARPES branch to reduce the spot size and improve the spatial resolution; a solution that will likely also be rolled out to the HR branch. 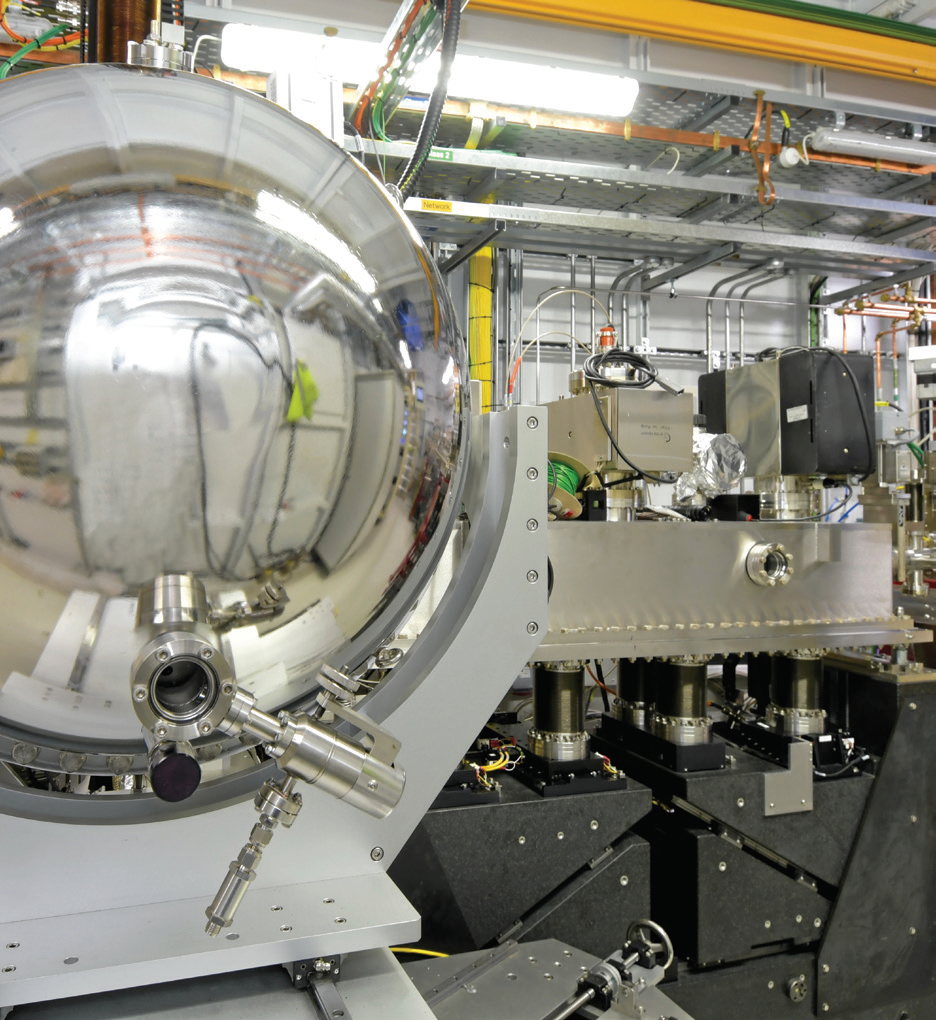 The I09 HAXPES end station from the viewpoint of the hemispherical electron analyser.

Beamline I07 has been in a period of stable operation for the last few years, but is now entering its next stage of development. There is a new Diamond-designed monochromator (planned installation in June 2019) that will improve the beam stability in preparation for a transition to use smaller X-ray beams (reduce the beam dimensions to a planned size of ~10μm), and to exploit Diamond-II. Plans are also underway to upgrade the sample environments, in particular the Ultrahigh Vacuum (UHV) system for in situ MBE studies, and to expand the electrochemistry provision. Other developments are focusing on improving the usability of the beamline through the introduction of fly-scanning, auto-attenuation, and more versatile (and automated) data reduction software. New detectors with smaller pixel sizes and higher dynamic range (integrating detectors) are also part of the beamline roadmap in order to exploit the new source.

The diversity of the science programme is a strength of the Structures and Surfaces Group, with studies ranging from the observation of novel electronic states in complex crystals, to experiments on the structure of lipid layers at the air-liquid interface. This year’s science highlights cover a broad range of applications, including understanding the structural modification of Metal Organic Frameworks (MOFs), thin films, studying the Mott-transition in an oxide sample, and the observation of polaron behaviour in molybdenum disulphide.
Rubio-Giminéz et al. used I07 to highlight the two-dimensional stacking arrangement formed through deposition using either a liquid-liquid method or Langmuir-Blodgett transfer after organising the molecules at a water surface. Relating the electronic behaviour to the structural arrangement in this conductive MOF was essential to understand the transport behaviour that may be relevant in devices for photovoltaics or photocatalysis. The correlation between the experiments clearly indicated that the charge preferentially travelled along the 2d layers rather than between them.
On beamline I09, the group from University of Würzburg studied the metal-insulator Mott transition in lanthanum titanate driven by a change in the oxygen doping of the material. The clear signature of a peak at the Fermi level was seen to develop with excess O doping, in comparison to the band gap in the stoichiometric compound. Such studies could be used in a transistor type device to act as a switch or sensor. These experiments were made possible by using a vacuum suitcase to transfer samples grown in the user’s home laboratory to Diamond for the electron spectroscopy study, a system available to all I09 user groups.
The intrinsic high resolution of beamline I05 was essential in the ARPES measurements undertaken by the group of Prof K. S. Kim. They were looking for the signature of Holstein polarons in molybdenum disulphide, caused by interaction between the electrons and the lattice through localised distortions. This was only observable by running the beamline and analyser in a very high (energy) resolution mode, where small discontinuities in the bands became visible. Understanding the mechanism by which the polarons form is important as they are predicted to play a key role in high-temperature superconductivity or solar cells.
The members of the Structures and Surfaces Group are committed to continuing the high quality scientific output from the beamlines, through enhanced interaction with our user community. Please contact us if you would like to discuss any of the techniques or possible experiments, and how the synchrotron studies could help in your research.