A quantum bead rolling on a lattice cushion

If you imagine a solid bead rolling on a soft cushion, it leaves distortions in the cushion in its wake. Transfer this analogy to the quantum-mechanical realm, and the condensed matter physics version of the rolling bead is a polaron.

Holstein polarons are small composite particles composed of an electron dragging a cloud of lattice distortions. Although they were predicted to play a key role in high-temperature superconductivity and solar cells, the spectroscopic signature of Holstein polarons, despite its importance, has not yet been observed.
Recent advances in theoretical models and computational techniques have made it possible to predict a spectroscopic hallmark of Holstein polarons. A potential candidate for the experimental observation was a surface-doped 2D semiconductor, where an anomalous superconductivity with the transition temperature as high as 12 Kelvin (K) was recently reported.
The energy resolution is a critical factor for resolving the subtle signature of Holstein polarons in spectroscopy experiments, and so a team of Korean researchers chose Diamond Light Source’s ARPES (Angle-Resolved Photoemission Spectroscopy) beamline (I05) – one of the best experimental stations in terms of the energy resolution. It allowed them to make the first experimental discovery of the spectroscopic signature of Holstein polarons, as predicted by theory. They found that the coupling strength between electrons and lattice distortions gradually increases with the charge carrier density, which is suggestive of their relevance. 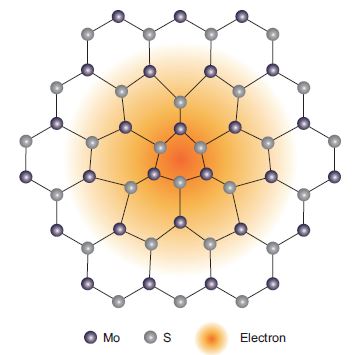 Figure 1: Schematic illustration of a polaron in MoS<sub>2</sub>. The blue and grey balls represent Mo
and S atoms, respectively. The yellowish envelop represent the electron that carries a cloud of
lattice distortions.

In nature, one can often find an entity strongly interacting with its surrounding environments. A familiar example is a solid bead rolling on a soft cushion, which is accompanied by some distortions left along the moving path. The quantum-mechanical version of this rolling bead in condensed-matter physics is a composite particle called the polaron. The theoretical basis of polarons was founded by Soviet Physicist Landau back in the early 1930s. An electron residing in an ionic crystal would attract the positively charged ions towards it and push the negatively charged ions away from it by electric forces. This can be viewed as a composite particle of an electron dragging a cloud of lattice distortions (or phonons) with it (Fig. 1). This electron-phonon interaction can be approximately described by two standard models, one is the Fröhlich-type and the other is the Holstein-type1. The Holstein-type polaron is the lattice model that has been widely employed to describe the mechanism of high-temperature superconductivity and the limiting factor of carrier mobility in solar-cell devices. Despite such potential importance in both fundamental physics and device applications, the Holstein polaron has remained elusive, because it is extremely difficult to solve analytically. Only recently, the energy spectrum of Holstein polarons, which is key to understanding their fundamental properties, was successfully calculated owing to the recent advances in theoretical models and computational techniques2. These theoretical predictions laid a ground for experimentalists to hunt for the energy spectrum of Holstein polarons that have remained undiscovered for more than 50 years.

On the other hand, since the discovery of graphene, atomically thin two-dimensional (2D) crystals have emerged as a class of materials that may impact our future electronics technologies. Owing to their atomic scale thickness, the carrier density can be tuned by electrostatic gating over the range of 1012 cm–2, which is highly useful not only for device applications, but also for the study of many-body correlations. This range of carrier density can be further increased by ionic liquid gating up to 1014 cm–2, where a variety of exotic quantum states of matter may emerge. This level of carrier doping was indeed achieved in MoS2, a 2D semiconductor with promising device characteristics. Surprisingly, electron doping to the surface of multilayer MoS2 was found to develop a superconducting dome that typically appears in the phase diagram of high-temperature superconductors3. The maximum critical temperature was reported as high as 12 K, which is the record among transition-metal dichalcogenides. This previous work made it ideal to explore a signature of electron-phonon interaction (or polaron) and its possible relevance to the superconductivity. 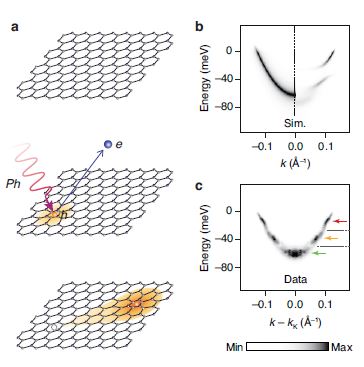 The electron density of 1014 cm–2 was achieved by ionic liquid gating3, where the spatial separation of positively charged and negatively charged ions forms an electric double layer in the surface of multilayer MoS2. The similar atomic-scale dipole layer can also be formed by the deposition of alkali-metal (Rb) atoms that donate electrons to MoS2 and become positively charged ions4. This surface chemical doping was employed in our study to experimentally explore a signature of Holstein polarons in the superconducting regime of MoS2. The energy spectrum of Holstein polarons can be detected by an experimental technique called ARPES5. The high-flux photons generated by the synchrotron radiation is incident on the samples, and photoelectrons are generated leaving photoholes behind (Fig. 2a). By recording the energy and angle of the emitted photoelectrons by an electron spectrometer, one can learn about the energy-momentum relation of initial-state electrons in the samples. This process is basically a quantum-mechanical transition, and information on the interaction of photoholes left in the samples to other degrees of freedom, such as phonons, is recorded together in the energy-momentum relation measured by ARPES. The strong interaction of electrons to phonons (polarons) appears as a series of abrupt changes in the energy-momentum spectrum (Fig. 2b). The typical energy scale of electron-phonon coupling is in the order of a few tens of milli-electronvolts, which is comparable to the energy resolution of ARPES. In this respect, the energy resolution was expected to be critical in resolving the signature of Holstein polarons, and our first choice of beamline was I05 at Diamond. 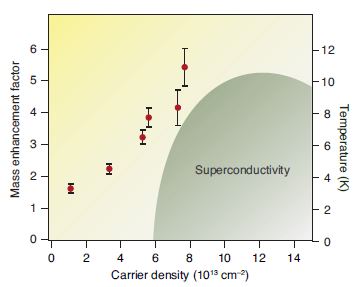 Figure 3: The mass enhancement of electrons by the interaction to phonons is plotted as a
function of carrier density. The overlaid green region is the superconducting dome reported
before<sup>3</sup>.

Our team had tried with help from the beamline scientists at I05 to find a signature of electron-phonon interactions in MoS2 doped by Rb atoms up to the carrier density at which the superconducting dome was observed. The energy-momentum spectrum of doped electrons in MoS2 shown below the Fermi energy by surface doping and measured by ARPES was overall parabolic. At that time, the yield of photoelectrons was anomalously high with the photon energy of 50–60 eV. At beamline I05, there is a safety rule that one has to keep the number of photoelectrons below a certain limit to prevent the detector from being burned out. As restricted by this safety rule, we had to reduce the number of photoelectrons at detector by narrowing the slit of the electron analyser (the narrower the slit is the better the energy resolution, but usually not used for poor yield of photoelectrons). With the narrowest slit (the best energy-resolution condition), we found something totally unexpected in the energy-momentum spectrum of MoS2. That is, we could observe a subtle signature of abrupt kinks (indicated by arrows in (Fig. 2c)) which is collectively identified as a hitherto unobserved energy spectrum of Holstein polarons predicted in theory2. To the best of our knowledge, this is the first experimental observation of the spectral function of Holstein polarons, which would not be possible without the superior energy resolution of beamline I05.

The observed energy spectrum of Holstein polarons allows us to closely scrutinise the doping evolution of electron-phonon coupling. We found an interesting tendency that the strength of electron-phonon coupling increases along with the superconducting dome in surface-doped MoS2 (Fig. 3). This is suggestive of bipolaronic pairing that has been hotly debated as a possible mechanism of high-temperature superconductivity. Although a correlation of Holstein polarons to the 2D superconductivity is yet to be made by further studies, we anticipate that the energy spectrum of Holstein polarons revealed here may contribute as a stepping stone to solve relevant grand challenges in condensed matter physics.
References
Funding acknowledgement:
NRF (grants no. 2017R1A5A1014862 and no. 2017R1A2B3011368), Yonsei University (2017-22-0059), POSCO TJ Park Foundation.
Corresponding author:
Professor Keun Su Kim, Yonsei University, keunsukim@yonsei.ac.kr