The Spectroscopy Group consists of four beamlines: the Microfocus Spectroscopy beamline (I18) the Core Extended X-ray Absorption Fine Structure (EXAFS) beamline (B18), and the two independently operating branches of the Versatile X-ray Absorption Spectroscopy (XAS) beamline, I20-Scanning and I20-EDE (Energy Dispersive EXAFS). These spectrometers are highly complementary, most notably in the energy ranges they cover, the size of their focussed beam spots, and the time resolutions they are able to reach. The complementarity of these facilities means that they can support research across many different scientific disciplines, from chemistry and catalysis through to materials science, condensed matter physics, environmental and life science, and cultural heritage. Over the last year more than 160 experiments were performed using the Spectroscopy Group beamlines.
Aside from supporting a very vibrant user programme, many technical developments have also been implemented on the beamlines over the last 12 months. Several developments have improved the detection characteristics of the beamlines, through the integration of new detectors and the development of new data acquisition electronics. Additionally, the year has seen a range of new sample environment equipment added to the beamline inventories, such as a new plug flow reactor for B18, and a helium cryostat to be used on I20. 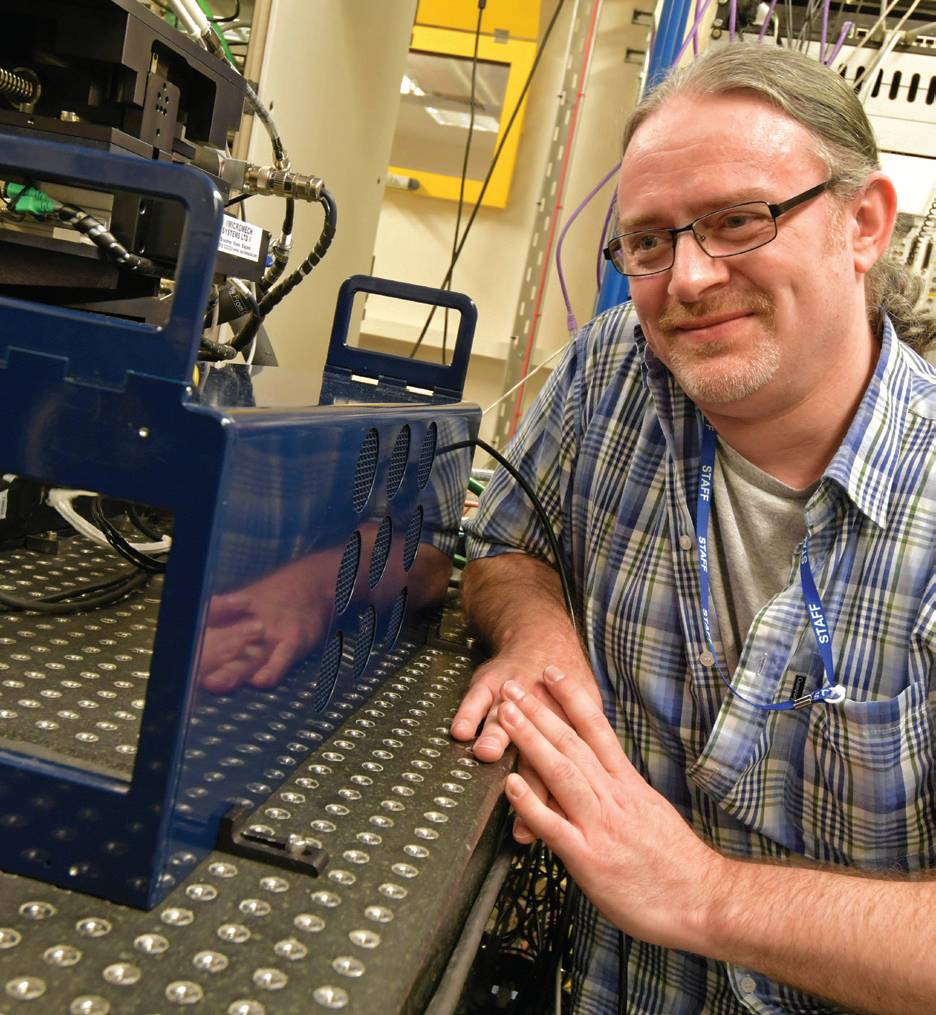 Figure 1: Senior Detector Scientist, Scott Williams, with the Excalibur detector on I18.

The Microfocus Spectroscopy beamline (I18) uses a 2x2 μm2 beam to examine heterogeneous material on the micrometre scale using a variety of techniques such as X-ray Fluorescence (XRF), X-ray Absorption Near Edge Structure (XANES) spectroscopy and X-Ray Diffraction (XRD).
In the last year, I18 continued to benefit from the recent developments made on the new mapping perspective that is used to collect XRF maps and benefitted from the simultaneous use of the two Vortex-ME4 detectors. To address the existing bottleneck for diffraction studies, in terms of data collection rates, I18 is aiming to integrate a new 2D detector, Excalibur (Fig. 1). Excalibur is a Medipix-based detector that allows fast data collection, which will enable XRD mapping and tomography measurements to be collected up to two orders of magnitude faster than with the current setup. The detector will be installed and integrated within the control and data acquisition systems of I18 over the next six months, and will be ready for user operation by the end of the year.
In addition, a novel X-ray beam position monitor has been developed, which will be installed on the beamline in the coming months. The device will enable the monitoring of the beam motions at a position close to the sample. This information will make it possible to identify and improve the optical components responsible for the beam movement e.g. monochromator vibration, mirror drift, and enable a reduction in the beam size at the sample position to below 1 μm.

The Core EXAFS beamline, B18, is characterised by a wide energy range, a focused beam and a continuous scanning monochromator. These characteristics allow for efficient collection of XAS data on all elements heavier then phosphorus. The availability of a flexible experimental space, combined with a large range of sample environment equipment, make this beamline ideal to perform experiments in situ and under operando conditions.
The implementation of a simple fluorescence mapping tool has enabled new experiments to be performed at B18, particularly for the study of heterogeneous systems. Although initially developed for the study of fossils, the mapping tool has been particularly useful for the study of precious artefacts such as cannonballs recovered from the wreck of the Mary Rose. The studies performed at B18 have helped to unravel the corrosion mechanisms in the cannonballs and their interaction with the preservative treatments used for their conservation.
Upgrades to the beamline have included the development of a new plug-flow reactor with improved temperature control, and a multiple-sample cryostat for liquid nitrogen temperatures compatible with the soft X-ray end station. This latter device will be introduced into the user programme in the next allocation period.
The fluorescence capabilities of B18 will be further increased by the integration of the newly developed Xspress-4 read-out electronics with the beamline’s existing germanium detector (Fig. 2). Xspress-4 digital pulse processor is an in-house development of Diamond’s Detector Group that significantly improves the efficiency of the data acquisition in terms of both maximum count rate and resolution. These improved characteristics will directly translate into faster acquisition times that will not only enhance the capability of the beamline for the study of processes under operation conditions, but will also enable the study of more dilute samples with a large background signal that would otherwise saturate the detector. 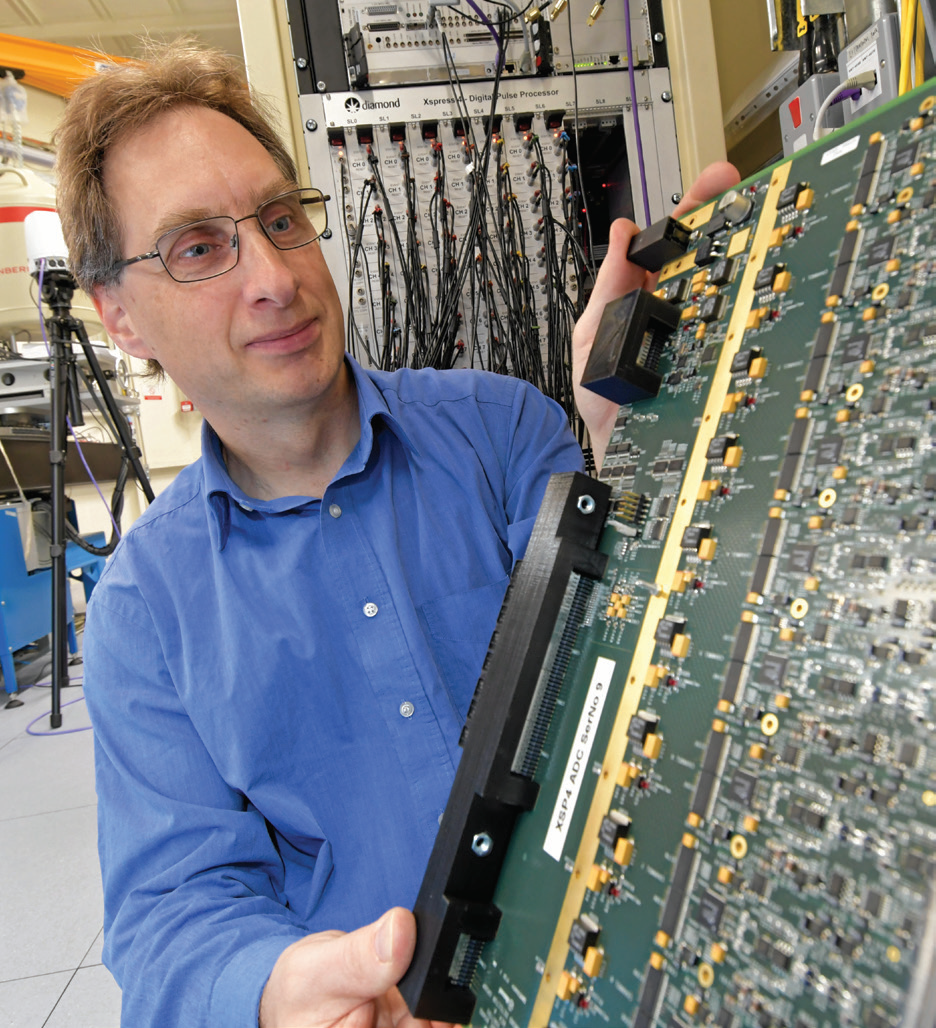 The Scanning branch of I20 (I20-Scanning) exploits the high flux provided by the wiggler source through two different end stations. The XAS end station uses a 64 element monolithic germanium detector with the Xspress-4 read-out system to examine the structure of very low concentration samples. The X-ray Emission Spectroscopy (XES) end station uses a spectrometer based on a 1m Rowland circle geometry to perform high-energy resolution studies of the electronic structure of samples.
The development project for a new monochromator for I20-Scanning has progressed significantly over the last year. The vibration and cooling performance of a new wider first crystal has been tested extensively using a spare axis, mimicking the conditions of the beamline. This new crystal was installed in the beamline monochromator in March 2019, substantially improving the cooling characteristics of the device. It is anticipated that the performance of the new system will inform the design of an entirely new monochromator for I20- Scanning that will be better able to exploit the high photon flux delivered by the wiggler source, and extend the energy range of the beamline up to 34 keV.
The XES end station has benefitted from the installation of a four-element Medipix pixel detector, replacing the single element Medipix. This larger detector enables the detection of the diffracted fluorescence signal from the crystal analyser in a more straightforward manner, and eases the challenge of aligning the spectrometer. The use of the large Medipix detector has approximately halved the time needed to set-up the spectrometer and thus improved the efficiency of the beamline. To fully exploit the capabilities of the XES end station, a new closed cycle helium cryostat capable of reaching temperatures as low as 5K has been purchased. We expect to be able to make this cryostat available to the user community this year.
The Energy Dispersive EXAFS (EDE) branch of I20 uses a polychromator to perform XAS experiments in a dispersive geometry. It is designed for in situ and operando studies with time resolutions ranging from seconds down to milliseconds or even microseconds.
The popularity of user experiments on the I20-EDE branch that use different sample environments has continued to grow over the year. Using a bespoke sample cell, an experiment combining X-ray absorption and infrared spectroscopies, was performed to study a catalyst under operando conditions with a time resolution of 100 ms, while the beamline’s stopped-flow system was used to study oxide precipitation with a time resolution as low as 20 ms. In addition, the high pressure programme on the line has developed, with a number of users studying systems under high pressure in diamond anvil cells using both traditional EDE and turbo-XAS, which is a complementary sequential data acquisition mode. Materials at pressures up to 20 GPa have been examined. 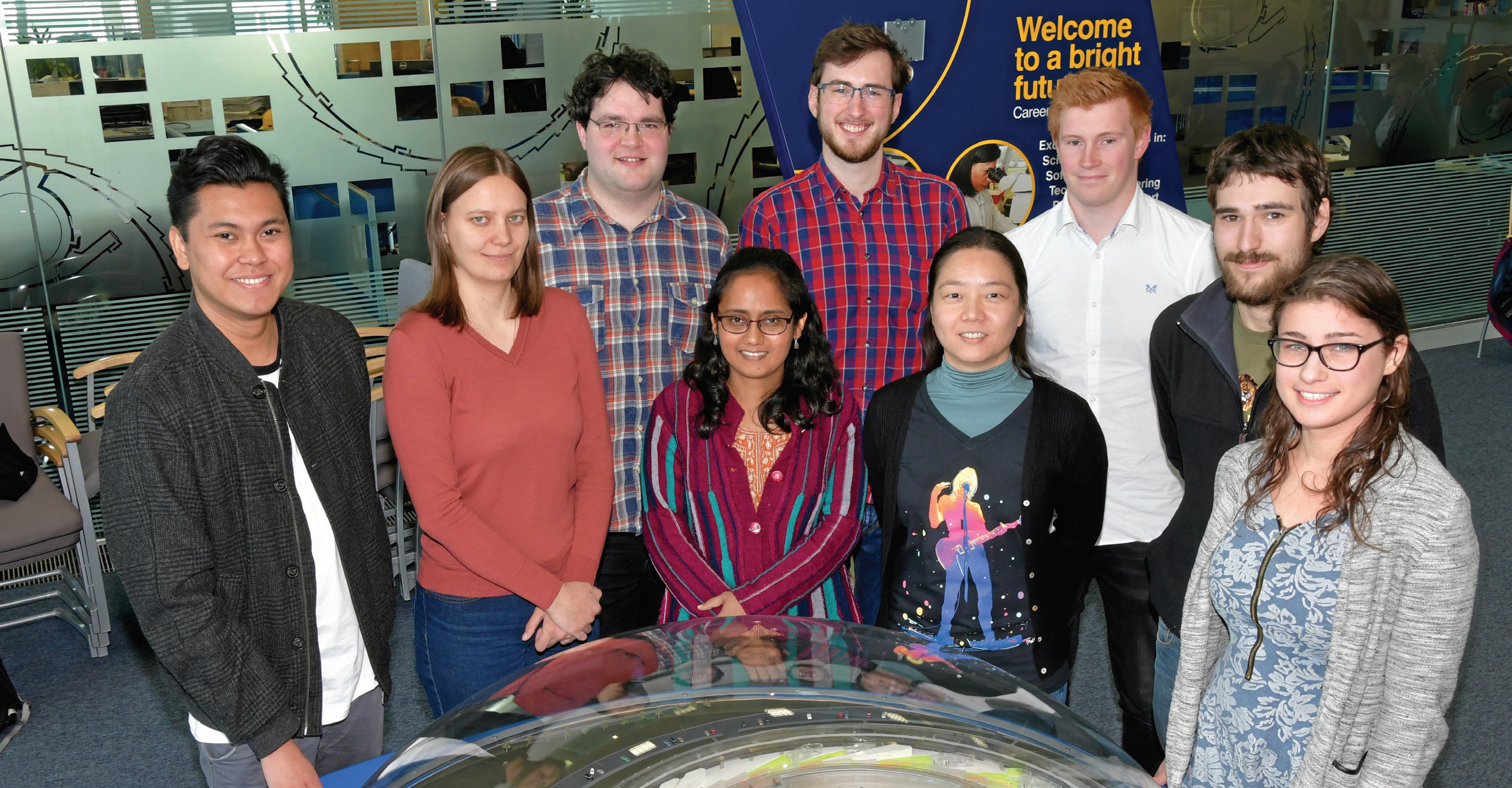 As part of our on-going role to support the development of the spectroscopy user community, the group organises and runs an annual three day XAS workshop that typically takes place in March. This workshop covers a brief introduction to the spectroscopy beamlines at Diamond, as well as methods to process and analyse spectroscopy data. The event is always in very high demand. In 2018, 82 applications were received whilst in 2019, the number of applications increased to 153. Venue limitations and required staff to student ratios limit the successful applications to no more than 25 to 30 participants.
Last February, the group also held a one-day meeting for Diamond’s spectroscopy PhD students. This meeting provided a welcome opportunity for the students to talk about their research projects with the other students and scientists in the group.
This year the Spectroscopy Group has also organised and hosted a workshop in September to canvas ideas to support the developing case for Diamond-II. The workshop was well attended by spectroscopy users from the main scientific disciplines covered by the beamlines: chemistry and catalysis, energy materials, bioscience and Earth and environment. The workshop highlighted several new research areas that will be made possible by the realisation of Diamond-II, and these new ideas were used as the foundation for the spectroscopy section of the scientific case for Diamond-II.