Some of the most effective cancer treatments involve platinum-based drugs, but resistance to platinum compounds is increasing and there is an urgent need to find alternatives. A team from the University of Warwick has discovered a new osmium-based (Os-based) anti-cancer agent, FY26, which exhibits high potency against a range of cancer cell lines and is capable of overcoming platinum resistance. Before it can be tested in clinical trials, the team needs to understand fully how it works.

Tumours are complex systems that show a low level of irrigation by blood vessels. Poor penetration can limit the ability of a drug to reach the interior of a tumour, which is of vital importance for the success of most anti-cancer agents. The researchers wanted to know how FY26 would behave in tumours, and in particular if the drug would be able to penetrate easily into their core. To investigate, they used the Microfocus Spectroscopy beamline (I18) which can resolve individual cells within a model tumour (a collection of closely packed cancer cells known as a spheroid) and has high sensitivity to detect the drug at low concentrations.

The resulting X-ray fluorescence maps allowed the team to conclude that FY26 is capable of efficiently reaching the inner core of a model tumour, with drug penetration directly related to exposure time. They found that the drug also altered the distribution of zinc and calcium, which can play a role in cancer cell death, providing new insights into the mechanism of FY26-induced cell death. 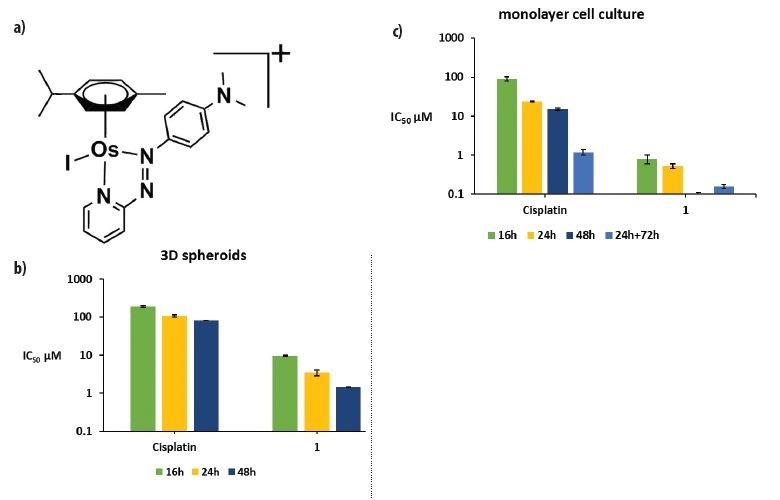 Figure 1: a) Structure of organo-osmium anticancer drug candidate FY26 studied in
experiments at I18, and antiproliferative activity (IC<sub>50</sub> μm) in A2780 human ovarian
carcinoma, b) 3D spheroids, and c) cell monolayer cultures, after treatment with FY26
(indicated as 1 in the x axis), or cisplatin using various drug exposure times (16, 24, or 48 h).

According to the World Health Organisation, cancer is the second leading cause of death globally (about 1 in 6 deaths), and was responsible for an estimated 9.6 million deaths in 2018. Furthermore, approximately 70% of deaths from cancer occur in low- and middle-income countries1. Currently, some of the most effective cancer treatments involve platinum-based drugs, which are used in almost half of all cancer patients who need chemotherapy. However, resistance to platinum compounds is increasing, and there is an urgent need to find alternative anticancer agents2.

The Sadler group has discovered a novel Os-based organometallic complex (Fig. 1a) with potent (nanomolar) activity against a wide range of cancer cells, and activity in vivo. The drug is not only more potent than clinical platinum drugs, but is also non-cross-resistant with clinical drugs cisplatin and oxaliplatin with a distinct multi-targeted mechanism of action. Their complex is rapidly internalised by cells when grown as monolayers. The drug then undergoes intracellular activation, becomes concentrated in mitochondria, and generates reactive oxygen species (ROS) directly in cancer cells3,4. All of these ultimately lead to the initiation of a unique cell death process, which is different from apoptosis, but unknown until now.
However, many types of cancers involve the formation of solid tumours. Thus anticancer drugs need to be capable of penetrating into their core to achieve an effective antineoplastic effect5. This can be difficult to achieve due to low vascularisation of tumours, amongst other factors. Therefore, it is vital to investigate drug candidates in tumour models other than 2D monolayer cell cultures, to obtain reliable information on their overall anticancer properties. 3D spheroids are easily-constructed solid tumour models which can be cultured with good control over their size. As such, they are extremely useful for initial in vitro studies of tumour growth inhibition and drug penetration.
Interestingly, this Os-based drug candidate is also highly effective (more so than cisplatin) in inhibiting the growth of 3D spheroids created from human ovarian carcinoma cells. Moreover, increases in the drug exposure time lead to comparable increases in antiproliferative activity, both in 2D and 3D cultured cells (Fig. 1b). This suggests that FY26 is capable of penetrating into spheroids in an efficient time-dependent way.
X-ray fluorescence (XRF) at the I18 microprobe beamline at Diamond Light Source has been used to probe the penetration properties of our drug and its effect on the distribution of natural metal ions. 3D spheroids tumour models were treated with a therapeutically relevant (and therefore low) concentration of the complex for different times (0, 16, 24 and 48 h), fixed, embedded in resin and sectioned in 500 nm thick sections. Then, elemental distribution were determined from XRF elemental maps, using a beam focused down to a 2x2 μm2 subcellular size (for highest resolution), and with the irradiation energy fixed at 12 keV (to achieve excitation of the Os LIII-edge).

These maps confirm the presence of Os in samples treated with the drug. FY26 complex is capable of penetrating into the tumour core, and remains there for longer than expected. Furthermore, the measurements show that both tissue penetration and accumulation of Os is directly related with the time of spheroid exposure to the drug (Fig. 2). In contrast, cell monolayers showed maximum uptake after 24 h incubation, followed by a rapid decrease in the amount of Os inside cells during the next 48 h. These differences in the accumulation kinetics of FY26 between cell monolayers and 3D tumour models may result from more effective efflux from cell monolayers, or slow diffusion of the drug into tissue-like samples.

Treatment of spheroids with the Os drug also leads to extensive changes in Zinc (Zn) and Calcium (Ca) distribution, from being discretely localised in untreated samples to being more widely distributed in treated spheroids (Fig. 2a). This change in distribution is time-dependent. After 16h exposure to the drug, some Zn and Ca are still discretely localised in certain areas of the spheroids, whereas after 24 or 48 h incubation, they are more evenly distributed. The changes observed in the Zn and Ca maps of spheroids are in good agreement with those observed for monolayer cultured cells treated with the drug5. Overall, these alterations confirm the presence of nuclear damage with Ca release from the endoplasmic reticulum (ER), possibly indicating immunogenic cell death, which remains to be further elucidated.

Overall, these microfocus X-ray fluorescence experiments on beamline I18 provide new insights into the interaction of a promising organo-osmium anticancer drug candidate with solid tumours. XRF maps show that the Os drug penetrates efficiently into tumour spheroids, although more complicated models would be required to mimic the heterogeneous nature of solid tumours. Interestingly, such studies could also be made using the I18 microprobe, on real tumours extracted from animal models treated with this drug candidate. Nevertheless, the results highlight the potential of this organo-osmium complex as a candidate for further development as a clinical drug to treat platinum resistant tumours, a current clinical need.