Many treatments for human diseases use small-molecule drugs that target protein molecules. It is sometimes quite difficult to target the active site within the protein (or ‘business end’) with such molecules. An international team of researchers set out to find new sites on a particular medically promising protein - PTP1B - where drug-like small molecules might bind and alter how the protein behaves, with the longer-term goal of treating diseases such as diabetes and breast cancer.

Their goal was to expose the protein of interest, called PTP1B, to nearly 2,000 small molecules, and to use X-ray crystallography to learn which parts of PTP1B are most prone to having molecules bind to them. They used the automated XChem fragment screening facility on beamline I04-1, followed by computer-based analysis to process the large amount of data collected during this work.

Their research at Diamond Light Source identified dozens of small-molecule fragments that stick to various ‘hot spots’ that are surprisingly widespread throughout the surface of PTP1B. Excitingly, the hot spots with the most fragments coincided with promising hot spots that had also been identified by a different, complementary approach to X-ray crystallography. The hope is that these fragments can later be stitched together into a more potent drug-like molecule. 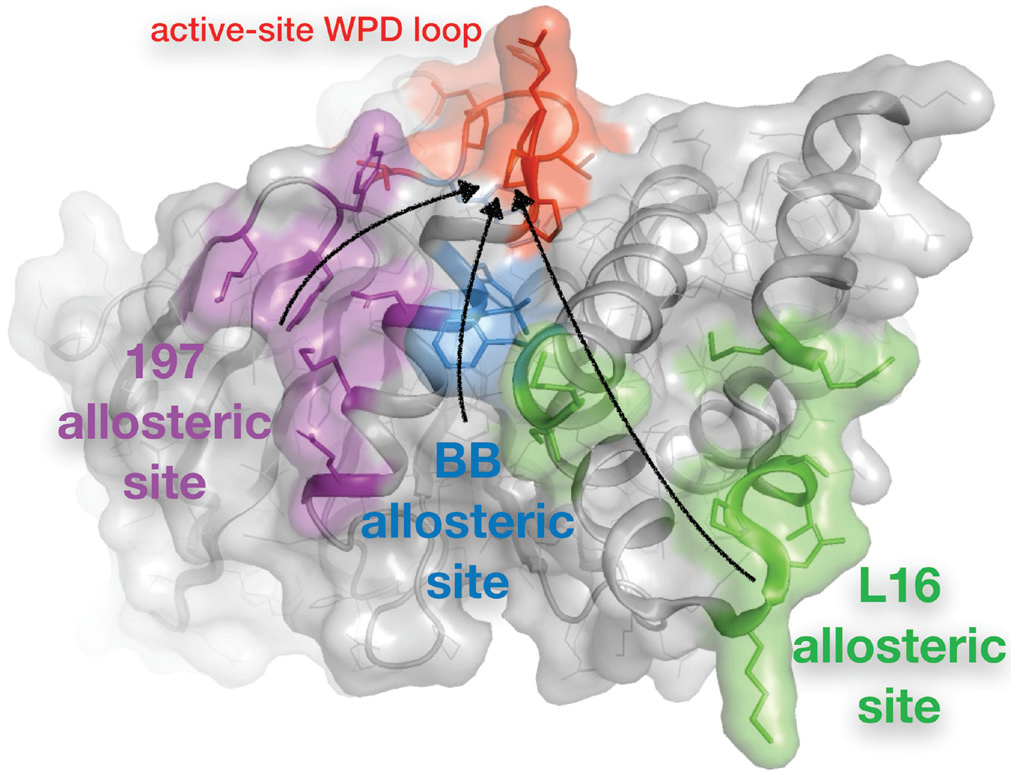 Figure 1: An expanded allosteric network in PTP1B. Multitemperature crystallography and
multiconformer modelling of the apo protein revealed one previously reported allosteric
site, the BB site (blue)3, as well as two new allosteric sites, the 197 site (purple) and the L16
site (green). Each site is thought to allosterically communicate via conformational motions
(arrows) with the dynamic WPD loop that is adjacent to the active site (red).

Proteins are dynamic molecules whose motions are important for their biological functions. In allostery, for example, protein motions between alternative conformations can propagate a signal from one part of a protein structure to another part where it can affect structure, dynamics, and function. Because protein energy landscapes are complex and inevitably give rise to alternative conformations, allostery is increasingly thought to be a property of potentially all proteins1. However, allostery remains incompletely understood, in part because we lack structural biology approaches that allow us to interrogate how different parts of a protein structure are ‘wired’ together, and which surface sites can act as inputs to this wiring network by binding small-molecule allosteric modulators.

Protein Tyrosine Phosphatase 1B (PTP1B) exemplifies the opportunities associated with an improved understanding of the physical mechanisms of allostery. PTP1B is a highly validated drug target for several diseases, most notably diabetes and obesity2, yet it remains difficult to target PTP1B’s active site with small-molecule inhibitors because of specificity and bioavailability limitations, resulting in its reputation as ‘undruggable’. Allosteric inhibitors could overcome these technical hurdles. However, despite some preliminary successes, such as a benzbromarone-based series of allosteric inhibitors3 that was clinically abandoned, there have been no clinically approved allosteric inhibitors for PTP1B.
The work described here sought to identify new allosteric sites in PTP1B and small molecules that bind to them to modulate enzyme activity. Three primary methods were used. First, multitemperature crystallography of apo PTP1B was used to elucidate networks of residues with putatively energetically coupled alternative conformations, which could participate in allosteric communication. Second, and of most interest for this report, a high-throughput facility at Diamond was used to solve cocrystal structures of PTP1B bound to hundreds of different small-molecule fragments, to determine which surface sites are ‘ligandable’. Third and finally, covalent tethering was used to increase the occupancy of molecules at an allosteric site to confirm a functional link to the active site. Each of these approaches and the associated results are discussed below, with particular emphasis placed on the work performed at Diamond. 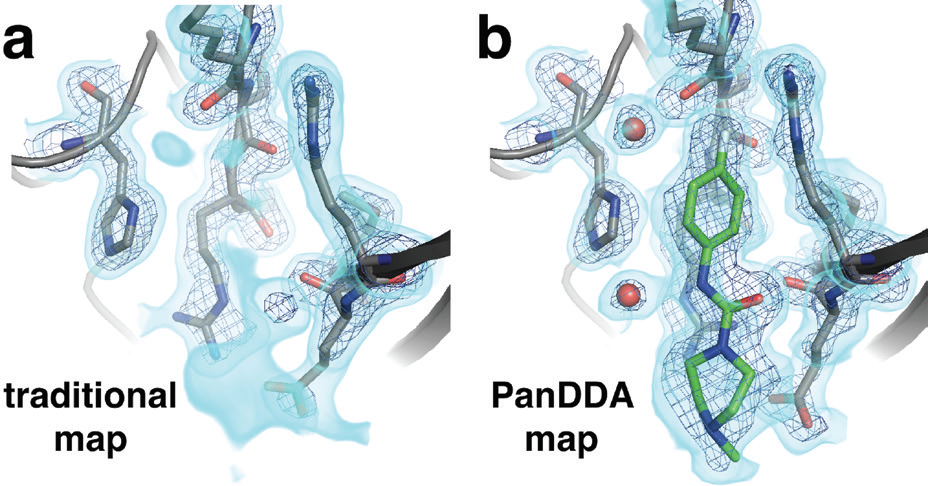 Figure 2: PanDDA analysis reveals low-occupancy allosteric fragments bound to PTP1B.
(a) For one example fragment, a traditional 2Fo-Fc map contoured at 1.25 σ (cyan volume)
and at 3.5 σ (blue mesh) provides no clear evidence for a bound fragment;. (b) By contrast,
a background-subtracted PanDDA event map (85% background subtraction in this case)
contoured at the same levels clearly reveals the precise pose of the bound fragment, plus
additional ordered water molecules that accompany it (red spheres).

The first part of this work, performed separate from Diamond, sought to elucidate the allosteric network inherent to unliganded PTP1B. To do so, multitemperature crystallography4 – instead of the more traditional cryogenic-temperature crystallography – was used to reveal redistributions of electron density for particular residues as a function of temperature. Multiconformer modelling algorithms were then used to model the corresponding alternative conformations in atomic detail. Connecting the dots between the interacting, flexible residues in PTP1B revealed a substantial putative allosteric network that included three main allosteric sites (Fig. 1). One of these sites, the BB site, coincides with the binding site for the previously reported but abandoned allosteric inhibitor3. The other sites had not been identified previously, though similar regions were implicated by concurrent analyses based on Nuclear Magnetic Resonance (NMR) spectroscopy and mutagenesis.

Having identified putatively allosteric sites in PTP1B, the subsequent challenge was to test whether they were capable of binding small molecules that allosterically modulate enzyme activity. To tackle this challenge, first the ‘ligandability’ of each site was assessed using the new high-throughput XChem facility at Diamond for small-molecule fragment soaking, X-ray data collection, and structure determination. This facility was used to soak 1,966 apo crystals of PTP1B with small-molecule fragments, almost all of which were unique. Of these crystals, 1,774 yielded diffraction data that were successfully processed. These data were generally high-resolution: 65% were better than 2.0 Å. All of this was performed very efficiently, in less than two weeks. 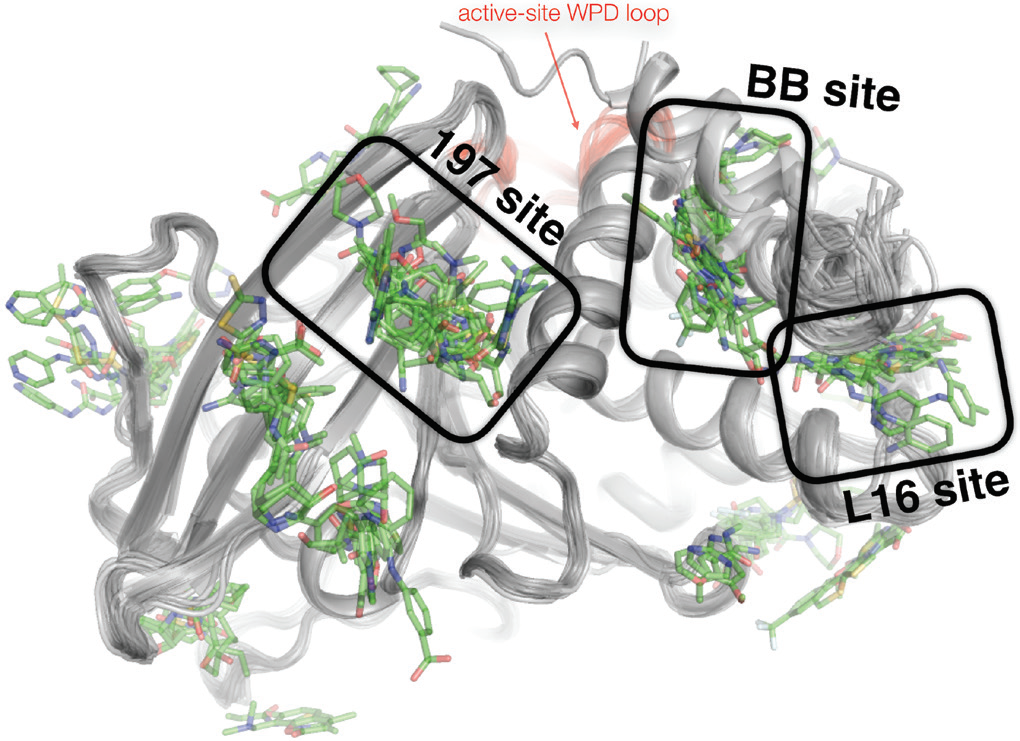 Figure 3: Overview of bound fragments across the PTP1B surface, including several fragmentbinding
hotspots: the 197 site, BB site, and L16 site. The view is similar to Fig. 1.

Importantly, by virtue of their small size, small-molecule fragments typically bind at low occupancy, and are therefore often undetectable using traditional 2Fo-Fc electron density maps (Fig. 2a). However, this work took advantage of the recently developed Pan-Dataset Density Analysis (PanDDA) algorithm5, which exploits large numbers of datasets, like those collected at XChem, to compute an average ‘background’ model for the unbound state and computationally subtract it, thus yielding a clear view of the low-occupancy bound state. For our PTP1B datasets, PanDDA yielded excellent density maps for low-occupancy fragment binding events (Fig. 2b) scattered across the protein surface; these binding events would not have been evident without this special analysis.

Overall, most fragments did not bind, as was expected given the naively constructed fragment library. However, using PanDDA, 110 of the 1,774 datasets yielded all-atom structures of PTP1B bound to unique small-molecule fragments. These fragments’ binding sites were spread across the surface of PTP1B – but they clustered at three primary ‘hot spots’ (Fig. 3) which coincided remarkably well with the putative allosteric sites discovered by multitemperature crystallography of the apo enzyme (Fig. 1). This convergence was encouraging that these sites in PTP1B would perhaps be capable of binding potent allosteric inhibitors.

To separately validate the functional relevance of the putative allosteric sites identified by XChem fragment screening of PTP1B, a covalent tethering experiment was also performed outside of Diamond. One molecule, compound 2, significantly inhibited PTP1B catalysis (Ki of 7.1 ± 1.1 μM) when tethered to a K197C mutation at the new 197 allosteric site, confirming that at least this site is truly allosterically linked to the catalytic site.

Overall, this work pinpointed exciting new footholds for allosteric inhibition or ‘remote control’ of a daunting but promising therapeutic target, PTP1B. Future efforts can explore at least two avenues related to this work. First, the fragments identified here by XChem and PanDDA may be fruitfully linked and optimised into higher-affinity binders, which could yield potent allosteric inhibitors of PTP1B. Second, although the conformational heterogeneity underlying the allosteric network in apo PTP1B was identified via multitemperature crystallography at temperatures ranging from ~100 K to ~300 K, the XChem fragment screening of PTP1B described here which was used to validate that network was performed at cryogenic-temperature, ~100 K. Future work may productively combine aspects of both these approaches by performing room-temperature fragment screening. Such an approach could elucidate how the conformational motions underlying allostery in PTP1B are perturbed by binding of specific ligands at specific allosteric sites. Such work could also clarify whether ligand binding observed at cryogenic-temperature is still relevant at near-physiological temperature.