A type of 3D printing called laser additive manufacturing (LAM) uses a high-energy laser beam to melt powder particles into a solid structure in under 1/1000th of a second. The powder melting process controls how materials are formed, governing the overall product performance. However, the fast laser-material interaction makes it difficult to optimise the processing conditions, resulting in defects. The presence of defects slows down the adoption of LAM for safety-critical engineering components such as turbine blades, energy storage, and biomedical devices.

A team from Diamond Light Source and the University of Manchester used a specially designed 3D printer to observe the LAM process in action, using high-speed X-ray imaging. The aim of the research was to record the entire process of metal powder fusion, providing detailed information on how melt features form and evolve. The Joint Engineering, Environmental and Processing (JEEP) beamline (I12) provides high-energy X-rays able to penetrate the high-density metallic materials used to make engineering components, including iron-based and nickel-based alloys. In this case, the team studied Invar 36, an iron-nickel alloy. The beamline is equipped with a high-speed X-ray imaging system, which allows researchers to record the entire LAM process at up to 10,000 frames per second.
The team’s results provide detailed information on the formation and evolution of the melt track during LAM, in particular the formation of porosity and the ejection of powder and molten material. This work clarifies aspects of the physics behind LAM, which are critical for its development, and provides a ‘map’ that enables manufacturers to select the optimum process parameters for making quality products. 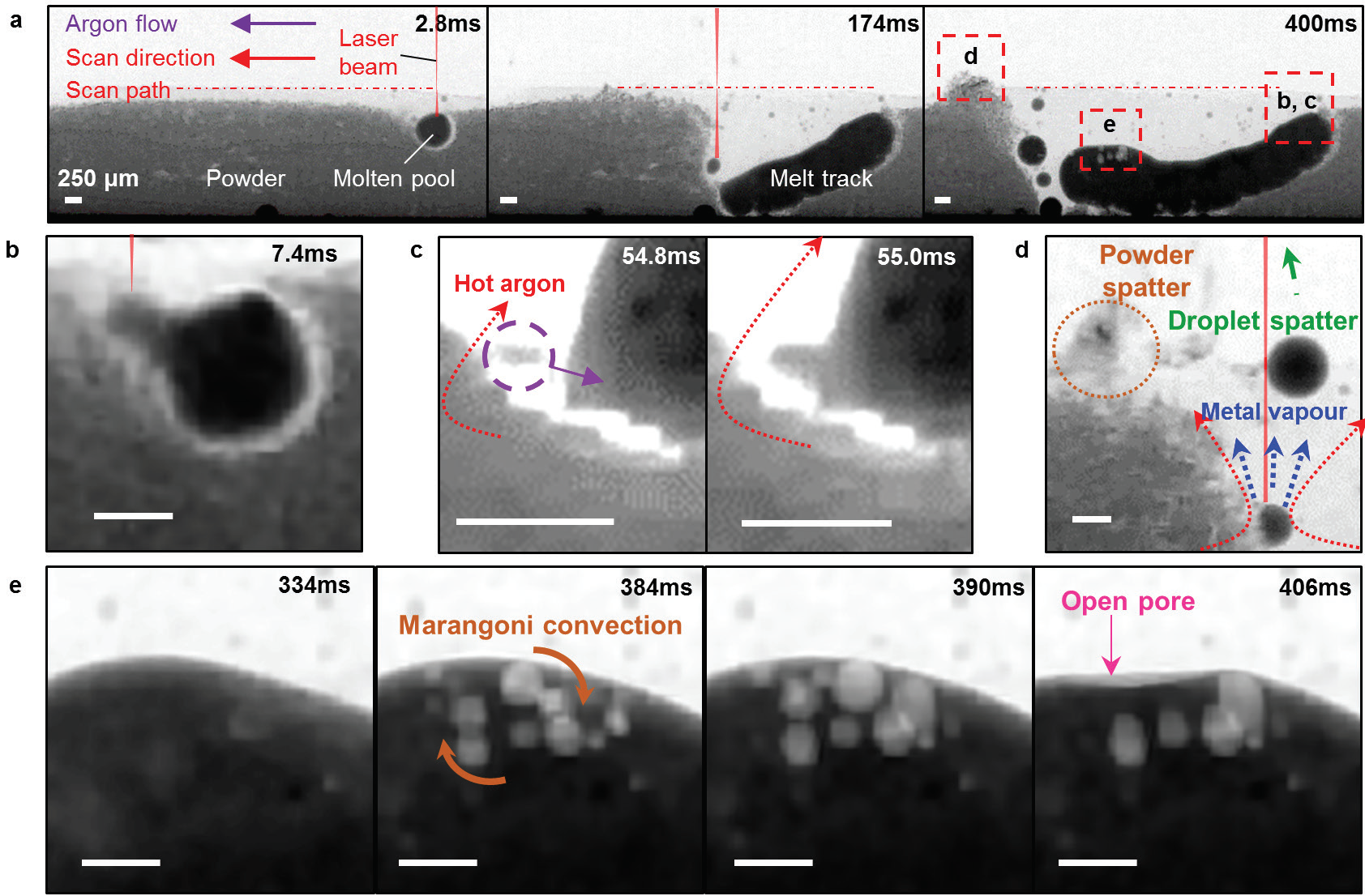 Figure 1: Time series radiographs showing (a) the evolution of a single layer Invar 36 melt track, whereby the melt track formation is driven by
(b) molten pool wetting and (c) powder entrainment, and the evolution of (d) spatter and (e) porosity.

Laser additive manufacturing (LAM), or metal 3D printing, transforms a 3D digital design into a real-life component by fusing metallic, ceramic, or other powders using a laser beam, layer-upon-layer. It has been used for a wide range of product applications, including jewellery, sports equipment, dental implants, and fuel nozzles. The adoption of LAM in the production of safety-critical engineering structures, such as turbine blades, biomedical, and energy storage devices, is hampered by many technical challenges1, including complex laser-matter interactions2, powder oxidation3, and defects4, such as porosity and spatter. These defects may act as stress initiators, deteriorating the performance of LAM components during use. A better understanding of how these defects are formed and evolved during LAM is crucial for process and product optimisation.

At present, the underlying defect formation mechanisms are inadequately understood, because the laser-matter interaction, and subsequent thermophysical phenomena, occur on very short time scales (10-6 - 10-3 s). Although some phenomena at the powder bed surface have been revealed by in situ process monitoring devices during LAM, the evolution of defects inside a molten pool (or melt tracks) has not been observed, hindering our understanding of LAM. 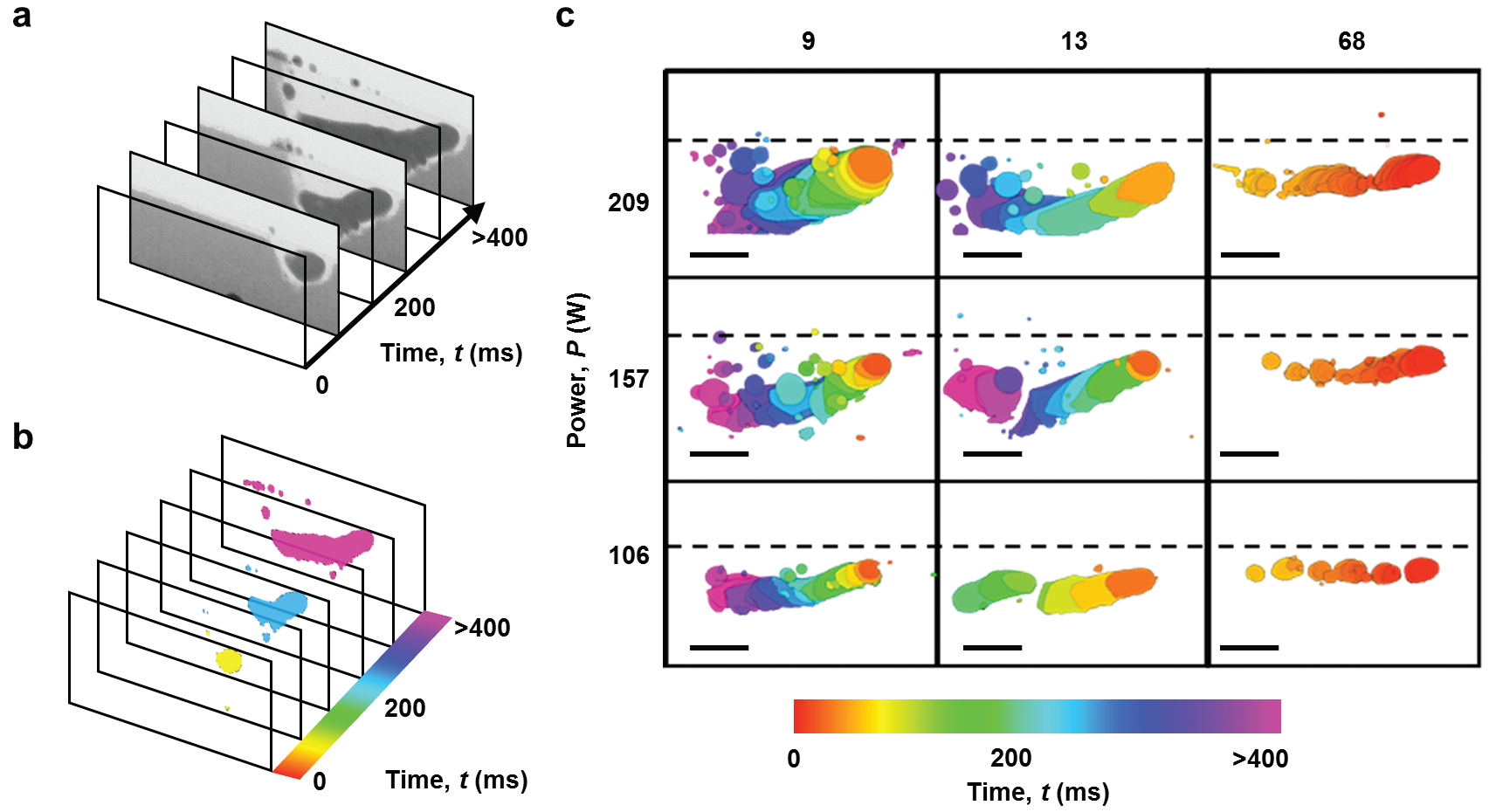 Figure 2: Melt pool dynamics of Invar 36 under overhang conditions. (a) The melt pool features were extracted from the time-series
radiographs and then (b) labelled with time, and subsequently flattened to create a time integrated image. (c) A mechanism map is
formed by collating these time integrated images with respect to their process parameters.

Third-generation synchrotron radiation sources, such as Diamond Light Source, provide high-energy and high-flux X-ray beams for high-speed imaging with high temporal (~10-3s) and spatial (~10-6m) resolution. They have been used to provide insights into a wide range of dynamic processes, including semi-solid forming, laser processing, battery failure, and volcanic eruptions. In this study, a LAM process replicator2 and synchrotron X-ray imaging were used to investigate defect and molten pool dynamic behaviour during LAM of Invar 36 powder. Invar 36 is a material of interest for precision instruments, optical devices, and aircraft tooling owing to its low coefficient of thermal expansion.

The key stages of LAM were captured by high-speed X-ray imaging at 5100 frames per second in beamline I125 (Fig. 1), including the evolution of the molten pool, melt track, defects, and denuded zone. The results demonstrate that melt tracks are formed and extended by molten pool wetting and powder entrainment. Hot powder particles and metal vapour are hypothesised to heat the surrounding argon gas at the laser-matter interaction zone, inducing a rapid gas expansion radially upwards from the molten pool surface, leading to powder spatter and droplet spatter. A new series of pore evolution mechanisms are also uncovered during LAM. Firstly, pores are formed as the melt track undergoes solidification. Secondly, they move in a circular motion inside the melt track via the centrifugal Marangoni convection, and towards the direction of the laser beam. Some pores coalesce to form larger ones and some escape into the atmosphere via pore bursting, leaving an open pore at the surface of the melt track. The results show the formation mechanism of open pores is driven by pore bursting rather than by incomplete melting or insufficient liquid feeding, as previously hypothesised. 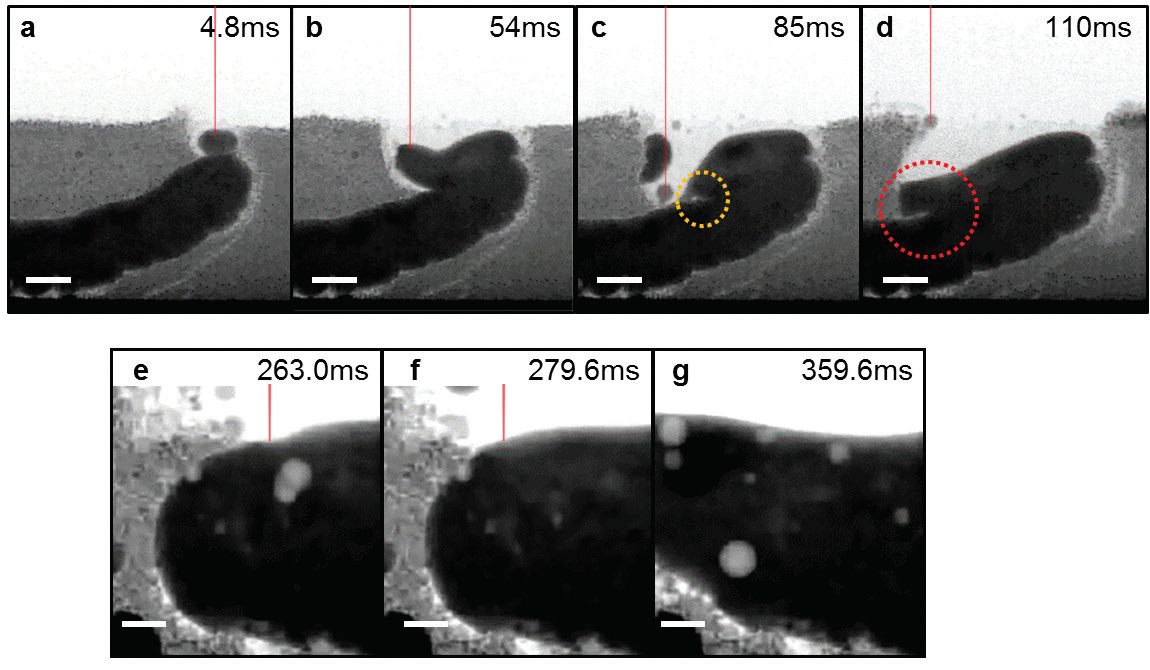 A mechanism map (Fig. 2) is developed to encapsulate the evolution of melt features, and the underlying thermophysical phenomena occur in a systemic set of LAM trials. It highlights an increase in laser power that would transfer more laser energy to the powder particles and the melt track, resulting in a violent movement of liquid metal, a frequent spatter ejection, and a deeper melt track. With increasing scan speed, less laser energy is delivered to the powder bed, lowering the temperature of the melt features while increasing their surface tension. As a consequence, the track morphology changes from a continuous hemi-cylindrical track to disconnected beads. This map emphasises the relationship between processing parameters, molten pool dynamics, and track morphology. It can be applied to other materials, processing conditions, or manufacturing processes, helping end-users to develop a more efficient processing environment.

While much can be learned from observing the complex behaviour in a single layer melt track, it is a common practice in LAM to build an additive manufactured component in a layer-by-layer manner. In the second layer melt track (Fig. 3), the molten pool wets onto the previous track and remelts it. The X-ray images show that porosity can be formed during LAM, including entrapment of gas porosity and powder particles. However, neither defects remain inside the melt track owing to the Marangoni flow that entrains the gas pores to other locations, and allows the hot liquid metal to melt the powder layer as LAM continues. We also uncover how pores coalesce together to form larger ones, dissolve back into the liquid metal due to an increase in gas solubility with increasing temperature, and then disperse into smaller pores as the temperature decreases, i.e. reduce in gas solubility.
Our results show the first example of high-speed X-ray imaging of LAM under layer-by-layer build conditions, providing insights into the molten pool and defect dynamics. This work highlights that the evolution of melt conditions strongly depends on the temperature and chemistry of the molten pool, i.e. the surface tension effect, governed by the laser processing parameters. Future investigations should focus on effective ways to control the molten pool behaviour. The reported pore evolution process is rather complex compared to what has been hypothesised in the literature, such that pores can flow, coalesce, dissolve, and disperse into smaller ones inside melt tracks during melting and solidification. The mechanism map provides users with the ability to predict and control the molten pool behaviour and final track morphology. These valuable observations can only be captured using the methods presented in this study, and play a key role in the development of next-generation additive manufacturing processes, materials, and products.