Related publication: Kleiner K., Strehle B., Baker A. R., Day S. J., Tang C. C., Buchberger I., Chesneau F. F., Gasteiger H. A. & Piana M. Origin of High Capacity and Poor Cycling Stability of Li-Rich Layered Oxides: A Long-Duration in Situ Synchrotron Powder Diffraction Study. Chem. Mater. 30, 3656–3667 (2018). DOI: 10.1021/acs.chemmater.8b00163
Publication keywords: Electrochemistry; Battery materials; Powder diffraction
Climate change, dwindling supplies of fossil fuels, and growing environmental awareness are all contributing to a surge of interest in electric vehicles. However, battery-powered electric vehicles cost more, and have a shorter range, than petrol/diesel vehicles, due to the energy density of lithium-ion batteries, for which cathode materials are currently a limiting factor.
Lithium-rich layered oxide cathode materials would fulfil the energy density requirements of the automotive industry, but commercial usage is hindered by poor capacity retention, and voltage fade, upon cycling (charge-discharge). Understanding the fading mechanism at a microscopic level is the first step to improving their cycling stability.
Using the High Resolution Powder Diffraction beamline (I11) allowed researchers to collect high-resolution, time-resolved measurements over the critical first cycle, followed by regular long-term data collections over the subsequent 100+ charge-discharge cycles. Powder diffraction is ideally suited to observing bulk structural changes occurring in battery materials, which allow for the processes leading to degradation to be better understood.
The group demonstrated, for the first time, that irreversible migration of transition-metal atoms occurs upon cycling: from octahedral sites in the transition-metal layers, via tetrahedral sites in the lithium layer, into octahedral lithium sites. Because both the reversible capacity and the cycling stability seem to be affected by this TM/Li disorder, future investigations will need to focus on how transition-metal motion can become completely reversible to ensure high capacity retention during cycling. 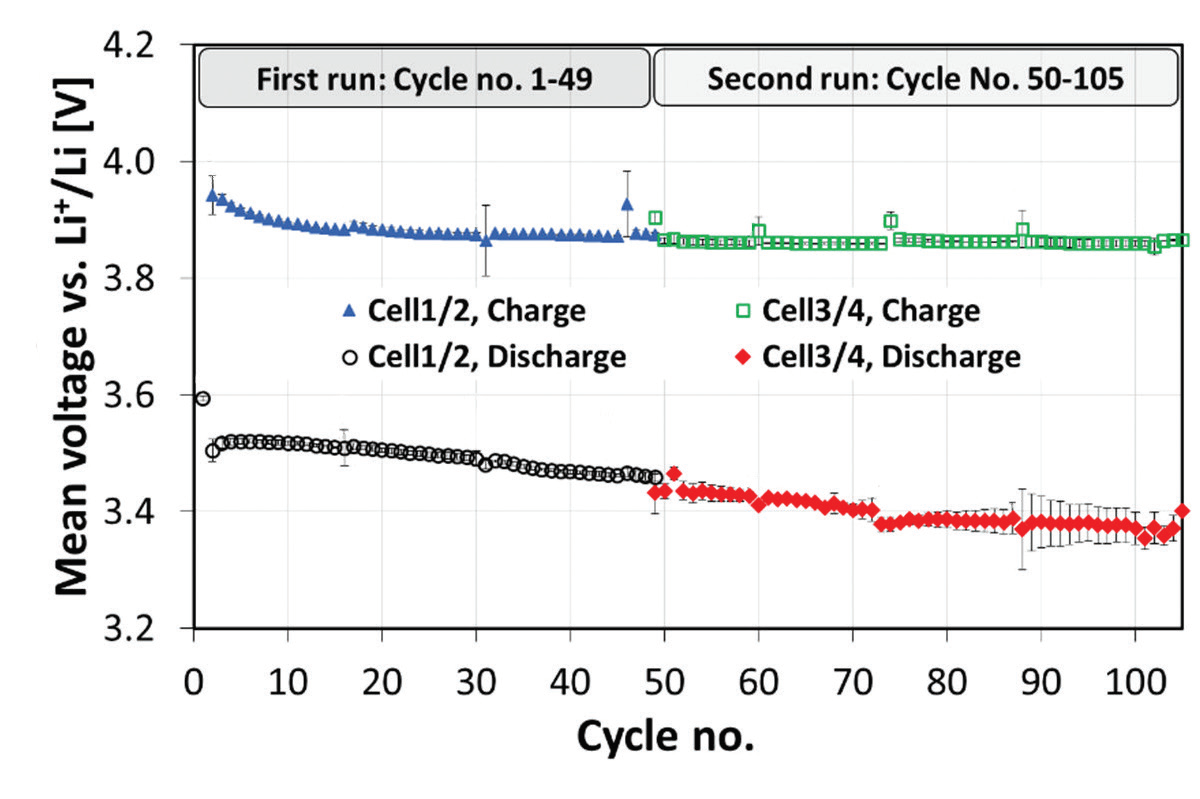 Figure 1: Mean charge and discharge voltages per cycle, measured with pouch cells on
Beamline I11. The values presented are an average of two cells cycled simultaneously, and
the error bars represent the standard deviation between the two cells. Reprinted (adapted)
with permission from Kleiner et. al., Chem. Mater. 2018, 30, 3656−3667. Copyright (2018)
American Chemical Society.

High-energy Li1.17Ni0.19Co0.10Mn0.54O2 (HE-NCM) is a lithium-rich layered oxide consisting of alternating Li and transition-metal (TM) layers in which excess lithium ions replace transition metals in the structure. HE-NCM offers a large, reversible discharge capacity of 250 mAh g-1, at least 50mAh g-1 higher than existing commercial battery materials. This improved energy density is key for meeting the requirements of the automotive industry for the large-scale commercialisation of electric vehicles, increasing the mileage range available on a single charge, and significantly reducing the cost of production. Unfortunately, these materials suffer from poor capacity retention, and voltage fade, upon cycling, limiting their lifetime and, therefore, reducing their appeal for commercialisation at present. It is, however, believed that this degradation can be overcome, but to achieve this it is first essential that the fading mechanism responsible for the degradation is well understood.
The common understanding is that oxygen release from the host structure is the main reason for capacity loss and voltage fade1, however, Transmission Electron Microscopy (TEM) studies suggest that such an irreversible lattice-oxygen oxidation would be limited to near-surface parts of the particles2. Recent electrochemical data, obtained over a period of extended cycling, is inconsistent with this theory. Fig. 1 shows the mean voltage integrated over the number of exchanged charges for 105 cycles at a rate of C/5 (one complete charge-discharge cycle in 10 hours). The mean charge voltage stays relatively constant after the first ∼30 cycles, but the discharge voltage decreases about 1 mV per cycle, indicating an asymmetric evolution of the overpotentials during cycling. This implies that a simple surface-related degradation mechanism (e.g. an impedance increase due to surface film formation), which would block both lithiation and delithiation of HE-NCM to the same extent, cannot be the only reason for the observed degradation. Instead, this suggests bulk structural changes (e.g. disorder, due to transition-metal migration) as the origin of the poor capacity retention, and theoretical calculations support the occurence of transition-metal migration during cycling3. Synchrotron X-Ray Powder Diffraction (SXPD) is a technique ideally suited to study the bulk structure of materials such as these.

For this study, I11 was used as it offers both high-resolution (HR), time-resolved (TR) SXPD, and long-duration in situ studies. SXPD data (HR and TR) were collected in Experimental Hutch 1 (EH1) to study the evolution of the lattice parameters during the first charge, while in situ long-term studies (105 cycles) from two identical battery cells were performed on the recently commissioned Long Duration Experiment (LDE) facility4. SXPD patterns were taken once a week upon long-term cycling. Using pouch cells suitable for in situ SXPD, the first cycle was performed with a C-rate of C/20 to activate the material, and all subsequent cycles were performed at a rate of C/5 between 2.0 and 4.6 V, completing 14.5 cycles each week. From this data, it is possible to determine, and quantify, transition-metal (TM) migration upon cycling by detailed reflection profile analysis, and Difference-Fourier (DF) mapping. The relationship of reversible, and irreversible, TM disorder with the strain in the material can guide improvements in the cycling stability of lithium-rich cathodes, and potentially lead to the synthesis of new application-oriented materials. Although previous studies indicate only minor changes in the bulk material, long duration in situ SXPD measurements, in combination with difference Fourier analysis of the data, revealed an irreversible TM motion within the host structure. 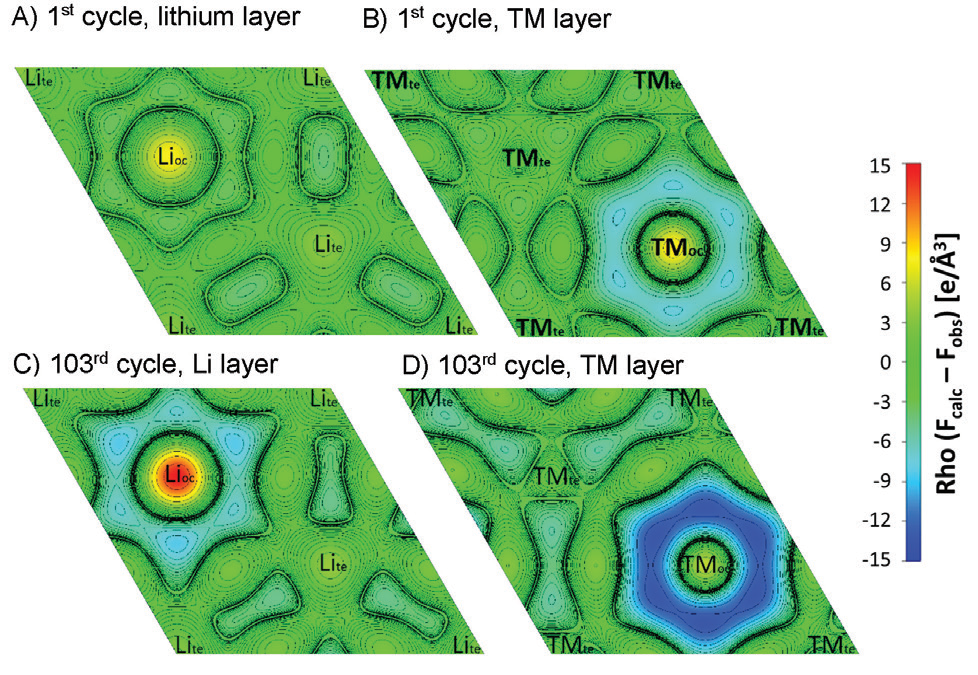 TMs tend to occupy tetrahedral sites in the lithium layer (Fig. 2B) at highly delithiated (charged) states, since the occupation of tetrahedral sites in the TM layer is less favourable due to the occupation of neighbouring octahedral sites by cationic species. A TM in tetrahedral sites of the Li-layer can then either move back to the TM layer (Fig. 2A), or move on to occupy octahedral lithium sites (Fig. 2C), leading to a delithiated, disordered structure which is thermodynamically more stable and, therefore, energetically favourable5. This disorder is identified in diffraction patterns as a mismatch in the reflection intensities, rather than changes in positions or the presence/absence of reflections. While a minor mismatch in the refined reflection intensities of the first cycle was observed, this became more significant as cycling progressed. If analysed further, the discrepancy in the measured, and refined, reflection intensities can provide useful information, as it originates from the difference between the measured, and calculated, electron density in the crystallographic structure. Due to their relatively high number of electrons, and thus their significant contribution to the X-ray diffraction profiles, TMs are the only elements in the HE-NCM structure that can cause such an effect. DF analysis of the diffraction data was performed to investigate which sites are occupied by TMs upon cycling. The DF maps of the first discharged state (Fig. 3A and B) show that the electron density of octahedral sites (Lioc and TMoc) are poorly described by the ideal rhombohedral structure, and the differences become even more significant by the 103rd cycle (Fig. 3C and D). Li/TM disorder is not observed in the first cycle of conventional layered oxides, supporting the assumption that lithium vacancies in the TM layer, created during the first charge (the so-called activation), accelerate transition-metal migration. During subsequent cycles, the disorder increases gradually, reaching roughly 5% of the transition metals in Lioc sites after 100 cycles. This observed increase of disorder leads to the conclusion that this type of migration is to some extent irreversible. Equivalent DF maps of the 1.5 and 102.5 charged states show underestimated electron densities in Lite sites (tetrahedral sites in the lithium layer). This confirms the migration of TMs via these sites in the charged state. Nevertheless, these results support the migration pathway shown in Fig. 3, and suggest that TM motion takes place at high states of charge. Migration of TMs into tetrahedral sites has to be largely reversible because no occupation of tetrahedral sites was observed in the discharged state throughout the 100 charge/discharge cycles, while Ca. 8% of the TMs occupy tetrahedral sites in the charged state. At the end of discharge, 2-5% of the TMs are refined to be in octahedral Li-sites, while the tetrahedral sites are unoccupied, strongly indicating that 3-6% of the TMs migrate reversibly back from tetrahedral sites into octahedral TM sites upon lithiation.

These results experimentally demonstrated for the first time that the transition-metal migration in lithium-rich layered oxides proceeds upon cycling, moving from octahedral transition-metal sites to octahedral lithium sites via tetrahedral sites in the lithium layer. Prior to this work, these results were only claimed by theoretical investigations. The focus of future investigations should now be to determine how TM motion can become completely reversible, to ensure a high capacity retention during cycling, rather than attempting to suppress disorder, and retain the ideal rhombohedral structure.