Aerosols – tiny particles in the air – are key to the formation of clouds, as all cloud droplets form when water droplets condense around aerosols. If the chemical properties of aerosols are modified, this can affect the size and number of droplets within a cloud, and hence how much light the cloud reflects and how much rain falls. A small chemical change can cause a climatic difference, and although this process has a significant effect on Earth’s climate, it is not well understood.

A large number of aerosols are coated with a thin organic film. Previous studies of how these organic films react with atmospheric oxidants, such as ozone, have used proxy organic material. Researchers from Royal Holloway, University of London report the first X-ray reflectivity study of real samples of atmospheric aerosols, employing the unique capabilities of the Surface and Interface Diffraction beamline (I07) to capture information on the changes that occur when the samples are exposed to atmospheric oxidants.
Surprisingly, they found that the samples did not react with ozone, although they did react with hydroxyl radicals. This may indicate that aerosols in the atmosphere are less reactive than previously thought. The organic films tested were composed mainly of saturated material, indicating that future studies should concentrate on saturated materials, rather than the unsaturated proxies generally studied. Future studies will test samples from different environments, to investigate how their behaviour may differ.

Atmospheric aerosols critically affect the Earth’s climate by directly scattering and absorbing solar radiation and indirectly through their involvement in cloud formation and their influence on cloud radiative properties1. Numerous aerosols are coated in a thin organic film, which affects their physical properties and therefore their contribution to the Earth’s climate2. As the atmosphere is an oxidising medium, it is likely that an aerosol will be oxidised in its lifetime, which will also affect the physical properties of the aerosol such as its ability to uptake water and whether it will act as cloud condensation nuclei (CCN), the precursor to a cloud droplet. Therefore, it is important to study oxidation reactions of atmospheric aerosols coated in a thin film to better understand aerosol contribution to cloud formation and cloud radiative properties and thus the Earth’s climate.

An X-ray reflectivity experiment was conducted on I07 at Diamond to study the oxidation of real organic films at the air-water interface with common atmospheric oxidants (gas-phase ozone and the aqueous phase radicals, hydroxyl and nitrate). The thickness and scattering length density of the film were monitored throughout the experiment using X-ray reflectivity. Scattering length density provides information on the chemical composition and amount of material present at the air-water interface. I07 was used because a good signal-to-noise ratio can be obtained up to high reflection angles and because of the availability of fast acquisition times.
Atmospheric aerosol samples were collected at Royal Holloway University of London using filter samplers and sampling cartridges. The site is close to central London and some of the UK’s busiest motorways. The sampling cartridges contained coated denuders to remove ambient gaseous ozone to prevent the oxidation of the material collected on the filter prior to the oxidation experiment. Surface sea-water samples were collected at Milford-on-sea on the south coast of England using a long reach sampler. In all cases, organics were extracted and stored at -18°C until use.

X-ray reflectivity studies were performed on monolayer films of atmospheric or sea-water material at the air-water interface formed on a Langmuir trough. A custom trough was set up on an anti-vibration table on the I07 beamline and reflectivity of the film was monitored before and during addition of an oxidant.

For experiments conducted using ozone as the oxidant, ozone was generated using an ozoniser and the trough was contained in a sealed chemically inert plastic bag. Kapton windows allowed X-rays to pass into the bag. For aqueous phase radical experiments, hydroxyl or nitrate radicals were generated in the aqueous subphase from photolysis of a precursor solution. UV lamps were located directly above the trough along its length to evenly illuminate the subphase.

X-rays were specularly reflected from the liquid surface onto a defined region of interest on a detector and the reflectivity of the film was measured as a function of momentum transfer of the X-rays perpendicular to the interface. The X-ray data was modelled using a simple parallel layer model consisting of the thin film located between two semi-infinite media (air and the liquid subphase) as shown in Figure 1.

Figure 1: Model for an organic film at the air-water interface.

No reaction was observed between gas-phase ozone and a thin film of material extracted from atmospheric aerosol or sea-water. The amount of material at the air-water interface remained constant throughout the experiment. Owing to this surprising result, a thin film of material extracted from atmospheric aerosol was exposed to the aqueous phase hydroxyl radical and a reaction was observed. Figure 2 shows the reflectivity profile for the reaction, the reflectivity increases as shown by the direction of the arrow as time proceeds indicating a reaction. The X-ray data was modelled3 (Fig. 3), and a clear decrease in scattering length density and film thickness was observed in comparison to the constant values observed when atmospheric film material was exposed to gas-phase ozone. 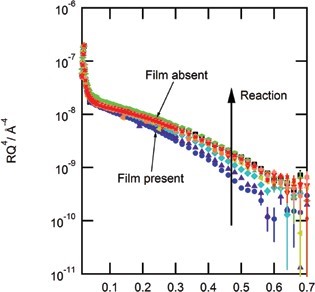 In conclusion, organic material extracted from real atmospheric aerosol and sea-water samples forms stable films at the air-water interface. The oxidation of these films has been studied using X-ray reflectivity and shown that such films are unreactive to gaseous ozone and can be modelled as a constant amount of material at the air-water interface. It is proposed that the samples either do not contain unsaturated material or contain it in very low concentrations, which is supported by multiple studies in the literature4,5which propose that unsaturated material in atmospheric aerosol is present in very low concentrations when compared to saturated material. X-ray reflectivity has shown that a thin organic film extracted from atmospheric aerosol does react with the aqueous phase hydroxyl radical and a thin organic film extracted from sea-water does react with the aqueous phase nitrate radical. Therefore heterogeneous oxidation by gas-phase ozone may not be important in the atmosphere, whereas radical oxidation appears to be important. Thus it is recommended that future proxy studies focus on radical oxidation of saturated organics. Future studies of real aerosol samples collected at different stages throughout an aerosol lifetime are also recommended to determine whether gas-phase oxidation by ozone is important at specific times.