The recent Science Division reorganisation has resulted in a rationalisation of the beamlines that were originally members of the Surfaces & Interfaces village. The new Structures and Surfaces Group consists of four beamlines, I05 (Angle Resolved Photoelectron Spectroscopy – ARPES), I07 (Surface and Interface X-ray Diffraction), B07 (Versatile Soft X-ray Scattering – VERSOX) and I09 (Surface and Interface Structural Analysis – SISA). There will be a much closer working relationship within this new structure, including more extensive internal collaborative research and improved offline facilities to serve the user community. The alignment has extended beyond just the science division and we are now able to work much more closely with engineering colleagues and software developers that are aligned with the new groups, leading to common solutions across the beamlines. Obvious overlap in the science programmes will be developed, such as Angle Resolved PhotoElectron Spectroscopy (ARPES) on I05, B07 and I09, who have also been offering hard X-ray Photoelectron Spectroscopy (HAXPES) for studying bulk electronic structures. Beamlines I07 and B07 will strengthen the programme in areas of non-ultrahigh vacuum (non-UHV) studies including catalysis and electrochemistry. The new structure will also encourage cross group developments and we expect strong interactions with the Magnetic Materials Group, Spectroscopy beamlines and the Soft Condensed Matter Group in a number of science areas such as energy materials or catalysis. The grouping will enhance our ability to work more closely with user groups, offering a comprehensive range of techniques to non-specialists that will aid understanding of their science problems. 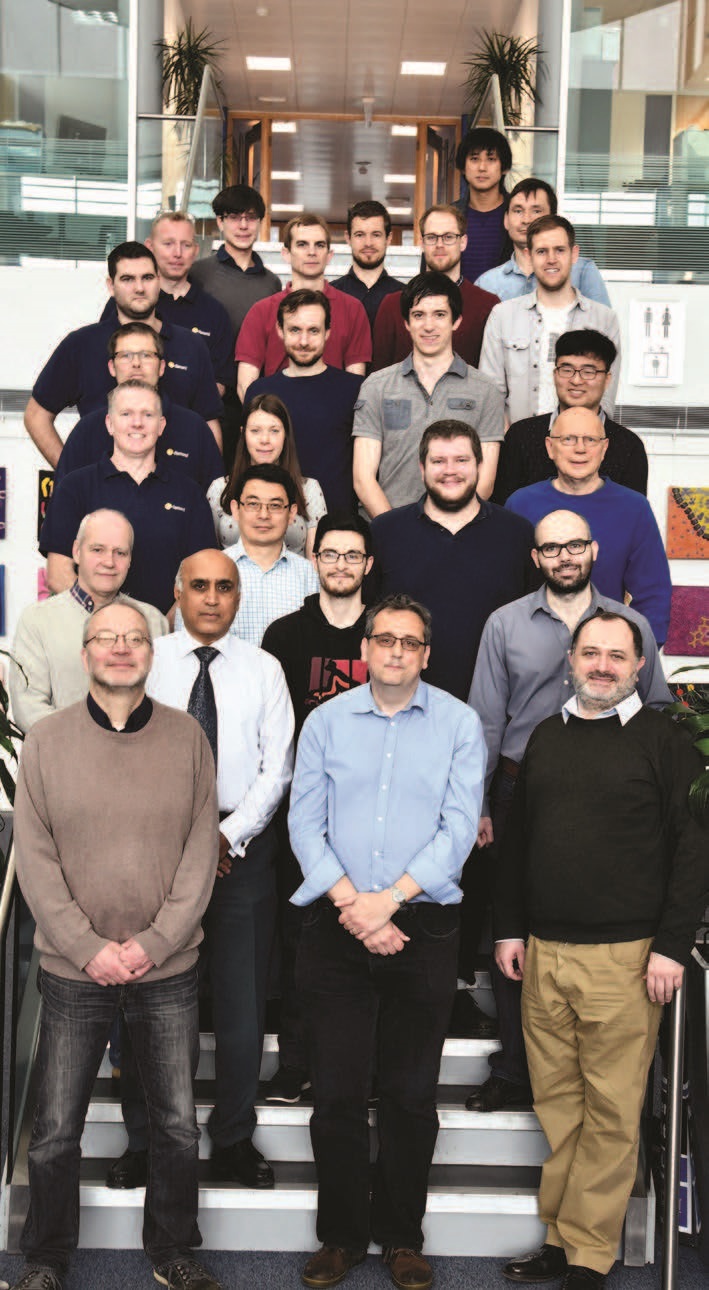 Figure 1: The scientists, engineers,
technicians and
PDRAs that make up
the Structures and
Surfaces Group.

The beamlines within the group continue to develop through a number of upgrade projects, both major and minor. VERSOX (B07) is in the process of bringing its second branch online, which will enable high throughput X-ray Photoelectron Spectroscopy (XPS) measurements on multiple samples and Near-edge Extended X-ray Absorption Fine Structure (NEXAFS) in a non-UHV environment. Together with the Near Ambient Pressure XPS experiments on the existing branch, this provides excellent opportunities to study the electronic and structural properties of different samples of relevance to a range of science areas including atmospheric chemistry, pharmaceuticals, catalysts or cultural heritage amongst others. Beamline I09 is adding new capabilities to its end station provision; a HAXPES system to enable studies of the electronic states of buried interfaces and a momentum microscope to produce images of the electron band structure directly in momentum space. Beamline I05 has two branches, one of which is the high resolution facility that has proven to be a very successful addition to the suite of beamlines, since it became operational in 2014. Many experiments make use of the in situ cleaving techniques to study novel crystal structures, whilst there is also a fully equipped molecular beam epitaxy (MBE) system attached to the end-station that can be used to produce samples in situ, as demonstrated by the successful growth of Gadolinium doped europium oxide (EuO) thin film structures. The Nano-ARPES branch has been attracting an increasing number of users that want to understand not only the electronic structure on a macroscopic scale but also to establish the real space distribution of those states. This is now possible with sub-micron resolution on the branchline and changes in the focussing optics aim to improve the resolution to less than 500 nm. Beamline I07 has been in a period of stable operation for the last few years; it is now in the process of upgrading its monochromator to a Diamond designed system. This will increase the stability of the photon beam, the first stage in improving the focusing optics to reduce the beam dimensions to a planned size of ~10 μm. Plans are also underway to upgrade the sample environments, in particular the UHV system for in situ MBE studies.

The diversity of the science programme is a strength of this group with studies ranging from the observation of novel electronic states in complex crystals to experiments on the structure of lipid layers at the air-liquid interface. This year’s science highlights cover two specific areas from this broad range of applications, namely understanding the mechanism by which ozone reacts with organic molecules in seawater and two highlights on understanding materials related to spintronics. Jones et al, used I07 to highlight the unexpected result that rather than ozone attacking organic molecules at the surface of a water layer, it seems to produce radicals in the liquid that then affect the structure of the layer. This result will cause a rethink in understanding the mechanisms occurring in atmospheric chemistry and interactions in seawater. More conventional surface science studies were undertaken on I09, where Pincellii et al have demonstrated the role of dimensionality in affecting the electronic structure in important spintronic materials. Dilute magnetic semiconductor (GaMnAs) and strained strontium doped lanthanum manganite (LSMO) samples were studies by photoelectron spectroscopy (PES) at different energies, to establish the changes in electronic structure with depth by relating specific peaks to carrier mobility in the materials. ARPES measurements on beamline I05 by Sunko et al, studied the spin-orbit splitting in the layered oxide compounds PtCoO2 and PdCoO2 both terminated with CoO2. The surprisingly large spin splitting is unexpected but can be explained by large inversion symmetry breaking related to the top surface layer. The CoO2 layer has oxygen atoms above and below the Co atoms and it is the movement of electrons through these two different routes (caused by the different environment at the surface) that produces the large asymmetry.
The members of the Structures and Surfaces Group are committed to continuing the high quality scientific output from the beamlines, through enhanced interaction with our user community. Please contact us, if you would like to discuss any of the techniques or possible experiments and how the synchrotron studies could help in your research.