Understanding the behaviour of electrons in spintronic materials

As the interface between magnetic and non-magnetic materials is a key feature of spintronic devices, it is crucial to characterise and understand both the surface and bulk electronic and magnetic properties of the materials used in their production. For transition metal oxides it appears that thicknesses on the scale of several nanometers are critical for the appearance or disappearance of desired properties, but the presence of these critical thicknesses is extremely difficult to assess.

A team of researchers led by a group from National Research Council (CNR) Trieste developed a technique to reliably and precisely detect variationsin electronic structure with depth. They used the Surface and Interface Structural Analysis beamline (I09), which allows photoelectron spectroscopy at tunable probing depths by changing the photon energy. The researchers applied their technique to two prototypical spintronic materials, and advanced theoretical modelling allowed them to attribute the results to the ability of carriers to move freely through the solid, and to precisely define the depths at which such variations take place. This is a step towards achieving the necessary precise control of spatially-confined spintronic materials. 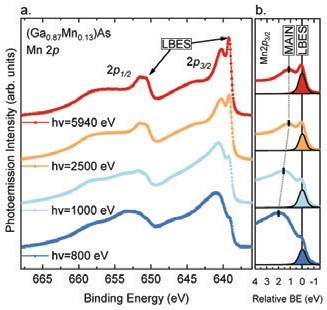 Figure 1: (a) Photon energy dependent Mn 2p core level spectra of GMA (measured with linear polarisation at T = 300 K). The spectra are shifted vertically for ease of comparison after integral background subtraction. The multiplet structures of the 2p½ and 2p3/2 are clearly resolved. The arrows indicate the position of the well-screened satellites for each spin-orbit partner; (b) Expanded view of the Mn 2p3/2 peak around 640 eV BE. The evolution the peak- fit component reproducing the LBES structure is shown as a function of increasing photon energy.

Complex materials at the focus of modern research display unusual characteristics, often termed as quantum properties. In many cases, these exhibit a critical dependence on small variations of external parameters such as temperature, electric and/or magnetic field, photoirradiation and strain. Spintronics is a highly active field, exploiting quantum properties to achieve simultaneous manipulation of transport and magnetic ordering, with the perspective of realising extremely compact and efficient devices.

The integration in nanoscale components, however, faces spintronics with the challenges of spatial confinement. Lattice distortions, stoichiometry changes, surface states and orbitals population rearrangements alter the electronic structure when the crystal is interrupted. The unperturbed configuration is recovered only in the bulk. The introduction of a long-range order parameter such as magnetic alignment adds a further characteristic spatial scale that concurs with the ones of charge-driven interactions to create an intricate picture.
Evidence is accumulating that critical thicknesses are encountered frequently when assessing properties such as two dimensional conductivity1, magnetoresistance2 and ferroelectricity3. The term indicates the region of the solid in which radical changes in the electronic structure are produced by the crystal interruption: films below these thicknesses do not possess the desired emergent properties (although they may bear other ones). 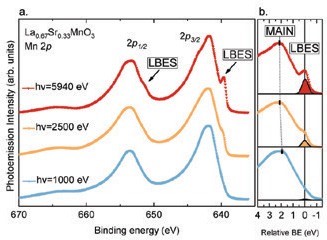 Figure 2: (a) Photon energy dependent Mn 2p core level spectra of LSMO (measured with
linear polarisation at T = 200 K). The spectra are shifted vertically for ease of comparison after integral background subtraction. The arrows indicate the position of the well-screened satellites for each spin-orbit partner; (b) Expanded view of the Mn 2p3/2 peak around 640 eV BE. The evolution the peak-fit component reproducing the LBES structure is shown as a function of increasing photon energy. Note that at hv = 1000 eV the well screened intensity is clearly present in GMA, while almost absent for LSMO.

It often difficult to understand whether critical thicknesses arise from intrinsic effects, controllable by interface engineering, or from extrinsic, uncontrollable processes. Such a problem indeed requires the resolution of the electronic structure of a single system, and virtually a single sample, by a technique of intrinsic probing depth tuneable across the surface region. 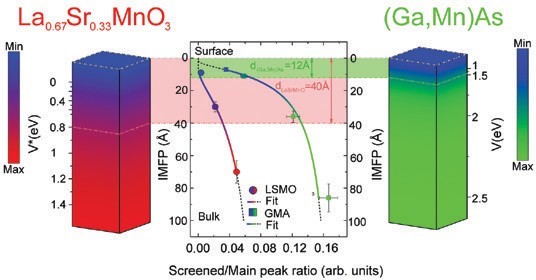 Figure 3: Central panel: relative amplitude of LBES plotted as scatter points for LSMO (circles) and GMA (squares). The vertical error-bar is 10% of the IMFP. The horizontal one is obtained by propagation of uncertainty on peak-fitting parameters. The curves show the fitted functions, dashed outside the data-points. The green (red) shaded area defines the crossover thickness for GMA (LSMO). The parallepipeda schematise the solid: a gradient reproduces the relative intensity of the LBES in GMA (LSMO), blue corresponding to zero and green (red) to the maximum in the 0-100 Å range; a tick-scale shows the evolution of the theoretical hybridisation parameter.

An effective approach has been achieved by the study of core-level satellites in photoelectron spectroscopy (PES)4,5. Indeed, during the photoemission process, photoionised atoms are projected in a set of final states depending on the mechanisms available to screen the core charge, giving rise to satellites. A subset of these, observed at lower binding energy than the main line (low binding energy satellites, LBES), is sensitive to carrier mobility. Cluster-model calculations4,5 define such sensitivity with the hybridisation parameter, which quantifies the contribution of mobile states to the equilibrium electronic structure.

In complex materials, LBES are enhanced (or appear altogether) when the probing depth of PES is increased to deeper regions below the surface. Indeed, by increasing the excitation photon energy from 800 eV to 6 keV, the depth probed by PES extends from 1 nm to 10 nm, thus spanning the transition from surface to bulk properties. In order to use this approach to confirm or disprove interpretations, however, it must achieve quantitative precision.

This possibility is offered by the combination of hard and soft X-ray photoelectron spectroscopy (respectively HAXPES and SX-PES) in consistent experimental conditions at Diamond’s Beamline I09. It was applied to two prototypical spintronics systems: the rare-earth-doped manganite, La1-xSrxMnO3 (LSMO), and the most representative diluted magnetic semiconductor, (Ga,Mn)As. In both systems, the relationship between electronic reconstruction and magnetic properties, as well as the competition between electron localisation and hybridisation, are relevant in determining the Curie temperature (TC) and ferromagnetic state.

The Mn 2p core-level spectra (Fig. 1a, Fig. 2a, respectively) were measured substrate), as a function of increasing photon energy, i.e. with increasing probing depth. The LBES features were clearly observed.

The evolution of the intensity of the LBES versus photon energy could be determined by a line shape analysis (Fig. 1b, Fig. 2b), allowing for the development of a quantification procedure (Fig. 3). The relative amplitude of the LBES component was plotted, for each photon energy, against the corresponding inelastic mean free path (IMFP) of the electrons, defining the corresponding probing depth. The resulting plot was fitted by considering an exponential attenuation of the LBES through the surface layer, whose thickness dwas the fitting parameter. A value d=1.2 nm was found for (Ga,Mn)As and d=4 nm was obtained for LSMO. LSMO was also measured in three strain states induced by substrate mismatch, finding no detectable modifications in d.

The relative energy distance between the LBES and the main line also provided a precise method to compare experiments with state-of-the-art cluster-model calculations, and thus to create (Fig. 3) a vertical scale of the variation of the hybridisation parameter, which, consistently, changed more drastically within the critical thickness in both materials.

In conclusion, it has been demonstrated that the combination of SX-PES and HAXPES can be used to quantify the characteristic scale of the modifications of the electronic structure produced by the surface in complex materials. Such an approach paves the way for methodical discrimination between competing models of the effects of vertical confinement. Finally, precise means to draw a comparison with calculated spectra has allowed reliable attribution of the bulk properties to the increased hybridisation of the ground state with high mobility states.

Funding acknowledgement: This work has been partly performed in the framework of the nanoscience foundry and fine analysis (NFFA-MIUR Italy) facility.