The surfaces of materials can host unique electronic properties, where the electrons behave very differently from the interior. All electrons possess a magnetic moment, their spin, but in most non-magnetic materials electrons with different spins behave in the same way. This may not be the case at surfaces, where a splitting of states of opposite spin may be observed. This leads to novel electronic phases, an interesting area of fundamental research but also for potential applications in spin-controlled devices. For spin-splitting to be useful in electronic devices, it is often necessary to maximise the size of the splitting.
Researchers from the University of St Andrews and the Max Planck Institute for Chemical Physics of Solids in Dresden investigated the origin of large spin-splitting on cobalt-based delafossite oxides. They used high-resolution angular resolved photoemission measurements on the dedicated beamline (I05), which has a small light spot, high flux and excellent manipulator control that makes it ideal for measurements on small samples.

Their results show that spin-splitting in delafossite oxides reaches as much as the full strength of the spin-orbit coupling of the relevant orbitals. This highly surprising result is a consequence of unusually strong symmetry breaking at the surface, enabled by the crystal structure. This insight could be used to design new materials exhibiting record-breaking spin-splitting. 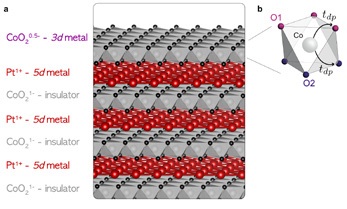 Figure 1: (a) Crystal structure of PtCoO2. In the bulk, triangular Pt layers (red) are separated by insulating CoO2 layers. If the CoO2 layer is found on the surface it becomes effectively hole-doped and metallic. (b) One CoO2 octahedron, a basic structural unit of the CoO2 layer. At the surface the hopping path through the top oxygen (O1) is preferred, causing the large inversion symmetry breaking, and eventually the large spin-splitting.

Delafossites are layered oxide compounds of the general formula ABO2, in which triangularly coordinated noble metal (A, A=Pt,Pd) layers are separated by transition metal oxide (BO2, B=Co, Rh, Cr) blocks (Fig. 1a). The platinum and palladium based delafossite metals have a single, fast Pt/Pd based band crossing the Fermi level, and making a hexagonal Fermi surface. Their room temperature conductivities are among the highest of any metal, and higher per carrier than that of elemental copper1. Their low temperature mean free paths are extremely long, reaching as much as 20 μm (~105 lattice spacings) in as-grown PdCoO2. The long mean free path has led to the observation of a number of anomalous transport properties, including hydrodynamic electron flow.

While this fascinating transport is taking place in the noble metal, the transition metal oxide layer of PtCoO2 and PdCoO2 is insulating. This is because the Co3+ is in the d6 configuration, with the t2g-like orbitals completely occupied and eg-like orbitals empty. The bulk compound can thus be thought of as a natural heterostructure, with alternating metallic and insulating layers.

The natural layers make delafossites particularly suitable for the study of their surfaces, which can quite generally be expected to exhibit behaviour different to that of the bulk layers2,3. This is easy to see using a simple ionic picture to describe the charge of the layers; in the bulk each A ion donates half an electron to the oxygen below and half an electron to the oxygen above it. This obviously cannot take place at the surface; if the BO2 layer is at the surface, this should become hole-doped with respect to the bulk layer, and could be expected to become metallic.
In this work, angle-resolved photoemission (ARPES) showed two Fermi surfaces arising from the CoO2 terminated surfaces of PtCoO2 and PdCoO2, in addition to the bulk Fermi surface (Fig. 2a). Further spin-resolved ARPES measurement revealed the two surface Fermi surfaces to carry an in-plane chiral spin polarisation of opposite sign, similar to the well-known Rashba effect (Fig. 2b). While a combination of time-reversal symmetry and inversion symmetry ensure the spin degeneracy of electronic states, the natural breaking of inversion symmetry at every surface enables such a spin polarisation to develop. 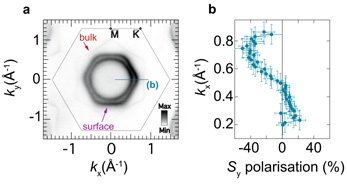 The qualitative observation of the spin-split states on a surface is thus not unexpected, however the size of the splitting observed is surprising. To see this, one needs to compare the size of the splitting in the delafossites with other well-known systems. The splitting in momentum in the delafossite reaches as much as 0.13 Å-1, comparable to 0.1 Å-1 in BiTeI and 0.26 Å-1 in Bi/Ag surface alloys4. Those are some of the largest momentum splittings known, and it is no accident they are typically found in bismuth containing compounds, as the atomic spin-orbit coupling (SOC) of bismuth 6p orbitals is as large as 1500 meV. The spin-orbit coupling of Co is only 70 meV, 20 times weaker! The observation of such large splitting in the delafossites is thus highly surprising, and requires further explanation.

The key point is the structure of the top CoOp2 player (Fig. 1b). Co electrons can hop from one Co to another either via the oxygen in the layer above (O1), or via the oxygen in the layer below (O2). In the bulk these two paths are equivalent, however the top oxygen has no noble metal above it. This causes an on-site energy shift between the two oxygens, and makes the hopping path through the surface oxygen much more likely. The inversion symmetry breaking is no longer a small perturbation of the dominant kinetic hamiltonian; rather the kinetic hamiltonian itself becomes asymmetric. This asymmetry of hopping integrals is estimated to be about 40%, or about 150 meV. This is more than twice the atomic spin-orbit coupling of cobalt, allowing the spin splitting to assume the full atomic spin-orbit coupling strength, as observed.

To conclude, it has been shown here that a 'recipe' for achieving large spin-splitting is to use heavy elements with large atomic spin orbit coupling and large orbital overlaps in a structure where the preferred hopping paths are out of plane. Due to the loss of bonding at a surface such kinetic energy will become asymmetric, and introduce a large inversion symmetry breaking energy scale, allowing the full spin-orbit coupling energy to be utilised in spin-splitting surface states. 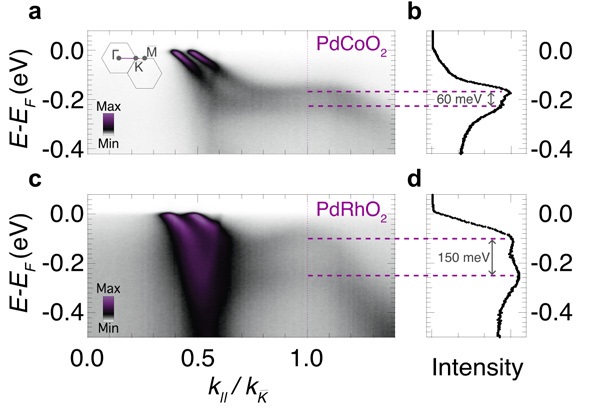 Figure 3: Spin-split surface states of PdCoO2 (a) and PdRhO2 (c), indicating a spin splitting that scales with the SOC strength of the B-site transition metal. The splitting retains the strength of the atomic SOC of the transition metal even as this strength is increased by a factor of approximately 2.5 on moving from Co to Rh. This is particularly evident from the spin splitting at the K point (dashed lines in a and c), which is clearly visible in the energy distribution curves shown in (b) and (d).

Funding acknowledgement:
The work was supported by the European Research Council (via the QUESTDO project), the UK Engineering and Physical Sciences Research Council, the Royal Society, the Max-Planck Society, and the International Max-Planck Partnership for Measurement and Observation at the Quantum Limit.
Corresponding author: Veronika Sunko, University of St Andrews & Max Planck Institute for Chemical Physics of Solids, vs61@st-andrews.ac.uk