Some diseases, including cancer and ischemia (an inadequate blood supply to an organ or part of the body), involve reversible phosphorylation at a given site on the cytochrome c protein. Cytochrome c is essential for human metabolism and contains a heme iron, which allows it to function as an electron carrier. To understand the molecular basis underlying the effects of phosphorylation, an international team of researchers has used several methods to analyse the structure, dynamics and functional features of an engineered, stable variant of cytochrome c.
The aim of the work was to understand how a change in the protein affects its function within the cell, and the team used X-ray Absorption Spectroscopy (XAS) to determine the protein’s structural features. They chose the Versatile X-ray Spectroscopy beamline (I20), in particular the I20-Scanning branchline for its ability to measure highly diluted biological samples. Nuclear Magnetic Resonance (NMR) showed that cytochrome c phosphorylation only induces local structure changes, hardly affecting the overall protein conformation. Both XAS and NMR experiments showed an increase in the mobility of the protein region surrounding the mutation and the heme group, explaining the observed functional changes. 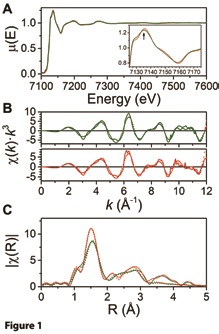 Figure 1: X-ray absorption spectra. (a) Overlay of the X-ray absorption spectra for reduced WT (red) and Y48pCMF (green). Insert: detailed view highlighting the differences within the XANES region. (b) EXAFS extracted signals. (c) Overlay of the Fourier transforms of the EXAFS spectra. In panels (b) and (c), continuous lines correspond to experimental data and dotted lines to theoretical fits.

The response of cells to physiological changes and oxidative stress involves the modulation of mitochondrial respiration. This affects the intrinsic activities of the electron transport chain components and their assembly within the internal mitochondrial membrane. In fact, hypoxia induces the grouping of these proteins into the so-called supercomplexes, which facilitates the transfer of electrons between the distinct components of the electron transport chain, while decreasing the generation of reactive oxygen species (ROS). The best known supercomplex is called the respirasome, and encompasses the membrane complexes I, III and IV. Alterations in the formation of the supercomplex lead to the development of hypoxia-dependent pathologies, such as cancer or ischemia. A key modulator of the mitochondrial activity is cytochrome c (Cc)1. Cc is a small heme-protein which acts as an electron carrier between complexes III and IV; and is highly conserved throughout evolution. Cc also participates in cell life and death decisions in mammals2 and plants3. This pleiotropic role of Cc makes post-translational modifications an essential mechanism to regulate its functions tightly. Phosphorylation and nitration of tyrosine residues stand out among these modifications. Indeed, they affect the conformational equilibria of the protein along with its ability to bind physiological partners3,4.
Specifically, post-translational Cc phosphorylation at tyrosine 48 is key in modulating mitochondrial signalling. Nevertheless, the mechanism by which it alters the conformation and function of this protein is barely understood. To address this subject requires solving the 3D structure of the phosphorylated species. However, cell-extract phosphatases reverse Cc phosphorylation, hampering the isolation of the modified protein from tissues. This makes any structural analysis a highly challenging task. Hence, we solved the 3D solution-structure of a Cc phosphomimic obtained by replacing tyrosine 48 with the synthetic amino acid p-carboxy-methyl-L-phenylalanine (pCMF)5.
In order to do this, the effects of the mutation on the heme iron coordination sphere were tested. First, distance restraints relative to the axial coordination of iron were necessary for the structure computations. All the reported mutants mimicking phosphorylation in this position displayed altered biophysical properties related to conformational stability of the heme moiety3,5. Thus, a precise assessment of the changes in coordination geometry of the heme iron was required. Figure 1a shows the XAS fluorescence spectra at the Fe K-edge of wild-type (WT) and mutant (Y48pCMF) Cc species at cryogenic temperatures, recorded at the I20-Scanning beamline. Notably, the absorption spectra of the two proteins are very alike. Both spectra include the pre-edge feature at ca. 7113 eV, indicative of the octahedral geometry for the first iron coordination sphere. Overall, the X-ray Absorption Near Edge Structure (XANES) region of the spectra for the two Cc species are almost identical, as can be seen in the figure. The absorption edge appears at 7126 eV in both cases, indicating that the oxidation state of the metal ion is not affected by the mutation. However, some spectral features are broadened for the Y48pCMF Cc, as is the case of the feature at 7136 eV, related to porphyrin plane distortion.

Figure 2: Structural changes in cytochrome c upon phosphorylation. (a) Richardson’s ribbons representation of the NMR structures of WT (red; pdb code: 2N9I) and Y48pCMF (green; pdb code: 2N3Y) species. The positions of the N- and C- termini are labelled. (b) Overlay of the heme groups of the two cytochrome species. The targeted residue is also shown. Bonds are represented by sticks. Heavy atoms are in CPK colors, except for Y48pCMF carbons (in green).

The Extended X-ray Absorption Fine Structure (EXAFS) signals and the corresponding Fourier transforms are shown in Figure 1b and Figure 1c respectively. The Fourier transforms indicate an increase in disorder for the first coordination sphere around the iron centre for the mutant species. After an initial estimation of the distances between metal and ligand using X-ray diffraction data, a cyclic refinement was performed by selecting coordinates from 10000 snapshots of Molecular Dynamics computations, which determined the lowest squared deviations in distances for the distinct scattering paths selected. Interestingly, there was no significant difference in metal-to-ligand distances in between the two species. Nevertheless, Debye-Waller factors indicated an increase of the disorder in the equatorial ligands – those belonging to the phophyrin ring – in agreement with the broadening of the 7136 eV feature in the XANES region and the decrease of intensity of the first peak of the Fourier transform.

The solution structure of the phosphomimic mutant revealed small, but significant conformational changes in loops containing the phosphorylation site and adjacent residues providing axial ligands for the heme iron (Fig. 2). Furthermore, NMR relaxation data and the presence of signals undergoing slow chemical exchange indicated that phosphorylation enhanced the dynamics of the above-mentioned loops – which surround the heme group. Notably, this facilitates the access of water molecules into the heme pocket. To summarise, the NMR and XAS data indicated that the mutant showed both similar overall 3D structure and iron coordination geometry to the WT protein, but exhibited enhanced dynamics. 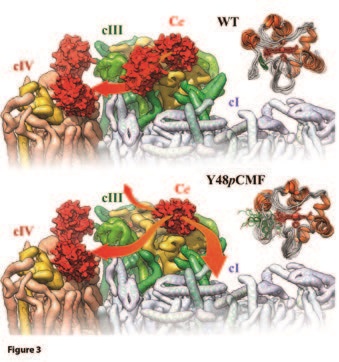 Figure 3: Paths for cytochrome c diffusion from cytochrome c1 to cytochrome oxidase across the respirasome surface, according to NMR and functional data. Upper: Cytochrome c (Cc) undergoes diffusion restraints (channelling) when carrying electrons from complex III to complex IV that yields a higher performance of the electron carrier. Lower: Phosphorylation enhances the internal motions of Cc and the loss of a secondary binding site in complex III makes Cc drift towards the bulk mitochondrial intermembrane space.

Phosphorylation may affect the interaction between Cc and its partners by several means. The addition of a phosphate results in Cc carrying a negative charge, with a significant impact. Additionally, enhanced dynamics in the unbound species increases the conformational entropy penalty. In fact, NMR and Isothermal Titration Calorimetry (ITC) data indicate that one of the two reported docking sites for Cc at its electron donor (complex III) is lost. In the context of the respirasome supercomplex, the docking site which the modified Cc no longer bind lies on the pathway towards its electron acceptor (complex IV). This site was proposed to be involved in restraining the diffusion path of Cc across the respirasome surface (Fig. 3).
To test this hypothesis, yeast mitochondria preparations were prepared under conditions, either avoiding or eliciting supercomplex formation. The performance of WT and mutant Cc species was tested. No difference was found between the two species when supercomplex formation was inhibited. However, when supercomplex assembly was favoured, the activity of Cc as an electron carrier for complex IV increased – according to oxygen evolution measurements – but the activity of the phosphomimic mutant was substantially lower when compared to the WT species.
High complex IV activity has been related to ROS generation1. Hence, the inhibition of the electron shuttling from complex III by phosphorylation of Cc may downregulate such a harmful side-reaction. In addition, phosphorylated Cc shows an enhanced peroxidase activity – probably due to higher heme accessibility – which makes it a better ROS scavenger. These findings will eventually aid the development of a robust therapeutic approach, either to foster or silence, as required, the pro-survival action of phosphorylated Cc reported here.