Nanocrystallites on micro-catalysts brought into focus

The Fischer-Tropsch process is used to convert hydrogen and carbon monoxide to hydrocarbons. It relies on the use of catalysts, which make the process more efficient and can control which products are produced, from long hydrocarbon chains to heavy waxes. A team of researchers developed a novel technique to investigate how cobalt catalysts change, at both the micro- and nanoscale, during the Fischer-Tropsch process. They used the Microfocus Spectroscopy beamline (I18) which allowed them to focus X-rays down to the microscopic sizes (5 μm) needed for the study, and to collect all of the different modes of characterisation (absorption, diffraction, fluorescence, mass spectrometry) simultaneously. This was the first simultaneous measurement of all the characterisation techniques on the beamline.

Their work investigated the influence of the deposition sequence on the chemical and physical structure of the catalyst, in 3D, under conditions close to those used in large scale reactors, so the observed structure and activity relationships from the experiment are relevant to the full scale reactors. Their results show that even small modifications in how catalysts are made can significantly affect their performance. 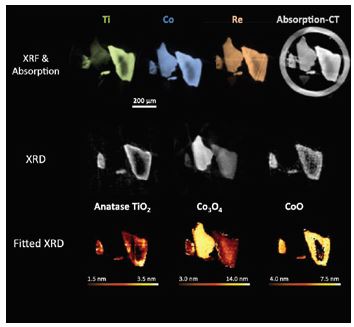 Many active catalysts consist of metal nanoparticles supported on larger grains of refractory oxides, such as silica (SiO2), titania (TiO2), alumina (Al2O3), or a mixture thereof. This helps optimise the metal nanoparticles dispersion and improve the long term stability. Recently, additional metals have been added to the catalyst in small amounts to 'promote' the activity further (e.g. rhenium, platinum), and help control the long term stability of the particles1. These compound systems are now the catalyst of choice at many plants. However, with the increase in constituents comes and increase in complexity, both in how they can be synthesised, and the resultant chemical and physical structures that are formed. One factor that can affect this is the order in which the catalyst and promoters are added to the support. To that end, two samples were prepared with identical elemental compositions (10 wt% cobalt, 1 wt% rhenium, 5 wt% titanium, supported on silica – CoRe/Ti/SiO2). The Re is a promoter for the Co to lower the temperature needed to reduce it from an oxide to a metal, the state required to perform FTS, and the Ti is a modifier for the silica support to aid the interaction with Co. The difference between the two samples being whether Ti was added first or last to the support material. Differing activity (conversion of CO) and selectivity (formation of desired long chain hydrocarbon products) were observed between the two catalysts, however the reasons for this were not fully understood. Previous studies of similar materials to determine the active state of the catalyst were bulk measurements of an area in a reactor and therefore only revealed the average composition present2; supported catalysts possess complex micro- and nano- structures that need to be considered to fully understand the relationship between structure and performance. To this end, the multimodal tomography set up was developed on beamline I18. A microreactor was developed that could be scanned through the highly focussed X-ray beam (5 μm), and X-ray diffraction (XRD), X-ray fluorescence (XRF) and X-ray absorption data collected simultaneously. By rotating the reactor in the path of the beam as well as scanning it, this data could be collected at different angles (computed tomography, CT), which when reconstructed revealed the location of each grain within the reactor, and the locations of each element and crystalline phase present within each individual grain3.

When Ti is added first it is oxidised and partially crystallises on the large SiO2 grains forming the anatase polymorph of titania (TiO2). Typically, in the precursor material, the Co is present in the spinel form Co3O4, however in regions where anatase is concentrated a small proportion is reduced to CoO (Fig. 1). A typical bulk XRD measurement would not have been able to reveal this relationship. Once the cobalt oxide is reduced to metallic cobalt (400 °C H2), no traces of either oxidic phase remain. However, once FTS conditions are started (200 °C 2H2:CO), the smallest Co nanoparticles that are co-located with anatase are susceptible to re-oxidation back to CoO (Fig. 2).

For the catalyst where Ti is added second, after the Co and Re, it does not crystallise, however there is still a small an amount of CoO present in the precursor material in regions with high Ti concentration, indicating that the formation of CoO is not dependent on crystalline TiO2. Once through the reduction cycle and into FTS conditions, the catalyst is stable against reoxidation, with only metallic Co forming.

Furthermore fitting of the diffraction patterns revealed information on the nature of the metallic Co. Typically, metallic Co packs together in two different forms, cubic and hexagonal (Fig. 3). A third, disordered, form of packing known as intergrown Co is also possible; as this is a random mixture of cubic and hexagonal packed layers, it results in broader, less intense diffraction peaks, and is harder to quantify. For both catalysts studied here, fitting of the XRD data revealed the degree of intergrowth can be directly correlated with the Ti modification on the silica support. When Ti is deposited before the Co, it increases the strength of the metal support interaction and results in smaller, strained Co nanoparticles (a result of a higher degree of intergrowth) therefore explaining why they are prone to reoxidation under FTS conditions (Fig. 2). The weaker metal support interaction when Co is deposited first means the Co atoms are more mobile, forming larger crystallites that are less strained, with a lower degree of intergrowth and therefore more stable once under FTS conditions. 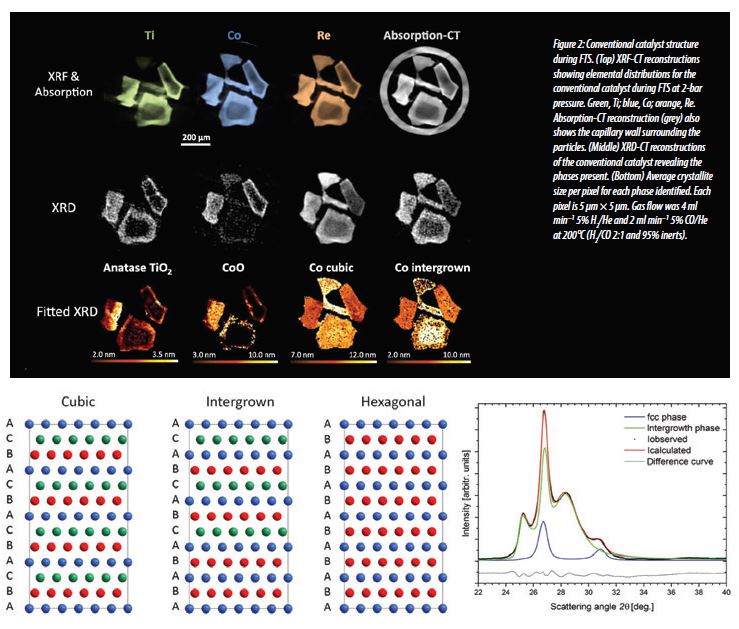 In both cases, however, the degree of intergrowth (i.e. disorder) in the Co is linked to the concentration of Ti and not its crystallinity. The Co nanoparticles formed when Ti is deposited first are smaller and more active to CO conversion, whereas when Ti is deposited second, the Co nanoparticles formed are larger and have greater selectivity towards longer chain hydrocarbon products.

The complex relationships between elemental and crystalline phase distributions could only be revealed by the multimodal tomography technique developed and, crucially, correlation of structure with activity and selectivity was possible as the data was recorded whilst the catalyst was operating. The understanding of how the degree of disorder affects catalyst activity and selectivity has not been considered to the same extent as the effect of nanoparticle size has. This opens the way to new means to tune catalyst selectivity for FTS, and in a broader sense, the techniques developed here can pave the way for studying other catalytic reactions.

Funding acknowledgement: We thank Diamond Light Source for access to beamtime. We acknowledge the University of Oslo for access to high-performance computing (NN2875k), the Engineering and Physical Sciences Research Council (EP/K007467/1), Vetenskapsrådet (Sweden; VR-2012-5240) and the Science and Technology Facilities Council for additional funding.