Unravelling the mechanisms of immune escape by acute myeloid leukaemia

Acute myeloid leukaemia (AML) is a type of blood cancer that originates from white blood cells in the bone marrow. It is often fatal and is considered one of the most common cancers of children and the elderly. The high mortality rate associated with this cancer can partly be ascribed to ineffective current treatments, which consist of aggressive chemotherapy and stem cell transplantation. There is a great need to find alternative treatments for AML patients to improve their outcomes. By understanding the molecular mechanisms employed by AML cells to proliferate and avoid detection by the immune system, it is hoped this unmet need could be fulfilled.
Synchrotron Radiation Circular Dichroism (SRCD) spectroscopy at beamline B23 was used to probe the interactions of proteins involved in a molecular pathway responsible for AML immune escape. It was found that the pathway did not exist in healthy cells and was unique only to AML. The pathway results from a malignant transformation that involves the secretion of an immunoprotective protein, galectin-9, and the expression of a neuronal receptor, latrophilin 1, which triggers exocytosis upon interaction with other cells or soluble factors. The proteins help to impair parts of our immune system that try to destroy the cancer cells. Therefore, targeting this pathway could significantly enhance the patients’ immune defences and thus might be considered as a fundamentally new strategy for anti-AML therapy. 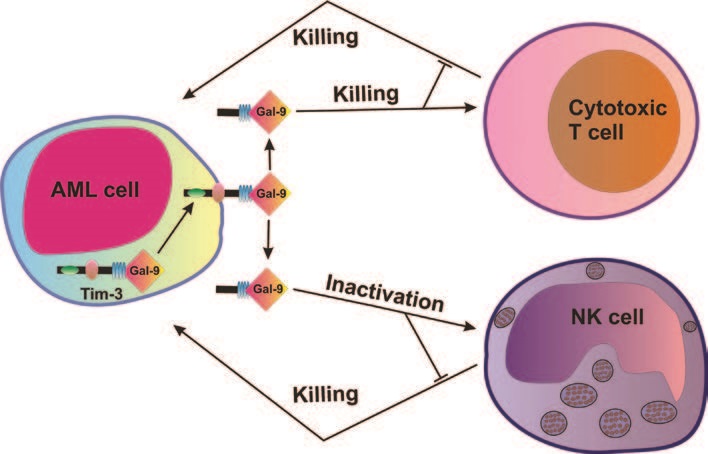 A fundamental biochemical pathway2 was discovered, which includes ligand-dependent activation of latrophilin 1, a neuronal receptor that facilitates exocytosis and is expressed in malignant but not healthy human myeloid cells3. This results in increased translation and secretion of the immune receptor Tim-3 and its ligand galectin-9. The process depends on activities of protein kinase C and mammalian target of rapamycin (mTOR). Tim-3 was found to have a dual role in the whole process by participating in galectin-9 secretion and by being released in a free soluble form. Galectin-9 impairs the anti-cancer activity of NK cells while free soluble Tim-3 attenuates secretion of interleukin-2 (IL-2) required for development of NK cell cytotoxic activity. These results were validated in ex vivo experiments using primary samples obtained from AML patients. Tim-3/galectin-9-dependent impairing of anticancer activity of cytotoxic lymphoid cells is summarised in Figure 1.

Figure 2: Tim-3-galectin-9 interaction leads to significant conformational changes possibly increasing solubility of the protein complex. (A) The schematic structural models of galectin-9 (on the right) and extracellular domain of the Tim-3 (on the left). In the structural model of the Tim-3, amino acids involved in galectin-9-independent binding are highlighted using green colour. Amino acid residues of the Tim-3, which are potential targets for glycosylation, are highlighted using red colour. (B) The SRCD spectroscopy of galectin-9, Tim-3, and the complex made by both proteins. (Adapted from Gonçalves Silva, I. et al.2)

Synchrotron radiation circular dichroism (SRCD) spectroscopy at beamline B23 was used to characterise the secondary structure of Tim-3, galectin-9 and the complex made by these two proteins presented in Figure 2a. Structural organisation of both Tim-3 and galectin-9 are presented in the Figure 2a. It was found in earlier studies that galectin-9 interacts with non-glycosylated Tim-3 with high affinity (Kd = 2.8 × 10−8 M)4. However, this binding is further strengthened by interaction of galectin-9 with sugars of glycosylated Tim-3. In AML cells Tim-3 undergoes glycosylation2 which means that its affinity to galectin-9 is very high in AML cells. This assumption was confirmed by the fact that the complex is detectable by Western blot analysis, which suggests a strong high affinity binding between the two proteins2,5. SRCD spectroscopy was also applied to galectin-9 and Tim-3 mixed to a stoichiometry of 1:1 molar ratio (Fig. 2b). When mixed together with Tim-3, galectin-9 showed a CD spectrum which was clearly different from the simulated spectrum. This suggested that the interaction of Tim-3 with galectin-9 caused a conformational change of both proteins. An obvious increase in β-strand component was observed. Based on these findings, one may suggest that Tim-3 binding possibly alters the conformation of galectin-9. This results in increased capability of galectin-9 to interact with receptors in target cells. Galectin-9 is a protein, which contains two sugar-binding domains. Therefore, one domain could bind Tim-3 (or other proteins/receptor/trafficker) and leave the other domain open for interaction with a receptor molecule (for example Tim-3) associated with the plasma membrane of a target cell (for example NK cell or cytotoxic T cell).

This discovery opens new avenues for development of anti-leukaemia immunotherapy. Targeting this pathway might crucially enhance the patients’ immune defences helping them to eliminate leukaemia cells and could fundamentally change existing approaches to leukaemia diagnostics and anti-leukaemia therapy (and possibly the treatment of other cancers).