Proteins are the nanoscale ‘machines’ that control almost all processes in cells, and revealing their structures is paramount to understanding how they work. X-ray crystallography is a valuable tool for providing ‘snapshot’ images of working proteins at an atomic level; however, some proteins are very tricky to freeze at particular moments in time.
[NiFe] hydrogenase enzymes are proteins that allow microbes to survive using hydrogen gas as their only energy source. These enzymes have drawn much attention because of their potential applications in future green energy technologies, but to fully determine how they work, it is imperative to image them at specific stages of their reactions.
Fortunately, [NiFe] hydrogenases naturally contain markers that are easily studied using infrared light, which made them ideal subjects for the Infrared Microspectroscopy beamline (B22, MIRIAM). Crystal forms of the enzymes were analysed at B22 within a custom-built electrochemical cell which allowed their reactions to be slowed down. This setup provided the opportunity to study an otherwise extremely fast reaction in unprecedented detail.
The demonstration that hydrogenase protein crystals could be controlled using electrochemistry is an important finding as many other proteins can be studied in the same way, including proteins that convert carbon dioxide into useful chemicals. 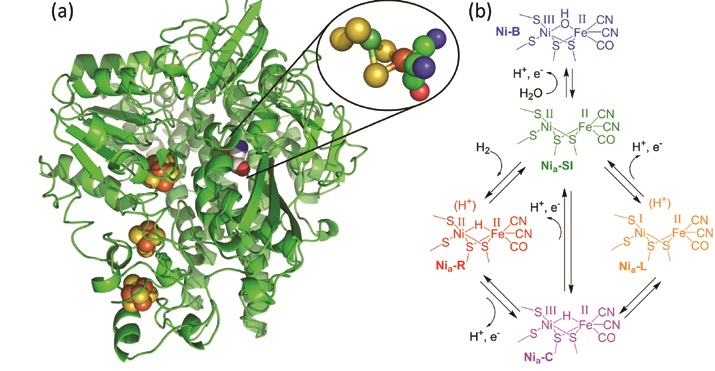 Figure 1: (a) Structure of the [NiFe] hydrogenase I from Escherichia coli in cartoon form, with the metal centres and their ligands shown as spheres in elemental colours (nickel: green, iron: orange, sulphur: yellow, carbon: grey, oxygen: red, nitrogen: blue); (b) Proposed catalytic cycle at the active site of [NiFe] hydrogenases.

Understanding the structures of individual proteins at the atomic level has been key in building up our understanding of how they contribute to the function of cells. In particular, X-ray crystallography has been extremely valuable in providing ‘snapshot’ images of many different proteins at the level of individual atoms. It is often difficult to trap proteins in specific states relevant to their function, however. This is particularly true for redox proteins, which catalyse chemical reactions involving the transfer of electrons, where crystallographic structures can represent structural averages from mixtures of states at similar redox levels. The benefits of using complementary spectroscopic techniques alongside protein crystallography, at the single crystal level, are becoming more widely acknowledged in order to gain a more complete understanding of biomolecular structure and function1. However, methods which offer direct control over the oxidation state of a redox protein crystal and simultaneous microspectroscopic measurement are lacking. It is timely that new tools are developed for studying redox proteins because they catalyse many chemical reactions which are relevant to solving big global challenges, including how to use hydrogen as a sustainable fuel, how to capture the greenhouse gas carbon dioxide and turn it into useful chemicals, and how to efficiently produce the fertilisers needed to sustain the world’s growing population.
Nickel-iron ([NiFe]) hydrogenases are an important class of redox proteins, which allow bacteria such as E. coli to live using hydrogen gas as their sole energy source. Hydrogenases are inspirational catalysts as they catalyse the reversible oxidation of H2 at active sites based around cheap, abundant metals, and at high turnover frequencies (>9,000 s-1). The active site of [NiFe] hydrogenases incorporates biologically unusual ligands, CO and CN-, bound to iron (Fig. 1a). Vibrational stretching bands of these ligands can be probed readily using infrared (IR) light, and the precise wavenumber positions of the bands (in particular of the CO chromophore) are diagnostic of specific redox states of the [NiFe] active site (Fig. 1b)2. Electrochemistry has proved critical to understanding the catalytic activity of [NiFe] hydrogenases and has been used in conjunction with spectroscopic methods to navigate between the equilibrium redox states of the active site, or to study the distribution of active site states during steady-state catalytic turnover3,4. Here, unprecedented electrochemical control over the redox state of single crystals of hydrogenase is combined with in situ synchrotron IR microspectroscopy to tease out chemical reactivity that is too fast to see in solution studies but is slowed in the crystal state. 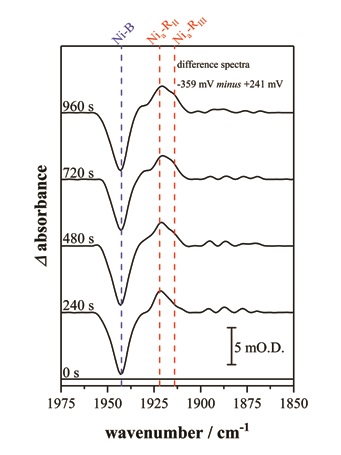 Figure 2: This sequence of infrared spectra highlight the time dependent formation of two of the Nia–R sub-states, Nia–RII and Nia–RIII in hydrogenase I from Escherichia coli. Spectra are presented as reduced minus oxidised baseline-corrected difference spectra following application of a reducing potential step from +241 to -359 mV (vs the standard hydrogen electrode, SHE)

This study exploited the synchrotron IR source of the Multimode IR Imaging and Microspectroscopy (MIRIAM) beamline, Diamond Light Source, to monitor the active site of [NiFe] hydrogenase 1 from E. coli in the crystalline state as a case study5. Hydrogenase 1 yields large well-diffracting crystals, with a typical cross-section of 50 × 50 μm2 and axial length of 1000 – 2000 μm. A custom-built reflection-absorption three-electrode electrochemical cell allowed precise potential control, with a cocktail of redox mediators in solution employed to facilitate electron transfer between the crystal and working electrode. Spectra recorded following alternating reductive and oxidative potential steps confirmed that electrochemical control of the hydrogenase 1 active site was fully reversible over multiple reduction-oxidation sequences. The brightness of the MIRIAM source enabled collection of high signal-to-noise spectra at discrete 15 × 15 μm2 sub-sections along the length of single hydrogenase 1 crystals, and electrochemical control was shown to extend over the whole crystal length. Spectral changes were complete within 30 minutes of application of a potential step.
The [NiFe] hydrogenase catalytic cycle (Fig. 1b) consists of both electrochemical steps and chemical steps involving proton transfer. The most reduced equilibrium state of the [NiFe] hydrogenase active site, Nia-R, actually consists of three sub-states at the same redox level. The precise nature of the Nia-R sub-states is unknown but they are thought to represent differently protonated forms of the [NiFe] active site, possibly indicative of discrete proton transfer events following initial activation of H22. In solution and steady-state turnover studies the different Nia-R sub-states states are observed at constant ratio, regardless of the potential, presumably interchanging on a timescale faster than the spectroscopic measurement. Interestingly in the crystalline state the interconversion of individual Nia-R sub-states can be temporally resolved, providing the first evidence that these sub-states might be sequential intermediates in the catalytic cycle (Fig. 2).
The results of this study have two important implications. Firstly, the ability to control, electrochemically, the redox state of a metalloprotein in a single protein crystal offers possibilities for obtaining ‘snapshots’ of complex redox proteins in well-defined states that have not been accessible previously. When combined with imaging of crystals using IR microspectroscopy, the state of the protein in the crystal can be checked before X-ray crystallography is used to obtain a structural ‘snapshot’, and afterwards to check whether there has been any damage to the crystal during the structural measurement. Secondly, our observation that chemistry is slowed down inside the hydrogenase crystal offers possibilities of trapping out specific states that react too fast to be detected in alternative solution studies. Thus, this body of work represents an important advance for understanding the interplay between structure and function in some of the complex metal-containing proteins that are critical to life.