Synchrotron light sources produce a strong and stable pulsed beam, for which the pulse sequence is dependent on the circumference of the storage ring. Many experiments only require some of the pulses, including ‘pump and probe’ experiments that activate a process and then measure it. Experiment hutches are equipped with pulse pickers that are used to select which pulses reach the sample. Currently, pulse pickers rely on mechanical systems rotating at high velocities, such as crystals or mirrors. They are limited by their rotation speed, and other design factors.

To overcome these limitations, a team of researchers has developed a new type of pulse picker, based on an active optic system that uses surface acoustic waves (SAW) rather than mechanical components. It provides a flexible method of selecting pulses, via electron modulation of the amplitude of the acoustic waves.

For their experiments they used B16, which is equipped with the special optics needed to focus the beam onto the detector. Having successfully demonstrated that this new type of pulse picker is feasible for pulses separated by at least 120 ns, the team has plans to install a second one at the BESSY II facility in Germany.

X-ray time-resolved experiments allow the investigation of the dynamics of chemical reactions or physical phenomena. Various pump-probe experiments can be conceived, and the studied processes span different time scales from picosecond to millisecond. In pump-probe experiments, a fast change in the sample is triggered by external activation (pumping). A short time after the activation, an X-ray pulse is used to measure the state of the studied sample (probe). Ideally, no additional X-ray pulses should reach the sample.

Synchrotron radiation facilities provide strong and stable X-ray beam pulses that can be used for time-resolved measurements. Since at synchrotron light sources many experiments are served simultaneously, a pulse picker is preferably implemented in each experimental station.

Modern pulse pickers are mechanical choppers rotating at high velocities. Depending on the design, mechanical bunch pickers can select X-ray pulses separated by at least several hundred nanoseconds. Another limitation common to most of the pulse pickers actually in use is the low repetition rate, in the kilohertz region. However, synchrotron sources commonly operate with a repetition rates in the megahertz region.

In 1984 Kikuta et al. foresaw the possibility of using the surface acoustic wave(SAW) tomanipulatean X-raybeam1and in 1997Tucoulou etal. presented a different kind of pulse picker based on X-ray diffraction from a multilayer modulated by SAW trains2. The SAW induces a sinusoidal deformation on the multilayer surface, which acts as a grating. When illuminated by X-rays it produces diffraction satellites3. The SAW propagates with a constant velocity, usually between 2000–5000 m/s 4. The time resolution is defined as the time that the SAW train needs to enter and leave the X-ray beam footprint. To be of practical value for Diamond, the time resolution has to be smaller than the 400 ns wide ion clearing gap 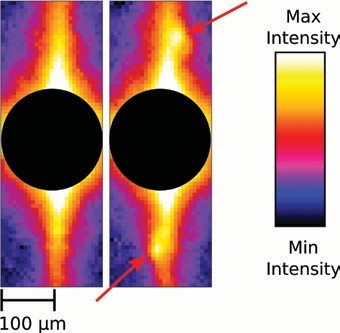 Figure 2: Experimental CCD camera images. The exposure time was 1 s. Surface plane is horizontal, scattering plane vertical. The saturating multilayer Bragg reflection in the middle was covered by a filled circle to avoid distraction from the important parts of the image. SAW is off (left). The two small peaks (arrows) are the m =1 diffraction satellites due to the scattering on the SAW grating (right). They are separated from the main peak horizontally, as well as vertically, which facilitates the detection. The colour scale was modified to emphasise the diffraction satellites.

In this highlight a feasibility test for an X-ray pulse picker built taking advantage of diffraction of a SAW in sagittal geometry is reported. In this geometry, the wavefront is parallel to the scattering plane5. This has the advantage of diminishing the time resolution to values that are at least one order of magnitude lower, compared to meridional geometry. The necessary time resolution to isolate the single bunch was achieved.

The substrate was a Y cut of Lithium Niobate (LiNbO3), a piezoelectric crystal. For our sample, the resonance frequency was 289 MHz, and the SAW wavelength was 12 μm. The propagation velocity was 3468 m∕s.

X-ray diffraction from a SAW-modulated Si/W multilayer was studied in a four-circle diffractometer at the B16 beamline at Diamond.The X-ray energy of 8 keV was selected by a double Si crystal monochromator. The beam was focused on the detector using 10 refractive Be lenses. The focal spot on the detector was 6 μm. A charge-coupled device (CCD) camera detector was used to measure the diffracted intensity. The SAW was excited using a high-frequency generator, and a wideband radio frequency amplifier with 5W power.The Bragg angle θ at the Si∕B4 C multilayer was 1.83, and the sample was tilted about the x axis by φ 70°. SAW trains were emitted with 100 ns duration, see Figure 1. The emission of the SAW was correlated with the Diamond storage ring in order to scatter the X-rays emitted from the selected electron bunch. The delay, and consequently the selected bunch, was controlled by a delay generator. 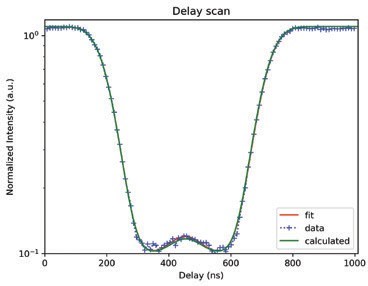 Figure 3: Measured data (blue), the Gaussian fit (red), and the calculated shape of the curve (green). The resolution of the measured curve is 10 ns.

In the CCD camera images (Fig. 2) the peaks are rather well separated, even though they are not entirely decoupled from the halo of the main beam. Calculated from experimental data, including the scattered intensity from the non-disturbed area, the rejection ratio is about 50%. However this does not reflect the real rejection ratio of a SAW pulse picker, which is proven in static experiments to be around 0.1% 4,5. To calculate the time resolution of the pulse picker, the integrated intensity from the satellites was correlated to the delay time. The integration area in the CCD image was automatically selected by a numerical algorithm. For a given delay between the storage ring signal and the SAW trigger, the SAW crosses the footprint of the X-ray beam in the moment when a specific bunch is being scattered. When the SAW train reaches the beam footprint and interacts with the multibunch, the intensity is maximal, normalised to 1 in the plot in Figure 3. The intensity decreases when the delay is such that the SAW train reaches the footprint during the ion gap, and it has a relative maximum in the middle of the gap due to the interaction with the single bunch. The time resolution corresponds to the full width at half- maximum of the peak at the single bunch position; in our experiment it was 117 ns.

Funding acknowledgement: This work was carried out with the support of Diamond Light Source.