Many types of single-celled microorganisms such as bacteria are covered with a protective outer layer of proteins known as the S-layer. The S-layer defends the cell from the external environment and acts as a supportive scaffold. In fact for some species, the S-layer is the only component of the cell wall so its strong structure is paramount for protection.
The S-layer proteins are repeating units that fit together like chain mail to form the essential armour for the cells. Although these proteins have been previously imaged, their high resolution details have so far eluded scientists.
Two of the Macromolecular Crystallography beamlines (I03 and I04) were used to solve the crystal structure of the S-layer protein, RsaA, in a bacterium called Caulobacter crescentus. The X-ray structure was then combined with an electron cryotomography (cryo-ET) map garnered from living cells to determine the exact pattern of S-layer proteins on the surface of the bacterium.
The innovative combination of crystallography and cryo-ET in this study showed how the RsaA proteins coated and protected the bacteria, and also highlighted the small pores within the arrangement. This study demonstrates the merit in combining two techniques to explore a structure in living cells. 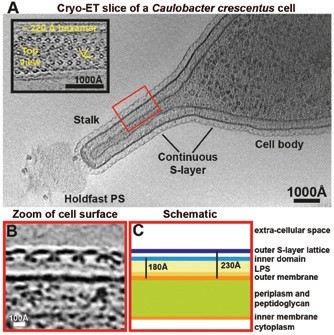 S-layer proteins (SLPs) are a diverse class of molecules found on many prokaryotes including Gram-positive and Gram-negative bacteria and the majority of archaea1. SLPs assemble to form planar sheets called S-layers on the surface of cells, where they are anchored, usually through non-covalent interactions with other surface molecules such as lipopolysaccharide 2. The propensity of SLPs to form sheets in solution and their absence from early model organisms such as Escherichia coli have hampered high-resolution structural biological analysis of this abundant and important class of molecules3. We turned to Caulobacter crescentus, a well-studied Gram-negative alphaproteobacterium with a characteristic ultrastructure. The cells are completely covered with an S-layer that is continuous between the cell body and the stalk (Fig. 1a). Cryo-ET imaging showed that the density corresponding to the S-layer of C. crescentus CB15 is almost perfectly hexameric (Fig 1a, inset) with a ~220 Å repeat distance. Two discrete densities were observed in the S-layer, the outer highly connected S-layer lattice and the discrete inner domains located around the centres of the hexamers (Fig. 1b-c).

We purified the sole component of the C. crescentus CB15N (NA1000) S-layer, the ~98 kDa RsaA protein (Fig. 2a) directly from cells using a previously described 4 S-layer extraction procedure that employs low pH. It was confirmed that the purified protein retained its characteristic polymerisation function by reconstituting S-layers in solution at physiological pH (Fig. 2b). Using the purified material, the crystals of RsaA with Ca2+ or Sr2+ were obtained and determined a 2.7 Å X-ray structure (Figure 2C-D) using single anomalous diffraction (SAD) data collected at Diamond. RsaA amino acid residues 249-1026 were resolved in the resulting electron density map.
RsaA249-1026 adopts a predominantly β-helical fold with ~30 right-handed turns (Figure 2C-D), forming an overall L-shape (Fig. 2c). In the crystals, the L-shaped monomers were arranged into hexamers that have a central pore with a size of ~20 Å (Fig. 2d). The N-termini of all six RsaA monomers point towards the central pore, while the C-termini are located on the outside of the hexamer. Although the space group of the crystal was P21, the unit cell is almost hexameric with an inter-hexameric spacing of ~215 Å. Intriguingly, this pseudo-hexameric repeat is close to the repeat observed in cellular S-layers in tomograms (Fig. 1). 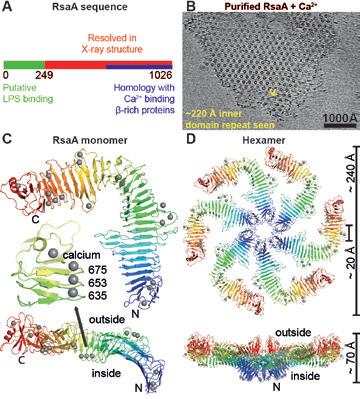 Figure 2: (a) Schematic diagram of the RsaA protein sequence. (b) On addition of Ca2+ ions
to RsaA, 2D sheets were obtained with the same appearance and repeat as S-layers on cells.
A cryo-ET slice through a reconstituted sheet. (c) One monomer of RsaA shown as a ribbon
diagram, coloured as a rainbow, N- to C-terminus from blue to red. Ca2+ ions are shown as
grey spheres. The inset shows a region around amino acid 653 where three tightly bound
structural Ca2+ ions stabilise the fold. (d) Non-crystallographic hexamer of RsaA resolved in
the X-ray structure, shown in two orthogonal orientations.

All residues in the RsaA X-ray structure were well ordered, reflecting a requirement that the S-layer lattice and the RsaA protein must avoid flexible loops, as they would be easy targets for extra-cellular proteases (Fig 2c). Amino acid side chains buried inside the β-helix domain of RsaA are either hydrophobic, or are negatively charged and co-ordinated tightly to structural Ca2+ ions (Fig. 2c-d, grey spheres), with very few exceptions. Some Ca2+ ions are in close proximity to the central pore of the hexamer (Fig. 2d), where they appear to stabilise the hexameric interface.

To relate the RsaA X-ray structure to actual S-layers found on the surface of cells, the structure of the C. crescentus S-layer using electron cryotomography (cryo-ET) of cells was resolved and subsequent sub-tomogram averaging also. The final refined 7.4 Å structure allowed us to locate different domains of the S-layer in the map and identify secondary structure elements (Fig. 3a). The outer S-layer lattice is highly inter-connected and consists mainly of β-sheets while the inner domain is discrete. 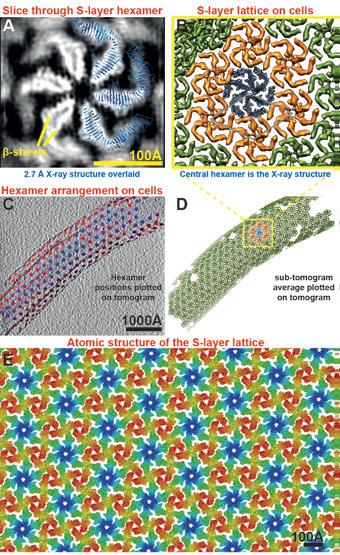 Figure 3: (a) A slice through the cryo-ET averaged density corresponding to the S-layer
lattice. Three of the fitted RsaA proteins from the X-ray hexamer are overlaid (blue). (b) The
S-layer lattice as seen on cell stalks. (c) Positions of all S-layer hexamers plotted on a cryo-ET
tomogram of a cell stalk. (d) The sub-tomogram averages plotted on the same tomogram. (e)
Atomic structure of the S-layer lattice from X-ray crystallography. The lattice seen in crystals
and on cells from two completely orthogonal methods was the same. Each RsaA protein is
coloured from blue to red from the N- to the C-terminus.

We then docked the hexamer from the RsaA249-1026 X-ray structure into the cryo-ET density map of the outer S-layer lattice as a rigid body. The docked atomic model shows that the lattices formed in the crystals through crystal packing and on cells are extremely similar and allows us to describe the arrangement of the S-layer lattice on cells at the atomic level (Fig. 3b-e). In the X-ray lattice, the hexameric interface contains amino acids bound to Ca2+ ions. We propose that Ca2+ ions bound near this interface are essential for the assembly of the RsaA hexamer. There is a strong dimeric interface and a less extensive trimeric contact is also observed in the lattice. Ca2+ ions are located near both the dimeric and trimeric interfaces in the lattice, possibly increasing the Ca2+ dependency of S-layer assembly.

The structures explain the modular architecture and function of RsaA, the permeability barrier and sieve function created by the S-layer and the strong Ca2+-dependence of RsaA polymerisation since Ca2+ ions are tightly co-ordinated within the RsaA fold or bound near the hexameric, trimeric, and dimeric interfaces.
Guided by the S-layer structure reported above, C. crescentus cells carrying mutated versions of the rsaA gene may be used for surface display of molecules for nanotechnological or antigen display applications and it will be possible to investigate S-layer biogenesis and its morphological changes during the cell’s life cycle at the molecular and atomic levels.
References:
Funding acknowledgement:
Part of this work was funded by the European Molecular Biology Organization (aALTF 778-2015 to TAMB), the Medical Research Council (U105184326 to JL), the Wellcome Trust (095514/Z/11/Z) to JL. This work has been supported by iNEXT, project number 1482, funded by the Horizon 2020 program of the European Union.
Corresponding authors: Dr Jan Löwe, MRC Laboratory of Molecular Biology, jyl@mrc-lmb.cam.ac.uk
Dr Tanmay Bharat, University of Oxford, tanmay.bharat@path.ox.ac.uk