Structural insights into the mechanism of bacterial ABC transporters

Bacteria utilise ATP-binding cassette (ABC) transporters to import nutrients and detoxify themselves. These transporters have been shown to exist in wide open conformations that permit the access of many substrates in the binding pocket. They alternate between an inward-open to an outward-open conformation much like a gate. One such ABC transporter, McjD, was previously characterised and it was found to adopt a novel conformation that was distinct from others of its class.
In this study, McjD was trapped in two different conformations to provide further insights into its mechanism of action. Two of Diamond’s Macromolecular Crystallography (MX) beamlines, I23 and I04-1, were used to solve the structure of it both in the absence of a substrate or ATP and with just ADP-vanadate, where I23 is the Long Wavelength MX beamline. Biochemical and biophysical measurements were also collected to complete the picture.

The structures showed that the transporter remained in an occluded conformation in the absence or presence of ATP/ADP. Additionally, the biochemical data showed that the transporter opened transiently to allow the release of its substrates from the binding pocket. This is the first time such a mechanism has been proposed for ABC transporters and it is thought to be the root of its substrate specificity. By understanding how McjD works, it might be possible to understand how other ABC transporters acquire multi-drug resistance in bacteria. 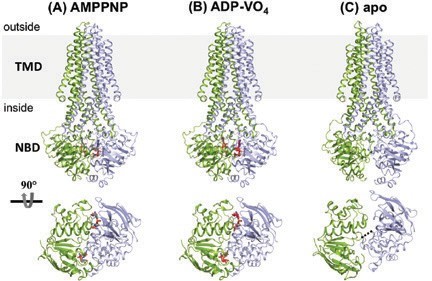 Bacteria, under nutrient starvation, produce and release antibacterial peptides, microcins, which can kill microcin-sensitive cells and therefore provide more nutrients for the surviving bacteria. These microcins are also toxic and lethal to the producing organism that utilise dedicated ATP-binding cassette (ABC) transporters (exporters) to provide them with self-immunity. ABC transporters are one of the largest superfamilies of membrane transporters and are found in both bacteria and eukaryotes. Many ABC exporters can confer multidrug resistance in bacteria and eukaryotic cells. ABC transporters require the binding and hydrolysis of ATP for energisation. ABC exporters exist either as homodimers or heterodimers; their core architecture is composed of a dimeric transmembrane domain (TMD) of twelve transmembrane (TM) helices, which forms the translocation pathway across the membrane bilayer and contains the ligand binding site, and a dimeric nucleotide binding domain (NBD) where ATP binds and is hydrolysed1. ABC exporters use the alternating access mechanism switching between inward- and outward-facing states, which exposes the ligand binding site alternatively to the inside or outside of the membrane, coupled to ATP binding and hydrolysis1.

Previously functionally characterised and the high-resolution structure of the antibacterial peptide McjD from E. coli 2 that exports the lasso peptide Microcin J25 (MccJ25) (Fig. 1) was determined. The previous structure of McjD was determined in a nucleotide-bound (in the form of adenosine 5′-(β,g-imido) triphosphate (AMPPNP), a non-hydrolysable ATP analogue) outward-occluded conformation (occluded at both sides of the membrane), representing an intermediate state between the outward- and the inward-facing conformations2. In order to understand the detailed mechanism of antibacterial peptide export by bacterial cells, it is important to trap the transporter in different conformations. In this study, the structure of McjD in a novel conformation, apo inward-occluded, and an additional nucleotide-bound state, high-energy outward-occluded intermediate with bound ATP-vanadate (ADP-VO4) was determined. 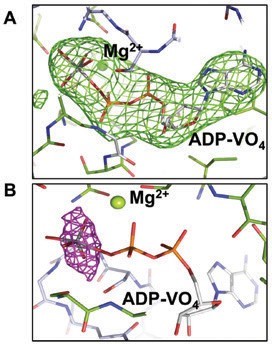 Figure 2: Electron density maps. (A) Clear |Fo|-|Fc| electron density map (green mesh
contoured at 3 s) could be observed around the ADV-VO4 molecule after molecular
replacement. ADV-VO4 is only shown for clarity but it was not included in the refinement. (B)
Anomalous difference electron density map (pink mesh) around the vanadate, from data
collected close to the vanadium edge, 2.26 Å. The map is contoured at 10σ. McjD and ADV-VO4
are shown as sticks. The magnesium ion is shown as green sphere. The ADV-VO4 carbons are
coloured grey, oxygens red, phosphate orange and vanadate dark grey.

The structure of McjD in the absence of nucleotides, apo form, 4.7 Å resolution (Diamond Light Source, beamline I04-1) (Fig. 1)3 was determined. In the absence of nucleotides, ABC transporters adopt an inward conformation with their TMDs separated and NBDs disengaged4 (Fig. 2b). Comparison between McjD-apo and other apo ABC exporters, such as MsbA4, revealed that its TMD is in an occluded conformation, similar to the McjD-AMPPNP structure, whereas the NBDs have disengaged in the absence of nucleotides. This conformation is called here apo inward-occluded. Inward-facing ABC exporters display domain intertwining of TMs 1-3 and 6 from one subunit and TMs 4-5 from the opposite subunit, which results in opening of the TMD to the cytoplasmic side of the inner membrane. In the inward-occluded McjD, TMs 3-5 from one subunit have moved towards the equivalent TMs of the opposite subunit, resulting in the loss of intertwining and occlusion of the cytoplasmic opening. In the absence of nucleotides, the NBDs of ABC exporters disengage4. The NBDs of the McjD-apo have separated by 7.9 Å relative to the McjD-AMPPNP structure, a distance much shorter compared to MsbA-apo with a distance of 35 Å4. The NBDs have moved in a 'scissors-like' motion.

Its structure in the presence of the transition state analogue ADP-VO4 (mimic of ATP hydrolysis) at 3.4 Å resolution (Diamond Light Source, beamline I23) (Fig. 1)3 was also determined. Clear electron density was observed for ADP-VO4 and Mg2+. Since the ADP-vanadate crystals were prepared by reacting ATP with vanadate and then setting up crystal trials, we wanted to confirm the presence of vanadate in the structure, especially of the medium resolution of the data. In order to verify the presence of vanadate, data were collected close to the vanadium K-edge, 2.26 Å wavelength using the long wavelength beamline I23. The anomalous difference electron density maps (Fig. 2) were calculated. At both NBDs, two strong electron density peaks of 14 and 20 σ, respectively, confirmed the presence of two VO4 groups. Due to the medium resolution of the data, the anomalous difference maps were used to place the VO4. McjD-ADP-VO4 is almost identical to the McjD-AMPPNP, as the two structures can be superimposed with a root-mean-square deviation (rmsd) of 0.7 Å over 560 Ca atoms. In contrast to the MsbA-ADP-VO4 structure that adopts an outward-open conformation as a result of domain intertwining4, the McjD-ADP-VO4 structure is outward-occluded without domain intertwining (Fig. 2a). We call it here high-energy intermediate outward-occluded. The TMD dimer interface in McjD-ADP-VO4 is formed between TM2 and TM5/TM6 from one subunit with the equivalent TMs from the opposite subunit similar to the McjD-AMPPNP structure. In the presence of ADP-VO4 the NBDs are dimerised. The McjD-ADP-VO4 structure represents the transition state of a water molecule making a nucleophilic attack on the γ-phosphate of ATP. 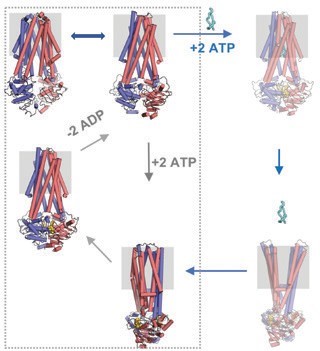 Figure 3: Mechanism of antibacterial peptide export by McjD. McjD is shown in red and blue
cartoons. The membrane is depicted in grey box. The nucleotides are shown as yellow spheres
and MccJ25 as cyan ribbon. The transient states are shown in light colour. The inward- and
outward-open conformations of McjD are based on MsbA and Sav1866 structures.