Glucagon-like peptide 1 (GLP-1) is an important hormone released from the gastrointestinal tract in response to food intake. Through its interaction with its binding partner, the glucagon-like peptide 1 receptor (GLP1R), GLP-1 promotes the release of insulin from the pancreas to regulate blood sugar. As a consequence, the stimulation of GLP1R is considered an attractive means of treating type 2 diabetes.
GLP-1 peptide analogues are effective in treating type 2 diabetes, but despite there being several medically approved variants on the market, they are expensive to produce and are administered by injection. Alternatives, such as small molecules or smaller peptides that could be taken orally would significantly simplify the treatment regimen for people with type 2 diabetes.
To design such small molecules, a detailed map of the interactions between GLP-1 and its receptor was needed. To obtain that information, the crystal structure of a truncated stabilised GLP-1 analogue bound to the receptor was solved using the Macromolecular Crystallography (MX) Microfocus beamline (I24). The structure revealed that the GLP-1 analogue adopted a very specific conformation and reached deep into the receptor’s binding pocket. It made numerous interactions with the receptor, the details of which enabled the design of a new GLP-1 analogues that were active in a mouse model of diabetes. These new smaller analogues could be the precursors of future diabetes treatments. 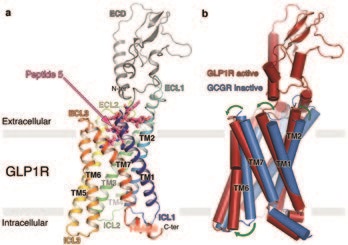 Figure 1: Structure of GLP1R in complex with Peptide 5 and conformational changes occurring
upon peptide binding; (a) ribbon representation of GLP1R (TMD rainbow coloured from N- to
C-terminus; ECD coloured grey), as viewed from a plane parallel to the membrane. Peptide 5 is
shown in stick representation with carbon, nitrogen and oxygen atoms coloured purple, blue
and red respectively; (b) superposition of Peptide 5-bound GLP1R (red) onto antagonist bound
GCGR (blue; PDB ID: 5EE7). Green arrows depict the changes in TM positions.

G protein-coupled receptors (GPCRs) are cell surface transmembrane receptors that transmit extracellular signals into intracellular signalling cascades. They are delicate molecular rheostats adopting multiple conformational states in response to specific hormonal and metabolic stimuli. One subfamily of GPCRs is the multi-domain class B secretin-like family, members of which are characterised by an extracellular domain (ECD) that binds peptide hormones juxtaposed to a transmembrane domain (TMD), and are validated drug targets for numerous diseases including osteoporosis, depression and anxiety and type 2 diabetes.

GPCRs’ inherent flexibility, which is integral to their function, is the cause of their extreme instability when they are extracted from their native cell membrane environment. To obtain an X-ray structure of GLP1R the receptor had to first be thermostabilised using a radiolabelled truncated and modified version of the GLP-1 agonist peptide. The final thermostabilised (StaR) GLP1R contains eleven thermostabilising amino-acid mutations, which facilitated expression and purification of the receptor and trapped it in an active conformation. Peptide 5 was designed in-house and despite being just a third of the size of native GLP-1, activates the receptor with comparable efficiency.

space. Peptide 5 is shown in stick representation with carbon, nitrogen and oxygen atoms
coloured purple, blue and red respectively. The N- and C-terminal extremities of Peptide 5 are
highlighted in white and the C-terminal unnatural residues are circled in red.

Co-crystals of GLP1R in complex with a high affinity truncated peptide agonist (Peptide 5) were grown using the vapour diffusion method. The 100 x 40 x 20 mm rod shape crystals were cryo-cooled in liquid nitrogen and mounted for data collection. Using the raster scanning capabilities at Diamond’s Microfocus Macromolecular Crystallography beamline (I24) together with an attenuated X-ray beam, the best diffracting parts in single crystals could be rapidly located without damaging them and then collected approximately 12° of diffraction images at each of these locations with higher transmission. The 96-well crystallisation plate mounting facilities at I24 were also used to diffract crystals in situ and so efficiently tested crystals grown in the presence of various additives in search of better diffraction. Due to the onset of radiation damage from the high intensity X-ray beam on the inherently fragile membrane protein crystals, data from eight crystals were merged together to obtain a complete dataset to 3.7 Å resolution. The structure was solved by molecular replacement using the glucagon receptor1 (PDB ID: 5EE7) and GLP1R ECD2 (PDB ID: 3IOL) as independent search models. GLP1R adopts an elongated conformation with the ECD extending away from the TMD (Fig. 1a). The TMD exhibits the canonical seven transmembrane helices (TM1-TM7) in a similar arrangement to previously published structures of class B GPCRs1,3 (Fig. 1 and Fig. 2). All intra- and extracellular loops (ICLs and ECLs) were resolved in the electron density map and could therefore be modelled. ECL1 adopts an alpha helical conformation and ECL2 is tethered to TM3 through a disulphide bond. Additional electron density for an α-helix was observed in the intra-helical cavity of GLP1R and Peptide 5 was modelled into it with its N-terminus buried in the TMD and its C-terminus directed towards the ECD (Fig. 2 and Fig. 3).
The structure reveals which residues in GLP1R are key in Peptide 5 binding and agrees with a wealth of previously published mutagenesis data characterising the binding of GLP-1 to GLP1R4. The interaction surface between Peptide 5 and GLP1-R is extensive with the N-terminal natural and unnatural residues of Peptide 5 interacting mainly with residues in TMs 1, 2, 3 and 7 and the C-terminal unnatural residues lying in hydrophobic pockets formed between TM1 and TM2 and ECL1 and the ECD (Fig. 2). Despite being shorter than GLP-1 and interacting less extensively with the ECD, Peptide 5 still binds with very high affinity to GLP1R. The reason for retaining such high binding affinity is likely due to the hydrophobic interactions involving the C-terminus of the peptide. These Peptide 5-specific interactions are also responsible for orienting the ECD differently than when bound to GLP-14 (Fig. 2).
Comparison of the Peptide 5-bound GLP1R structure to that of another class B GPCR, GCGR, bound to an antagonist molecule (Fig. 1b; PDB ID: 5EE7) reveals changes in the positions of the extracellular portions of TM1, TM2, TM3 and TM7 and the entirety of TM6 which swings away from the central axis of the TMD. Similar changes have been observed when comparing agonist- (active) and antagonist- (inactive) bound structures of class A GPCRs suggesting that the Peptide 5-bound GLP1R structure is more akin to an active conformation. This observation also indicates a common activation mechanism across class A and B GPCRs where specific and concerted movements of TMs lead to a substantial repositioning of TM6 and the consequent opening up of the intra-cellular surface of the receptor permitting docking of the G-protein trimer. 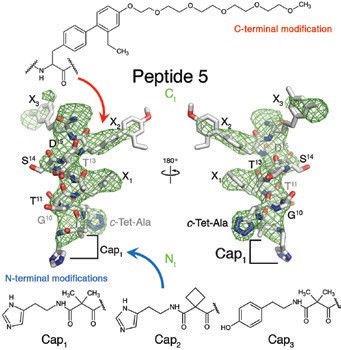 Figure 3: Details of Peptide 5 and its modifications. Peptide 5 is shown in stick representation
with carbon, nitrogen and oxygen atoms coloured white, blue and red respectively. FoFc omit
electron density map of Peptide 5 contoured at 2.5σ (green mesh). The N- and C-terminal
structure-guided modifications are shown in two dimensional chemical representations and
their positions highlighted by blue and red arrows respectively.

Diabetes and obesity are serious public health concerns which put great pressure on healthcare systems across the globe. Developing effective and affordable drugs to treat these conditions remains a pressing need. With the GLP1R structure in hand, the perceived historical lack of success in developing small molecules that adequately target and activate GLP1R can now be explained by the extent and complexity of interactions between hormone and receptor (Fig. 2). Guided by the structure, we have rationally designed a series of truncated peptide agonists (Fig. 3) with improved pharmacokinetic properties and important insulinotropic activity, as demonstrated through in vivo diabetic mouse models. Reducing the size of these peptides drops the manufacturing costs, making them more affordable and easier to administer. Increasing their half-life and bioavailability prolongs their activity and consequently reduces the frequency with which they need to be delivered. To conclude, this landmark structure not only aided the development of new peptide agonists against GLP1R but also concomitantly increased our understanding of the general mechanism of activation of the class B secretin group of GPCRs which includes many other important drug targets.