Chemistry drastically changes at very high pressures, allowing exotic types of chemical interactions leading to the formation of novel materials. For mixtures of iron (Fe) with a significant amount of nitrogen (N), theoretical calculations suggested that new Fe-N compounds could be synthesised at high pressures, and are expected to have enhanced properties such as increased hardness, superconductivity, or the ability to act as a catalyst.

A team of researchers used I15 to carry out this research, because this beamline provides an intense and highly focalised X-ray diffraction beam that allows investigations into the atomic structure of the compounds produced. A new laser-heating setup on I15 allowed the experiment to reach temperatures of up to 1700°C and pressures of 128 GPa - more than a million times the atmospheric pressure - by employing a laser-heated diamond anvil cell.

Over the course of their experiments, the scientists saw the development of three compounds, ZnS-type FeN, Fe2N and NiAs-type FeN, which they were able to characterise using X-ray powder diffraction. Above 17.7GPa, the FeN compound adopting a NiAs-type structure was formed, remained stable as the pressure was reduced, and could be removed for analysis of its physical and mechanical properties. However, they did not observe the iron pernitride FeN2 that was predicted by the theoretical calculations. Their results will help to increase the accuracy of the theoretical calculations, and will lead to new insights into the intriguing chemistry of Fe-N compounds at high pressures.

Figure 1: (a) Microphotograph of an iron flake inside the DAC experimental cavity at a pressure of 9.1 GPa. The sample is placed on c-BN micrograins and completely embedded in pure molecular
nitrogen; (b) Rietveld refinement of a diffractogram obtained from a FeN sample at 1.7 GPa, decompressed from 25.3 GPa. The observed diffraction lines can be assigned to FeN in the NiAs-type of
structure (orange) and KCl (blue). (Inset) A two-dimensional diffraction data image at 4.7 GPa showing several diffraction rings. (c) Arrangement of Fe and N atoms in the hexagonal (P63/mmc)
structure of FeN. The blue and orange spheres represent nitrogen and iron atoms, respectively.

The membrane diamond anvil cell (DAC) allows the generation of extreme pressures by squeezing a small sample in between two diamond anvils. The synthesis of new compounds in this hand-sized device can be noticed and characterised using synchrotron X-ray diffraction. Indeed, the interaction of energetic X-rays with a periodic atomic arrangement, such as crystals, produces an interference pattern (diffraction pattern) from which the periodic atomic lattice, the atoms’ position and the solid’s stoichiometry can be precisely determined. To help cross energy barriers impeding a possible chemical reaction towards the most stable compound at a given pressure, heating the sample up to 2000 K is vital and is achieved by focusing two high power infrared lasers on the sample. This complex, double-sided laser-heating setup was recently put in place on Diamond’s I15 beamline. The Psiché beamline of the SOLEIL synchrotron, equipped with a similar setup, was also used for this project. For the experiments performed at both beamlines, a thin, micrometersized iron flake was loaded in the DAC and entirely embedded in a much greater quantity of nitrogen. Iron can chemically react with the diamond of the anvils at high pressure and temperature, forming parasitic carbon compounds known to hinder further chemical reactions between iron and nitrogen. To avoid this, the iron was not directly positioned on the diamond anvil but instead placed on top of c-BN micrograins or a thin layer of KCl, which are both known to be chemically inert. A microphotograph of a Fe-N sample is shown in Figure 1. The loaded sample was then brought to the beamline where the formation of a new iron-nitrogen compound under extreme pressure-temperature conditions was investigated by performing powder X-ray diffraction.

Below 12 GPa, laser-heating of the samples resulted in the synthesis of the previously discovered Fe2N compound1. However, upon reaching pressures above 17 GPa and after further laser-heating, new diffraction lines that did not match any previously known Fe-N, pure Fe or N structures, were noticed. The new crystal’s lattice was determined to be hexagonal and, based on the absence of specific diffraction lines, belonging to the space group P63/mmc. An identical amount of nitrogen and iron atoms were found to compose the new solid, thus yielding a stoichiometry of FeN, and they were determined to adopt the common NiAs-type atomic arrangement, found in the well-known NiAs solid. The structural determination was achieved by a Rietveld refinement. FeN in its NiAs-type structure along with a Rietveld refinement are also shown in Figure 1. These findings are in agreement with similar studies reported in the literature2,3. 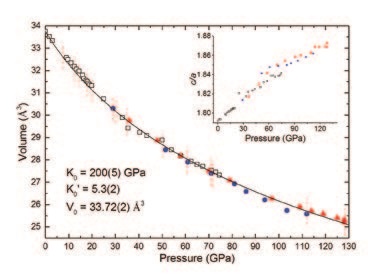 Figure 2: Unit cell volume of hexagonal FeN as function of pressure and at ambient
temperature. The solid line represents a fit of a third order Birch-Murnaghan equation of state
to the data. The vertical red lines mark the pressures where the sample was laser-heated.
The various symbols represent different experimental runs, with the full and empty symbols
indicating data obtained at the Diamond Light Source I15 beamline and the Soleil synchrotron
Psiché beamline, respectively. (Inset) The evolution of the c/a ratio of the hexagonal FeN
indicates that the c-axis is less compressible than the a-axis.

The FeN compound was characterised by powder X-ray diffraction up to 128 GPa with frequent laser-heating but no further chemical or structural transformations were observed. The evolution of the FeN compound’s unit cell lattice parameters and volume with respect to pressure is shown in Figure 2. Based on these measurements, valuable information regarding the compound’s equation of state, its compressibility as well as the evolution of the chemical interactions between the Fe and N atoms could be inferred. By fitting a third order Birch-Murnaghan equation of state to the pressure-volume data, a bulk modulus of K0 = 200(5) GPa with a pressure derivative K0’ = 5.3(2) were obtained for a fixed, measured volume of V0 = 33.72(2) Å3 at ambient pressure. The bulk modulus of FeN in its high pressure structure is slightly higher than what was found in nitrogen-poor iron nitrides, which agrees with the trend that the addition of nitrogen atoms strengthens the crystalline structure by increasing the crystal’s overall covalent interactions1.

As shown in Figure 2, the c/a ratio progressively increases with pressure, indicating that the a-axis is more compressible than the c-axis. The anisotropic behavior of the lattice parameters has consequences regarding the interatomic distances within the crystal. As shown in Figure 3, the interatomic distance of the six second-nearest Fe neighbors surrounding a given Fe atom is more compressible than the shortest Fe-Fe and Fe-N distances. Based on previous studies of compounds with the NiAs-type structure, this particular change of interatomic distances is indicative of a weakening of the solid’s ionicity, i.e. a lower charge transfer from the metallic Fe atoms to the nitrogen atoms4. 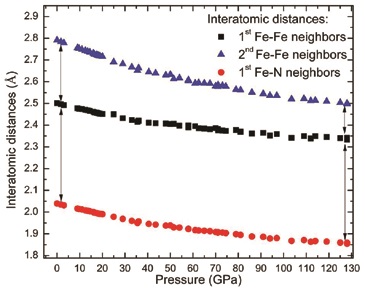 The FeN compound in its NiAs-type of structure proved to be retrievable down to ambient conditions after the complete release of pressure. However, a partial structural phase transition of FeN in its NiAs-type of structure into FeN in a ZnS-type of structure was detected, with the latter being a phase previously produced exclusively in thin films. Interestingly, neither of those two phases are thermodynamically favored below 10 GPa, where the Fe2N compound, although of different stoichiometry, is energetically favored. This result underlines the large activation barriers impeding chemical reactions necessary for a change in stoichiometry (FeN → Fe2N) as opposed to an effortless structural transition (NiAs-FeN → ZnS-FeN). With this conclusion in mind, the laser-heating of the NiAs-type FeN compound to higher temperatures could very well result in the synthesis of yet another nitrogenrich Fe-N solid, such as the theoretically predicted iron pernitride FeN2.5

Funding acknowledgement:
The authors gratefully acknowledge the Centre National d’Etudes Spatiales (CNES) and the Natural Sciences and Engineering Research Council of Canada (NSERC) for financially supporting the Ph.D. of D.L.