The hunt for viable green alternatives to traditional petrol and diesel engines has led a move towards natural gas engines, which produce less carbon dioxide emissions.

But natural gas engines pose other problems due to unburnt methane (a potent greenhouse gas) in the exhaust feed. So scientists at Diamond, Johnson Matthey – a global leader in sustainable technologies - and the University of Reading, have been researching ways to improve catalysts to convert residual methane into more environmentally friendly products.

Both palladium (Pd) and platinum (Pt) have been used as catalysts for complete or partial methane oxidation – a critical reaction step in converting methane into more environmentally friendly products. Pd has been shown to be the most effective, with the best performance when the Pd is in an oxidised state, for example in palladium oxide. However, water is produced in the oxidation reaction of methane and this worsens the performance of the palladium oxide catalyst. Pd is also more expensive than Pt, and so is less economical for large scale catalyst production.

Scientists were keen to understand the effect of adding Pt to Pd-based catalysts and explore if bimetallic catalysts (catalysts with two different metals) show better catalytic activity during methane oxidation in dry and wet conditions.

A team from Johnson Matthey and the University of Reading used advanced characterisation techniques to study the reactions taking place at the atomic level under real operating conditions. They performed in situ near-ambient pressure X-ray photoelectron spectroscopy (NAP-XPS) studies, using Diamond’s beamline B07-C VerSoX at Diamond, on a series of palladium and platinum on alumina (PdPt/Al203) catalysts with different ratios of Pt to Pd. This technique enabled them to identify the elements present on the surface of the material and their chemical state under reaction conditions. They observed significant changes in the oxidation state of Pd depending on the reaction conditions and the concentration of Pt.

The research showed that wetter conditions led to a smaller degree of Pd oxidation at all temperatures studied. Pd catalysts doped with 1 wt% Pt were the most active at a lower temperature range, under both dry and wet conditions. However, in very oxygen-rich reaction mixtures there was less of a clear benefit to adding Pt.

This research will feed into the future development of green alternatives to diesel and gasoline engines. Bimetallic catalysts have the potential to reduce the cost of natural gas engines, while maintaining performance, ultimately enabling the more widespread of natural gas engines and the reduction of transport emissions.

“Studying the surface chemistry of the catalysts in catalysis - under a gas environment and at elevated temperatures - is crucial to reveal more information on how the catalysts work. NAP-XPS allows us to create a full surface profile of a catalyst during a reaction, providing oxidation states of the metals, their surface concentrations on the support, which surface species are formed and how they change at different reaction conditions.” 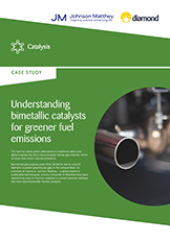