The environmental impact of the Mount Polley mine disaster

The effects of mine tailings dam failures on local ecosystems

On 4th August 2014, the Mount Polley mine tailings dam failed, resulting in 25 million m3 of material discharged into the surrounding area, the second-largest failure by volume on record.

Mine tailings dam failures of this kind can rapidly add large volumes of vanadium (V)-bearing solid and liquid waste to the fluvial environment, with both short and long-term effects on the local ecosystems.

Vanadium occurs naturally in four oxidation states; V2+, V3+, V4+ and V5+.
A high intake of vanadium can be carcinogenic and toxic, with V5+ considered to be the most toxic of all the species.

The geochemical behaviour of these substances in mining-affected environments is not well understood. Scientists were therefore keen to conduct element-specific studies on samples around the site to understand the fate of potentially toxic V species in the discharge.

A team of scientists from universities in the UK and Canada performed X‑ray absorption spectroscopy (XAS) experiments using beamline I18 on aqueous and solid-phase samples collected in August 2015 at a range of locations across the affected area.

The ∼pH neutral environment of Hazeltine Creek means that elevated
vanadium concentrations are likely to be naturally attenuated by the formation of V5+ bearing secondary Fe oxyhydroxide, Al(OH)3 or clay minerals suggesting the vanadium is not bioavailable.

Using I18, the scientists were able to determine the elemental distribution within the sample. They were able to use XANES technique to provide rapid, high-resolution data.

The data obtained from XAS measurements can be used to support modelling of the chemical environment following the Mount Polley tailings dam failure. Modelling suggests that stream waters contain mostly V5+ and inflow and pore waters contain a mixture of V3+ and V5+.

“I was part of a NERC-funded multi-disciplinary team that determined the impacts of the Mount Polley tailings dam failure, one of the largest on record. Our Diamond beamtime gave us vital information about the forms of potentially toxic vanadium in the tailings and secondary minerals. This enabled us to develop a model demonstrating natural attenuation of vanadium in river systems affected by the failure.” 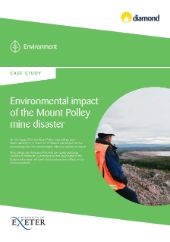