The impact of biostimulants on the growth of selenium-enriched wheat

The essential trace mineral, selenium, is of fundamental importance to human health. It plays an important role in many biological processes such as guarding against oxidants, the formation of thyroid hormones, DNA synthesis, fertility and reproduction.

At present, insufficient levels of Se in the diet affects up to 14% of the population worldwide, bringing with it the associated risk of developing chronic degenerative diseases.

Plants can transform naturally occurring inorganic Se species (present in soil) into organic Se species – the desired form of selenium in the human diet. Effectively, the Se level in soil usually has a direct influence on the concentration of Se present in food and subsequently in the human body. However, high Se concentration in soil induces stress in the plant and may hamper its normal development.

As with other nourishing minerals, food bio-fortified with selenium is becoming increasingly common; however, introducing additional Se into the plant can induce toxicity. To solve this issue, plant biostimulants have been used to enhance nutritional efficiency, and address abiotic stress tolerance and crop quality.

Using a plant biostimulant we can significantly reduce the stress applied to the plants. It was therefore critical to understand the effect that the biostimulant has on Se-induced toxicity at different growing stages, to determine the optimal conditions when Se should be added as a supplement.

Researchers from the Universitat Autònoma de Barcelona used I18 at Diamond to study the spatial distribution of Se, as well as Zn, Cu, Fe, K and Mn used in plant metabolism and to determine the chemical state of Se at different growing stages.

Combined microfocus X-ray fluroescence (µ-XRF) and microfocus X-ray absorption near edge structure (µ-XANES) measurements on grain sections showed that during both growing stages (tillering and heading) the organic Se species found in wheat grain were co-located with minerals in the outer layer and embryo parts of the grain. These parts of the grain contain a higher concentration of proteins. The proportion of organic Se species was at its highest at the tillering stage (>90%), whereas during the heading stage, the Se content was reduced to around 80%

This research showed that the chosen biostimulant played a key role in the enhancement of wheat grains and their dry biomass without hindering the Se enrichment process. This knowledge is crucial to reduce both plant toxicity and the cost of producing plants with a healthy amount of selenium.

“The outstanding capabilities of I18 beamline at Diamond Light Source and the great support provided by their staff have allowed us to get the best possible results during our experiment. Now we have a better understanding of how to perform a more effective and plant healthy Se supplementation and overcome the toxic effects using plant biostimulants.”
Dr Mercè Llugany, Universitat Autònoma de Barcelona 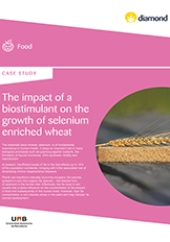