Over recent years we have seen a global move towards renewable energy not only to support increased demand for energy but also to reduce the production of carbon dioxide, a common pollutant from burning fossil fuels. Engineers and scientists are continually looking at ways to store this energy during periods of low user consumption (day-time) and to maximise its usage during periods of high demand (evening-time).

In practice, converting carbon dioxide directly, efficiently and selectively to chemicals and fuels is one of the biggest challenges of modern chemistry, however, a recent collaboration at Diamond led by Rosa Arrigo investigates an innovative way to store energy in chemical energy vectors (to produce valuable chemicals and fuels), whilst also using CO2. In this particular study, the team has developed materials active in the synthesis of acetic acid, commonly used in adhesives and sealants, dyes and herbicides and formic acid used in food preservatives and as an antibacterial agent.

The study uses Fe-based catalysts dispersed onto two chemically different supports: O and N-doped graphite, to determine the influence of the carbon surface chemistry on the structural and catalytic properties of these materials in the CO2 reduction reaction. The catalysts were tested under different potential conditions in a low concentration bicarbonate solution, by means of electrochemical techniques, to identify conditions for maximal efficiency as well as changes in selectivity.

By using Fe K-edge X-ray absorption spectroscopy and gas-chromatography, the scientists were able to study the catalysts in situ during CO2 reduction and Hydrogen Evolution Reaction (HER), and thus to correlate the structural changes and the products formed.

The results of the study showed that N-dopants in graphite stabilise Fe(II) species, thus hindering their further reduction to metallic Fe at potentials relevant to acetic acid production. In contrast, Fe supported on O-doped graphite was less favourable for CO2 production, but did produce H2 in the entire range of potentials investigated. A correlation between the production of H2 from water electrolysis and the reduction of initial Fe(III) to a metallic state was observed. Despite its poor performance in the CO2 reduction reaction, this catalyst presented itself as a good candidate for substituting precious metals for HER.

The results of this research provide a better understanding of catalytic processes at a molecular level. It paves the way for developing novel energy materials with greater impact. By using CO2 as a raw material we not only reduce our carbon footprint, but also produce the chemicals we need in a more environmentally-friendly way, recycling carbon dioxide and powering the chemical reactions with renewable energy.

For more information on this study, read our article.

"For a step change towards innovation and the implementation of new energy and chemical technologies, we need to be able to control the underlying chemical process. The unique facilities at Diamond Light Source enable us to observe and understand the chemical reaction as it occurs in a ‘real’ and complex environment, and across different conditions, to improve the performance of our catalysts." 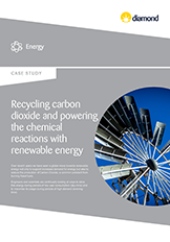