Malaria is one of the most prevalent parasitic diseases of humans and affects 216 million people worldwide. Many years of research have been dedicated to finding the most effective and affordable drugs to prevent infection, which have to date been very successful.  Most recently the challenge has been the growth in resistance to existing treatments, which has driven further research into a new generation of anti-malarial drugs. 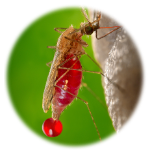 Malaria is caused by species of Plasmodium, which are parasitic microorganisms that are transmitted by mosquitoes. As part of their life cycle, the parasites multiply within red blood cells inside a protective vacuole. In order to infect new host cells, the parasitic offspring must escape from the red blood cells by breaking through the membrane surrounding the vacuole as well as the red blood cell membrane, in a process known as egress. The exact mechanism of egress is poorly understood at present, so experiments were undertaken at Diamond to shed light on the events that unfold during this critical late stage of infection.

Working with a number of partner organisations - Birkbeck, University of London, Francis Crick Institute, Centre for Ultrastructural Imaging and King's College London - Diamond's expert scientists used mapping techniques, including cryo soft x-ray tomography, to visualise red blood cells infected with a species of Plasmodium. Key stages of egress were halted with the aid of selective inhibitors to allow the intermediate stages of the process to be observed. The team used a combination of electron tomography to image thin sections of the infected red blood cells, and soft x-ray tomography to look at frozen, hydrated intact cells.  The study revealed that egress began at an earlier point than previously reported, implying that an as-yet unidentified event triggers the process. 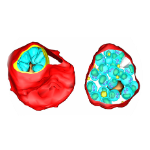 Understanding the exact events during this critical phase of infection could enable new medicines to be developed – to interfere with the parasite’s life cycle and prevent malaria infections in the future. This work lays the foundation for further research, assisted by genome editing CRISPR/Cas9 technology, to genetically alter the main players of egress and fully characterise this process.

"Using Diamond’s B24 beamline we were able to observe the intermediate stages of egress to help understand the process. Cryo soft x-ray tomography allowed us to look at intact, frozen-hydrated cells, so that we could see the whole infected blood cell enclosing the parasites, along with all the major membranes."