The thyroid is a gland located in our neck which produces iodinated hormones essential for metabolism and growth, namely thyroid hormones (TH).

An imbalance in thyroid hormone production may lead to a range of disorders including cardiovascular, foetal development, and psychiatric problems, which affect more than 5% of the population worldwide, with increasing incidence. Most commonly, people suffer from an under-active thyroid (hypothyroidism) or less frequently, an over-active thyroid (hyperthyroidism). These conditions are often related to thyroid auto-immunity and cancer. 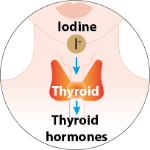 The molecular mechanism through which the thyroid produces hormones is not well understood. The synthesis occurs from a precursor protein, thyroglobulin (TG), which accounts for half of the weight of the gland. TG contains tyrosine amino-acidic residues which bind iodide absorbed from blood, leading to the formation of the two TH: tetra-iodothyronine (thyroxine, T4) and tri-iodothyronine (T3).

TG is a large dimeric glycoprotein (2x 300 kDa) containing 66 tyrosines/monomer, of which about 30 bind iodine but only a small portion is able to generate TH. For years, without a three-dimensional structure of TG it has been impossible to identify the active tyrosines and to understand their mechanisms of hormone synthesis. While TG crystallisation has been challenging due to its heterogeneity, the recent development of cryo-electron microscopy (cryo-EM) has offered the opportunity of capturing this biologically fundamental complex for the first time. 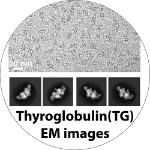 The resulting atomic model allowed them to identify putative tyrosines involved in hormone synthesis. The mutation of these tyrosines in phenylanines (which cannot be iodinated) completely suppressed the hormone synthesis in TG, thereby unambiguously confirming their position. Interestingly, the key tyrosines are not in geometrically structured active sites, but in rather flexible regions. We engineered flexible tyrosines in a completely unrelated bacterial protein, the Maltose Binding Protein, and successfully manage to reproduce T4 synthesis in vitro. This experiment potentially paves a new route for the production of thyroid hormones in cells.

This study provides an unprecedented and crucial structural insight into the thyroid hormone synthesis in the thyroid gland by their precursor TG. This knowledge is particularly important to understand how hormone production can be tuned at a molecular level in patients with hyper- or hypo-thyroidism.

“The first high resolution large dataset of TG from human thyroid was collected at eBIC and led to the first exciting cryo-EM map of the protein. The quality of the Diamond cryo-EM facility and scientific staff was key to boost our discovery on thyroid hormone synthesis.”