The process of electrospinning has been around for many years. It was originally used for the development of textiles; however in the last 5-10 years, this method has been used for more innovative applications.

Electrospinning uses electric forces to draw charged threads of polymer solutions or polymer melts to create fibres with diameters of a few micrometres. It enables the generation of constructs with large surface areas and a fibrous morphology that closely resemble the macromolecular structure of many tissue matrices; it therefore provides a good structure for cell attachment, tissue regeneration, and even drug delivery.

To enable its use in these challenging applications scientists need to fully understand the failure mechanisms of electrospun fibres and shed light on the structure-property relationship of the materials.

A team from the University of Manchester, Nagoya Institute of Technology, Thermo Fisher Scientific and the Research Complex at Harwell used Diamond to look at the tensile deformation (changes when the fibres are pulled) of a biodegradable polyester P(3HB-co-4HB).

Using the Diamond Manchester Imaging Branchline, I13-2, radiographs of the deformation and failure of the fibre mats were captured. Tomography was performed post-tensile deformation to various strains on different samples and the spatial distribution of thick segments quantified. From the study, scientists could see that fibres reorient significantly in the direction of the applied strain followed by significant fibre thinning by means of localised necking and neck growth.

Once strained, the fibres thin without a gradual reduction in fibre diameter, leading to a distinct bimodal distribution of fibre diameters. The study also highlights the bonded regions/contact points between fibres which remained thick (largely unstrained) right up until failure, suggesting that the fibres were strongly coupled to each other. 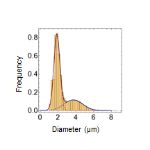 Using synchrotron techniques, scientists could simultaneously capture not only the deformation of individual fibres, but the entire fibre network.

By fully understanding these failure mechanisms, they can help to build materials that have large elongation before failure and can therefore be used by the biomedical community for applications in regenerative medicine such as degradable implants and sutures.

To find out more, read our article.