Evaluating the long-term risk from radioactive particles at Fukushima

In March 2011 a major earthquake hit Japan’s East coast.  Although the six nuclear reactors at the Fukushima Daiichi Nuclear Power Plant (FDNPP) were robust enough to survive the seismic effects, the subsequent 15 metre tsunami had devastating effects, causing a power failure and loss of core cooling. Rising heat within the reactor cores caused the fuel rods to overheat and partially melt down, and radioactive material was released into the surrounding area.

In partnership with the Japan Atomic Energy Agency (JAEA), a research team led by Professor Tom Scott from the University of Bristol has been examining samples collected, with the help of drones, close to the site, within the restricted zone. The team was keen to understand the physical and chemical nature of the radioactive particles and determine their long-term environmental fate and the risks they pose.

The scientists performed the first experiment of its kind to study a small radioactive particle (450 x 280 x 250 μm) from the Fukushima fallout site. Using a unique combination of tomography and micro-fluorescence measurements from the I13-1 and I18 beamlines at Diamond, the team analysed its internal structure and 3D elemental distribution.

The composition and structure of the particle indicates that it was likely to have been formed predominantly from materials from the reactor building, mainly silicon-based fibrous insulation. Radiocaesium and other fission products were incorporated into the molten material, and fragments of the structural steel and concrete stuck to the surface after the hydrogen explosion.

The structures observed in the particle had a remarkable resemblance to a volcanic pumice, containing gas-filled bubbles. The pumice-like internal structure means that the particle is susceptible to weathering and fragmentation, which would increase the effective surface area and subsequent dispersal of iron-associated radiocaesium into the environment. Within the particle, radioactive material was shown to be encased in a glass-like silicon, analogous to the vitrification process used for nuclear waste disposal.

By using this combination of highly sensitive techniques, scientists were able to study the chemistry, structure and functionality of the sample at the nanoscale – all in parallel.  The group were able to gain a greater understanding of processes occurring during the accident. This approach could now be used for other incidents of a similar nature, and much wider. This combination of techniques will be used to examine larger particles closer to the site and help to evaluate the distribution of fuel debris to better define risk across the area.

“The analytical capabilities, techniques and equipment afforded by Diamond Light Source are unique and have enabled us to undertake crucial research into the Fukushima Daiichi Nuclear Power Plant accident that would not otherwise be possible. The results from Diamond have directly influenced decommissioning strategies on the accident site, resulting in significant cost and human dose reductions.”
Dr Peter Martin, South West Nuclear Hub 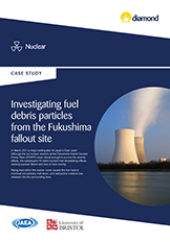