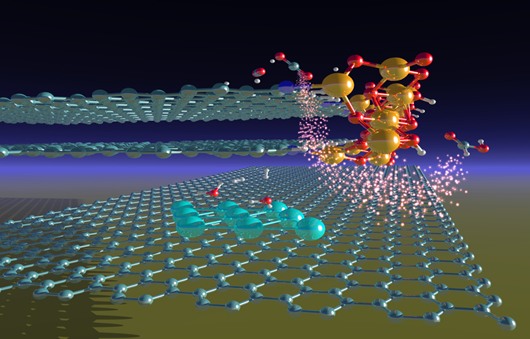 3D model showing the molecular structure of the iron supported on graphite catalyst used in this study. The Fe-O species (yellow-red atoms) of the ferrihydrite particles at the edges of the graphitic layers are found to be active in carbon dioxide electro-catalytic reduction, whereas the metallic Fe species (blue atoms) formed in situ produce molecular hydrogen from water. Image credit: Victor Posligua.

Over recent years we have seen a global move towards renewable energy not only to support increased demand for energy but also to reduce CO2 production from burning fossil fuels. Engineers and scientists are continually looking at ways to harness this energy, as we actually produce more renewable energy than we can store during periods of low user consumption (day-time) and not enough during period of high demand (evening-time). This calls for alternative solutions for storing excess renewable energy in the form of suitable chemical energy vectors.
The advantages of electrochemical energy conversion technologies can be two-fold  if chemical waste products, such as carbon dioxide, are used to fuel the chemical reactions. Carbon dioxide is not only a waste product from fossil fuel power plants but is a major threat to our ecosystem due to its polluting emissions – it therefore needs to be effectively controlled, and could be used to positive effect by adopting a circular economy model (where it can be recycled for more valuable use). However, in practice, converting carbon dioxide directly and selectively to the desired chemicals and fuels is one of the biggest challenges of modern chemistry.
A recent collaboration at Diamond Light Source led by Rosa Arrigo aims to address both of these issues by researching innovative ways to store energy in chemical energy vectors (to produce valuable chemicals and fuels), whilst also using CO2. In this particular study, the team has developed materials active in the synthesis of acetic acid, commonly used in adhesives and sealants, dyes and herbicides, and formic acid, a substance most notably used in food preservatives and as an antibacterial agent.
The collaborative study uses Fe-based catalysts dispersed onto two chemically different supports: O and N-doped graphite, to determine the influence of the carbon surface chemistry on the structural and catalytic properties of these materials in the CO2 reduction reaction. By using the facilities at Diamond (including ePSIC imaging centre), the team was able to look in detail at the Fe species active during carbon dioxide conversion, as well as the structural dynamics involved as the selectivity of these materials switches from the reduction of carbon dioxide to the evolution of hydrogen from water electrolysis.
Stage 1: Characterisation of the catalysts

By using the X-ray absorption spectroscopy (XAS) technique at the Core EXAFS beamline (B18) at Diamond, the team looked at the Fe K-edge, which is sensitive to the Fe oxidation state and its coordination geometry, discovering that the designed synthesis has led to a ferrihydrite-like structure which is a poorly ordered oxyhydroxide phase containing Fe(III). 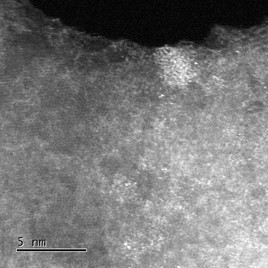 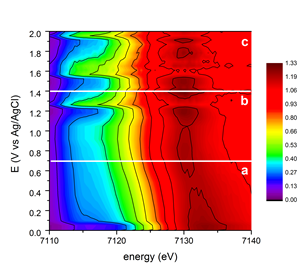 Left image: High angle annular dark field image for Fe on N-doped graphite where the bright spots
are the Fe atoms (image supplied by: Manfred E. Schuster).
Right image: Intensity map of the normalised Fe K XANES spectra versus the applied
electrochemical potentials.
High angle annular dark field scanning transmission electron microscopy was performed using Johnson Matthey’s electron microscope at ePSIC, to visualise the atoms and clusters of iron localised at the edge of the graphite structure where different forms of nitrogen and oxygen exist. A complementary technique, ambient pressure X-ray photoelectron spectroscopy,* was then used to look at the surface chemistry of the catalyst and identify the electronic structure of the lighter elements present in the catalysts such as N, C, O.
In this way, the team were able to look in detail at the local structure of the catalyst, assessing the Fe speciation in terms of electronic structure and morphology, discovering how the iron interacts with the surrounding atoms of the support.
Stage 2: Studying the catalyst electronic structure ‘in-situ’ during the electro-catalytic reaction 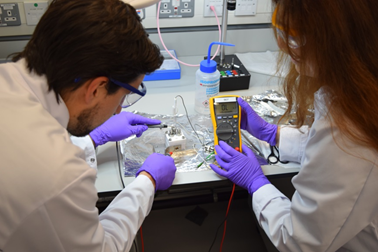 Diego Gianolio (left) and Rosa Arrigo (right) at work with the electrochemical cell for operando XAFS – designed at Diamond in collaboration with Jamie Grindrod, Stewart Scott and manufactured by Phil Robbins. The cell is a three electrode system with a gas inlet and outlet for downstream gas analysis via gas-chromatography and mass spectrometry
The catalysts used in this study, namely Fe on N-doped graphite and Fe on O-doped graphite, were tested under different potential conditions (-0.5, -1.0, -1.5V) in a low concentration bicarbonate solution by means of electrochemical techniques, to identify conditions for maximal efficiency as well as changes in selectivity. By using Fe K-edge X-ray Absorption Spectroscopy and gas-chromatography, the scientists were able to study the catalysts ‘in situ’ during CO2 reduction and Hydrogen Evolution Reaction (HER), and thus to correlate the structural changes and the products formed.
The results of the study showed that N-dopants in graphite stabilise Fe(II) species, thus hindering their further reduction to metallic Fe at potentials relevant to acetic acid production. It demonstrated more favourable conditions for electron transfer to chemisorbed carbon dioxide-related species, achieving their reduction with high efficiency under controlled potential below the onset potential for hydrogen evolution.
In contrast, Fe supported on O-doped graphite was less favourable for CO2 production, but did produce H2 in the entire range of potentials. A correlation between the production of H2 from water electrolysis and the reduction of initial Fe(III) to a metallic state was observed. Despite its poor performance in the CO2 reduction reaction, this catalyst presented itself as a good candidate for substituting precious metals for HER.
The results of this research provide a better understanding of catalytic processes at a molecular level. It paves the way for developing novel energy materials with greater impact, to maximise efficiency and provide long-term stability during catalytic processes, whilst also improving productivity and cost effectiveness. By using CO2 as a raw material we not only reduce our carbon footprint, but also produce the chemicals we need in a more environmentally-friendly way, recycling carbon dioxide and powering the chemical reactions with renewable energy.

In order to make a step change towards these new innovations and their implementation, we need to address some core challenges – amongst them, improving the stability of our catalysts. In this study, we demonstrate the importance of fully understanding what is happening at the atomic level, from the surface to the bulk, during these chemical reactions, and within ‘real’ and complex environments. Diamond’s unique facilities enable us to interrogate these materials using different techniques to get a very detailed understanding and improve the performance of our catalysts.

* This technique is now available at the B07-VERSOX beamline at Diamond Light Source.

To find out more about XAS and ePSIC, or to discuss potential industrial applications, please contact the Industrial Liaison team on 01235 778797 or send us an e-mail. You can keep in touch with the latest development by following us on Twitter @DiamondILO or LinkedIn.