Titanium dioxide is one of the most widely used metal oxides and in recent years it has attracted increasing attention in the form of thin films for applications in microelectronics. In particular, it has found potential application in resistive random access memory (RRAM) cells, where the titanium dioxide active layer is sandwiched between two metal electrodes in a metal-insulator-metal (MIM) device architecture. Because of their simple structure, RRAM cells, also known as memristors, can be incorporated into devices with high density that function at low power and high speed. The importance of RRAM devices is due to the fact that they exhibit resistive switching; i.e., they have the ability to toggle their corresponding resistance between high and low resistance states by application of an appropriate voltage. However, this resistive switching mechanism is not currently well understood and is still a matter of debate.

In order to shed light on the resistive switching mechanism, a deep investigation of the titanium dioxide film structure before and after application of a bias was necessary. X-ray diffraction (XRD) and Raman spectroscopy techniques have often been applied for the structural characterisation of metal oxide thin films, but they have several limitations as they do not provide detailed information on the atomic arrangement around the absorbing atom or on its oxidation number. Moreover, these techniques are challenging if used for studying thin films after insertion into a MIM structure due to the highly scattering metal electrodes and silicon support.

Researchers from the University of Southampton and the University of Kent used microfocus X-ray absorption spectroscopy (XAS) techniques on Beamline I18 at Diamond Light Source to investigate highly disordered titanium oxide-based materials at the atomic scale in its virgin state and after switching to low resistance states by bias. X-ray Absorption Near-Edge Structure (XANES) was used to give information on the oxidation state and site symmetry of Ti, and Extended X-ray Absorption Fine Structure (EXAFS) to give detailed information on distances and coordination numbers of neighboring atom shells surrounding the Ti atom.

To date, only a few studies have been published on XAS analysis of TiO2−x thin films for memristive devices, and they are all based on the analysis of the Ti L2,3-edge. However, the spectroscopy techniques applied in this study to the Ti K-edge have been shown to be more effective in assessing very small changes in the local coordination around Ti due to structural modification, in particular through the analysis of the Ti K pre-edge XANES region under operating conditions.

“Beamline I18 is ideal for the investigation of our microdevices, as it gives the ability to focus the beam to a micron sized spot on the device active junction. I really enjoyed working on beamline I18 and I would like to thank the Diamond scientists for their helpful advice”. 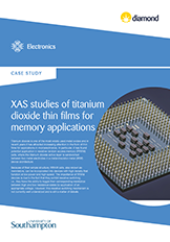