Controlling crystallisation in fuels and biofuels

The “freezing” of diesel fuel in winter has been a problem since its inception. Wax crystals nucleate and grow and block fuel lines and filters which can lead to vehicle failures and motorists being stranded. Additives are used to control these crystals but, over recent years, the use of biofuels (fatty acid methyl esters) within diesel blends has become increasingly common.  This can adversely affect the low temperature operability of the fuel. Legislation demands that biofuels are part of diesel blends throughout the EU, with levels expected to increase. 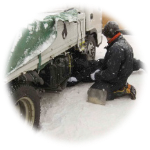 Conventional fuel additives, aimed at preventing crystallisation problems in such conventional fuel + biofuel mixtures, often have difficulty in treating all fuel types. As pioneers in this industry, scientists at Infineum are constantly seeking to develop new fuel additives to prevent diesel engines from failing during cold temperatures. The additives are aimed at affecting  both nucleation and the control of crystal growth of the conventional and biofuel components. 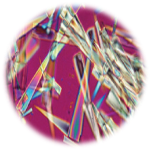 Diamond offers a range of advanced characterisation tools and Infineum scientists have used a range of them to gain a deeper understanding of the crystallisation processes in biofuels.  Small angle X-ray scattering data collected on beamline I22 has been used to understand the nucleation mechanism.  The crystal growth occurs on a bigger length scale and therefore X-ray powder diffraction has been performed on I11.  By using the high time resolution set-up on the beamline, the structure of the wax crystals which are formed during cooling of the fuel could be followed.  The structure of the wax crystals formed was then determined using single crystal techniques on beamline I19.

The combination of techniques available to industry at Diamond has allowed Infineum to gain a deep understanding of the processes occurring on different length- and time-scales during the crystallisation of the waxes. Any of the analytical methods used in isolation would not have been useful for disentangling the various phenomena but, by using a combination of methods, the results can be used to direct Infineum’s present and future additive modifier design.

“The combination of world-leading capabilities and scientists at Diamond together with the knowledge of Infineum scientists has created unique academic/industrial teamwork with a clear line-of-sight to real-world industrial problems. This has enabled advances in both fundamental understanding and industrial solutions.”
Prof. Ken Lewtas, Infineum UK Limited 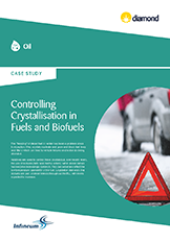