Methylxanthines, including caffeine, theophylline (found in tea), and theobromine (a constituent of chocolate) are among the most widely consumed substances in the world, but their effects on the brain are not fully understood. Previously published research has shown a correlation between higher intake of caffeine and lower incidence of Parkinson’s disease. Adenosine A2A receptors regulate the effects of neurotransmitters in the brain, cardiovascular and immune systems, and are of particular interest as a drug target.

Heptares Therapeutics is a pioneer in the discovery of new medicines targeting G-protein-coupled receptors (GPCRs). To develop these, they need detailed structural information about these molecules and the molecular mechanism involved in binding to drug candidates. A2A receptor antagonists, in particular, have shown clinical efficacy in the treatment of Parkinson’s disease. First generation A2A antagonists using older furan and xanthine type chemical structures have been associated with various safety, tolerability, and pharmacokinetic limitations. The Heptares team needed detailed 3-D structural information to develop the next-generation of A2A antagonists.

The team used Diamond’s Microfocus Macromolecular Crystallography (MX) beamline (I24) to reveal the complex structure of the vital adenosine A2A receptor and show how xanthine-based drugs such as caffeine bind to their target. Their findings, published in the journal Structure, pave the way for a new generation of targeted drug treatments.

The adenosine A2A receptor is a G-protein-coupled receptor (GPCR). GPCRs are responsible for transmitting chemical signals into a variety of different cell types. There are over 700 GPCRs encoded in the human genome and as many as 75 of these have clinical validation, presenting a wide range of opportunities as therapeutic targets in areas including cancer, diabetes, central nervous system disorders, obesity and pain.

“GPCRs represent the single most important family of drug targets in the human body because they are central to so many biological processes. The design of drugs for GPCRs is hampered by the lack of structural information so access to a facility like the Diamond synchrotron is vital to our research. It has enabled us to solve the 3D structure of the adenosine A2A receptor in complex with caffeine and other xanthines as well as our own novel drug candidates.”
Dr Andrew Doré, Senior Scientist at Heptares 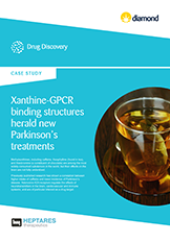