Respiratory infections are one of the biggest killers in the western world, and pneumococcal infections can range from mild to potentially deadly. Children and the elderly are most at risk, as well as those with compromised immune systems. There are approximately 90 distinct pneumococcal serotypes and, although not all cause disease, this makes treatment challenging. An effective conjugate vaccine has been available since 2001, however there has been a rise in antibiotic resistance in serotypes not covered by this conjugate vaccine and previously non-infectious serotypes are increasing in virulence. This makes treatment of pneumococcal pneumonia and less severe illnesses such as otitis media more difficult to manage. Therefore finding new approaches to combat pneumococcal disease remains a high priority.

Pneumococcal sialidases show promise as targets for both vaccines and small molecule inhibitors as they are implicated in host colonisation and pathogenesis. They facilitate bacterial invasion of host cell surfaces and promote biofilm formation. S. pneumoniae bacteria contain up to three sialidase enzymes; Nan A, B and C. The structure of two of these enzymes – A and B – is known. However, high resolution structural information was required to uncover the structure of NanC, providing the final step in identifying how these enzymes work to sustain S. pneumoniae and how they could be targeted and disabled.

Scientists from Diamond Light Source and the University of St Andrews have used crystallographic techniques on Diamond’s I04 beamline to uncover the structure of the pneumococcal sialidase NanC. The structual studies have revealed a structurally rationalised and novel mechanism for the unusual production of Neu5Ac2en, a nonspecific inhibitor of hydrolytic sialidases, by the NanC sialidase and complete the structural description of the pneumococcal sialidase catalysis. 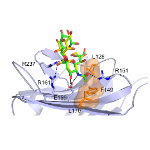 The mechanistic diversity shown amongst the three sialidases, NanA, NanB and NanC, hint at the evolutionary pressure to adapt to environmental niches, which vary in substrate type and quantity and underline their importance for bacterial nutrition and successful host cell invasion. These works therefore highlight the importance of thorough structural characterisation of sialidases; although they may appear superficially very similar, they show significant mechanistic diversity.

“With a fuller understanding of the structure and function of S. pnemoniae’s three neuraminidase enzymes, we’re now better equipped to design next-generation antibiotics for some of the world’s most prevalent and deadly respiratory infections.”