Investigation of metal deposition in organs after joint replacement

The hip replacement is considered to be one of the most successful orthopaedic interventions, with 75,000 performed each year by the NHS alone. However, the implants used to replace hips contain metals, such as chromium and cobalt, which are potentially toxic and which can be deposited into tissues around the implant site due to wear and corrosion. A team of researchers used X-ray absorption spectroscopy (XAS) on the I18 beamline to show that these metals can also find their way into organ tissues. Their results suggest that chronic diseases, such as diabetes, may create conditions in which mildly toxic trivalent chromium (CrIII) particles from replacement joints are reoxidised within the body to form carcinogenic hexavalent chromium (CrVI). Their results have been published in the Journal of Trace Elements in Medicine and Biology. 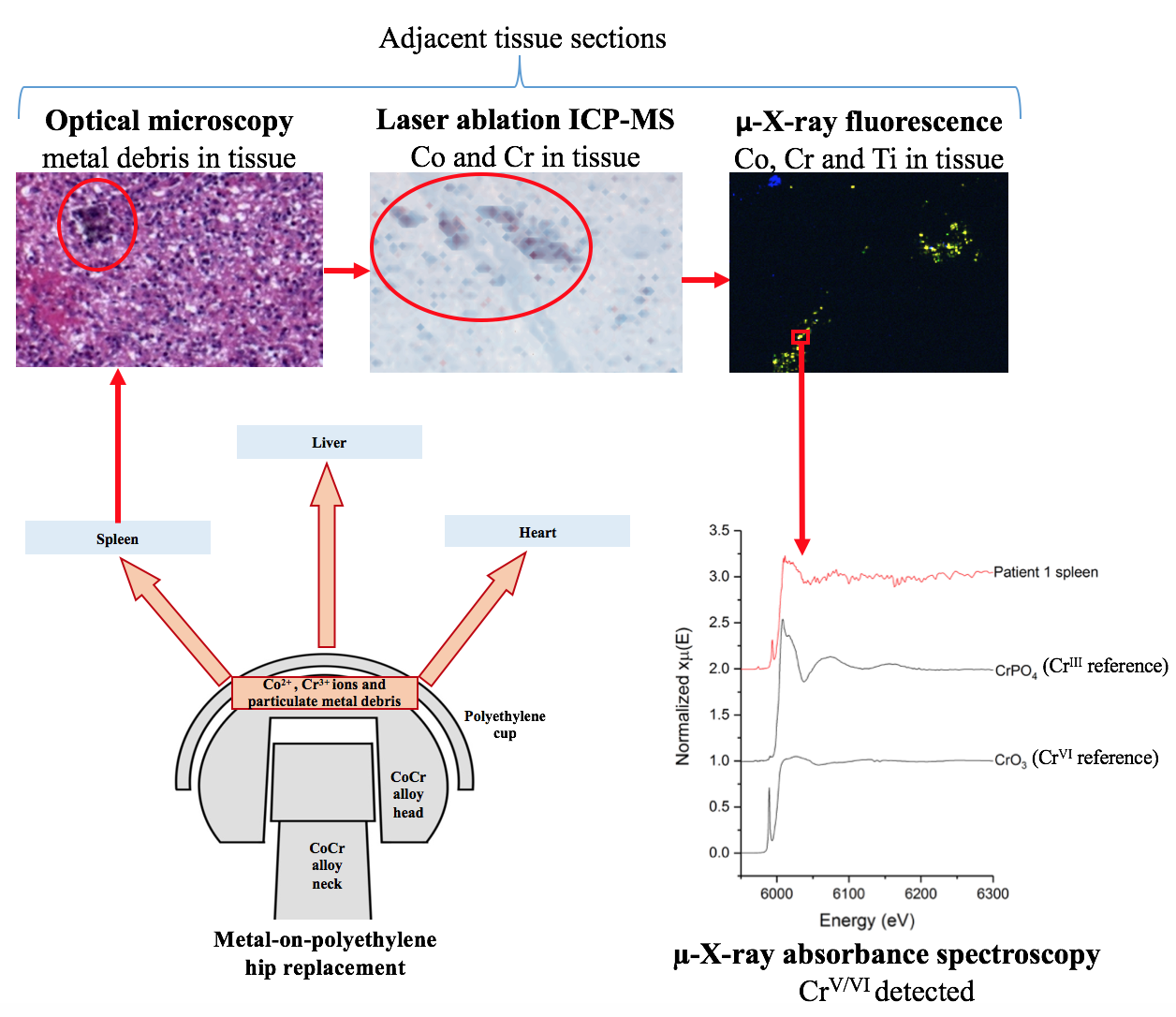 Figure 1: Overview of the study.

Metals on the move
Hip replacement operations have over a hundred years of history, with the earliest recorded attempts taking place in Germany in 1891. Pioneering English surgeon George McKee was the first to use metal-on-metal (MOM) hip joints on a regular basis, in the 1950s, and Sir John Charnley at the Manchester Royal Infirmary pioneered the modern hip replacement technique in the early 1960s. MOM implants became unpopular in the 1970s when follow-up operations found metal particles in the tissues around the implant. Metal-on-polyethylene (MOP) implants are now the most widely used type.

Although previous research has established that metal particles from the cobalt-chromium (CoCr) alloy can be found in tissues surrounding the implant, little work has been done on the effects on systemic or organ tissues. This study was the first to combine the use of micro X-ray fluorescence and micro X-ray absorption spectroscopy to probe the distribution and chemical form of cobalt, chromium and titanium in organ tissue samples from patients who had been given MOP hip implants.

Toxic potential
CoCr alloy is used in medical implants because a chromium oxide-rich passivation layer forms over its surface, protecting the underlying metal from corrosion. However, this protective film can be damaged by wear and corrosion once the implant is inside the body.
Cobalt from implants can be found in two forms inside the body, with its divalent (CoII) state being more toxic than the metallic (Co0) state. Elevated levels of cobalt in the blood are linked to neurological complaints, cardiomyopathy and hypothyroidism.

A team of researchers used tissue samples from the liver, spleen and heart of five patients who had undergone a hip replacement. Preparatory work guided the choice of tissue areas to be examined more thoroughly using synchrotron techniques. They used micro X-ray fluorescence to map the metallic elements, and micro XAS spectra acquired in fluorescence mode due to the low concentrations of metals in the samples. Using the XANES part of the spectrum allowed the researchers to determine the metallic states present. The advantages of using a synchrotron for this work include the non-destructive nature of X-ray techniques, their sensitivity and their ability to map large areas of tissue. 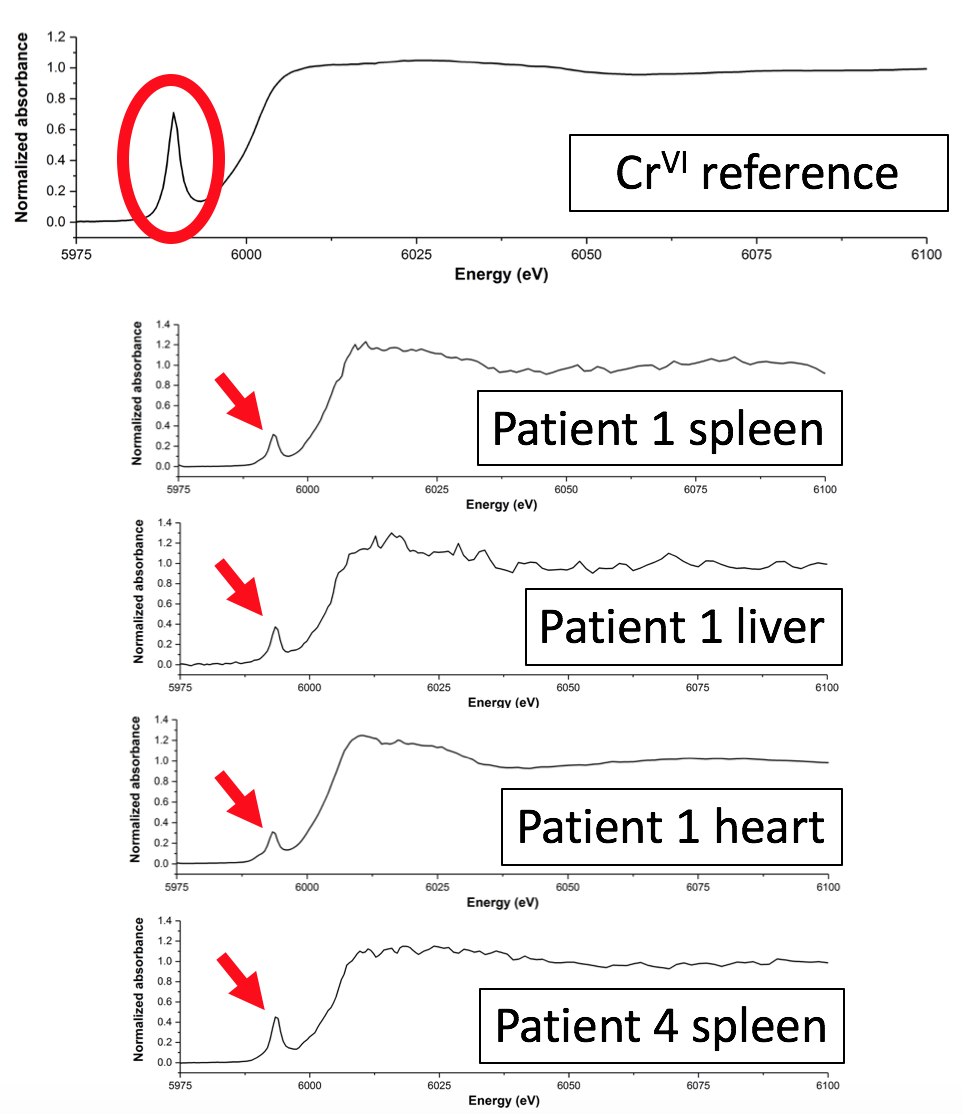 A possible link to chronic disease
This was the first visit to Diamond for lead author Ilona Swiatkowska. She found the support of the beamline staff invaluable, noting that “beamline scientist Konstantin Ignatyev stayed until midnight (at the weekend!) to make sure we were able to get the best possible results.”

Since any CrVI released from the implant would have been reduced in the blood before it reached any organs, it is unlikely that the highly oxidised Cr particles came from the implant directly. It is more likely that CrIII was re-oxidised to CrVI within the body. The samples in which these highly oxidised states were found came from two patients with diabetes, and it is possible that the increased production of reactive oxygen species associated with diabetes (and other chronic diseases) could have encouraged oxidation of CrIII from the implant to higher valence states.

There is limited evidence of an increased risk of cancer in patients who have undergone a hip replacement. However, most of the previous studies suffer from a short follow-up time, which might be insufficient to detect any malignant changes. With more younger patients recommended to have joint replacements, there will be an increasing number of patients exposed to implant materials for 30 years or longer. Further toxicological studies, including patients with chronic disease, are needed to confirm these preliminary findings, and to determine which patients may be at a higher risk of tissue damage and cancer.
To find out more about the I18 beamline, or to discuss potential applications, please contact Principal Beamline Scientist Prof Fred Mosselmans: fred.mosselmans@diamond.ac.uk