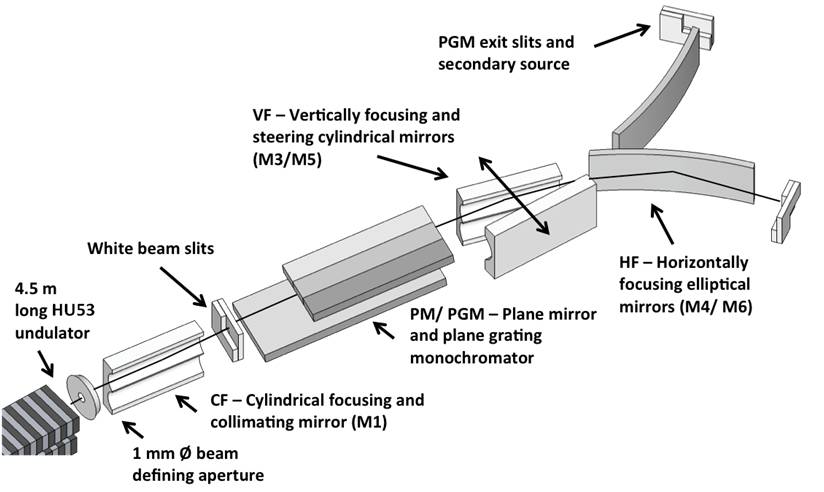 At I08-SXM, the X-rays are generated by a 4.5 m long Apple-II helical undulator-type insertion device that provides linear horizontal and vertical polarised X-rays in the 250-4200 eV photon energy range using 1st to 5th harmonics, and 250-1200 eV circular polarised light. The first element in the optical scheme is a beam defining aperture of 1 mm2, which adapts the limited acceptance ange of the microprobe forming optic in the end station, and reduces drastically the total power inicident on the first mirror optical components. A first vertically focusing mirror with Au and Ni coatings is operated at 0.7 deg incidence angle and acts as low-band pass filter in order to suppress any spurious and undesired radiation. This mirror collimates also the beam into a SX-700 type plane grating monochromator to be operated over a 250 - 4200 eV photon energy range. Vertically collimated beam geometry allows the plane grating monochromator to be operated in fixed-exit geometry with free selection of the fixed-focus value. A slit system downstream of the first mirror has mainly the purpose of beam cleaning. Stigmatic, low-aberration refocusing of the beam has magnifications of 0.03 in horizontal and 0.2 in vertical considering a source size of 300 micron in horizontal and 50 micron in vertical. This is difficult to achieve by means of toroidal mirror refocusing with optimised magnification of 1, and is thus performed by combination of a horizontally focusing cylindrical mirror and a vertically refocusing elliptical mirror. These two refocusing mirrors generate a stigmatic focus used as exit slit of the monochromator and as secondary source for the microscope(s).

As illustrated by this scheme, I08-SXM is designed to host a future second branchline by adding a second horizontally focusing mirror and a second spectromicroscopy end station.

I08 is composed of one lead-shielded optics hutch, two optics cabins and an experiments cabin, and two control rooms. The optics hutch has radiation safety components like a gas bremstrahlungs collimator and stop, and the 1st optical component, collimating mirror optics. Optics cabin 1 hosts the monochromator and switching/vertical focusing mirror optics, which can steer the beam downstream to the main branch and the side branch exclusively. In Optics Cabin 2, there is a horizontal focusing mirror optics for the main branch and we would have another horizontal focusing optics for an end station for the future side branch. In the Experiments Cabin we have a scanning x-ray microscope end station and an exit slit system for the main branch, where will have restricted access through air lock from control room 1 to keep precise temperature control for the long-time stability of the key instruments. Control room 2 will be used for the future side branch, but meanwhile is used as an additional specimen preparation room. Beside the CR2, I08 has a prepheral laboratory across the corridor, Lab 52 (shared with another group at present).