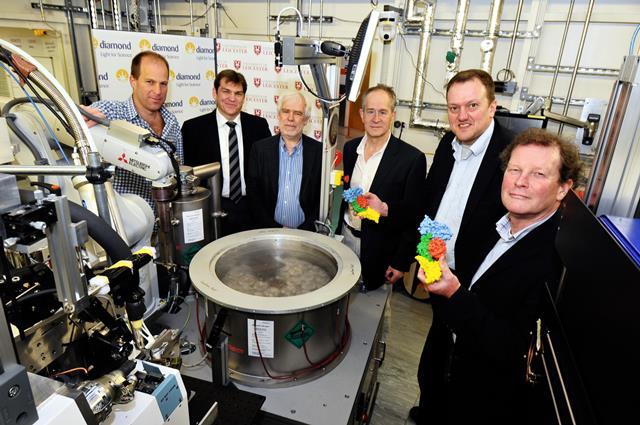 Frank von Delft, (Diamond Light Source, Principal Beamline Scientist I04-1), John Barker (Vice President Structural Biology at Evotec), Professor Dave Stuart (Diamond's Life Sciences Director), Peter Moody, Russell Wallis, and Peter Andrew from Leicester University on the I04-1 beamline where Diamond's new fragment screening facility is based. Scientists from Leicester hold the crystal structure, Pneumolysin.
Oxfordshire, 24th November 2015. From today, scientists working to design new medicines to treat a wide range of diseases will have access to a world-first facility based at Diamond Light Source – the UK’s national synchrotron science facility – for accelerating the process of developing novel compounds for drug discovery.
Prof Dave Stuart, Diamond’s Director of Life Sciences and Head of the Division of Structural Biology in the Department of Clinical Medicine at the University of Oxford, comments: “We are delighted to be able to offer the new XChem facility to both academic groups and drug development companies so that they can speed up the early stages of rational drug design.”
“Scientists are using Diamond to study a wide range of viral and bacterial infections, along with cancer, heart disease, diabetes and neurodegenerative conditions such as Alzheimer’s and Parkinson’s.  While great progress is being made, on averageit still takes at least ten years for a new medicine to complete the journey from initial discovery to the marketplace. Having a facility like XChem at the synchrotron is therefore a major step forward, allowing scientists to evaluate the equivalent of millions of compounds using just a few hundred much smaller compounds (named “fragments”).  We believe it will give a particular boost to the combat of neglected diseases, where non-commercial research plays a major role, thereby greatly amplifying the impact of making available cutting-edge drug discovery technology.”
Though well-established, the screening technique has not to date has not been available in a central facility location to scientists from across the UK and beyond.  Moreover XChem introduces a step-change in the sensitivity of the experiment, by harnessing synchrotron X-rays so that fragments can be directly observed interacting with the target protein.  This allows structural biologists to identify where drugs could potentially bind, to target that particular area for further research.  The duration of the experiment has also been shrunk from months to days, through extensive streamlining by new technologies developed at Diamond and in partnership with the Structural Genomics Consortium at Oxford University, delivering unprecedented performance and making it possible to support a wide user base.

Frank von Delft (L), John Barker (M) and Dave Stuart (R)
A key advantage for UK science is that this best-practice experimental procedure will now be available to large numbers of scientists from academia, along with researchers conducting R&D work for SMEs and large pharmaceuticals, all of whom are looking to advance their structural based drug design activity.
Dr Frank von Delft, jointly head of the XChem facility and the partnering lab at Oxford University, remarks, “It is only a world-class national synchrotron like Diamond that makes such a facility conceivable, and it is its strong collaborative links with the UK’s universities that then leads to the creation of next-generation technologies like XChem.”
The integrated facilities on offer at Diamond place the UK at the forefront of life science research. Life sciences minister, George Freeman MP comments: “This development from Diamond shows the UK punches above its weight in the field of structural biology. The techniques on offer at XChem will save both time and money by swiftly identifying the most promising drug targets before more in-depth research takes place. This will help drive innovation in vaccine design, and the prevention of antibiotic resistance.”
John Barker, Vice President Structural Biology at Evotec, adds, “Building on an established relationship formed over many years of successful collaboration, Evotec and Diamond have worked closely to deliver the XChem platform for rapid identification of novel starting points for drug discovery campaigns for the drug discovery community.   The new fragment-based discovery platform complements the breadth of techniques available at established companies, such as Evotec, while opening a new path to discovery for academic groups.  Evotec is already making use of the XChem facility. Although details remain confidential for these early drug discovery campaigns, invaluable information is helping to progress multiple therapeutic targets for our international collaborators.” 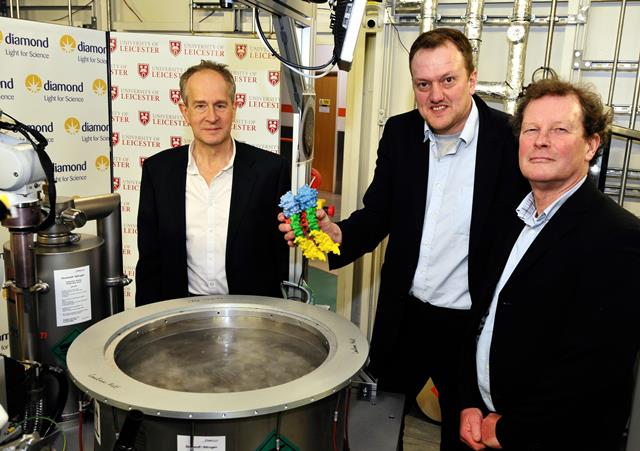 A recent discovery that has the potential to benefit from the fragment screening facility has been led by a team of scientists from the University of Leicester.  They have successfully solved the structure of the elusive protein pneumolysin.  This toxin, which is secreted by Streptococcus pneumoniae bacteria, is capable of killing cells. In doing so, it helps these bacteria, which are responsible for a range of serious illnesses including pneumonia, meningitis and septicaemia, to take hold in humans.

Funded by the Wellcome Trust and the Medical Research Council, the University of Leicester research was led by Professor Russell Wallis of the Departments of Infection, Immunity and Inflammation and Molecular and Cell Biology and Professor Peter Andrew, Head of Department of Infection, Immunity and Inflammation.  The crystal structure, published in the journal Scientific Reports, also represents a significant milestone for Diamond.  Pneumolysin is the 3,000th protein structure to be solved at the facility and deposited in the Worldwide Protein Data Bank since Diamond came online in 2007.
Russell Wallis said: “Our research is about a toxin called pneumolysin produced by a bacterium called pneumococcus(aka Streptococcus pneumoniae). Pneumococcal infections are the leading cause of bacterial pneumonia as well as the cause of a range of other life-threatening diseases such as meningitis and septicaemia. Pneumolysin is instrumental in the ability of pneumococcus to cause disease. The World Health Organization (WHO) estimated that more than 1.6 million people die every year from pneumococcal infections, including more than 800,000 children under 5 years old.

“The aim of the research was to find out how pneumolysin kills our cells, thereby causing tissue damage and contributing to disease. In particular we wanted to find out how multiple copies of the toxin assemble on the surface of cells.
“We managed to determine the structure of pneumolysin using a technique called X-ray crystallography, which enables us to see the individual atoms of the toxin. The structure not only reveals what the toxin looks like, but also shows how it assembles to form lethal pores.
“Ours is the first detailed structure of pneumolysin. This level of detail is important and useful because it enables us to begin to understand how the toxin works. For example, we can see which parts of the toxin come together during pore assembly.  When we disrupt these contacts, the toxin becomes inactivated so it can no longer kill cells.
“Using crystallography beamlines at Diamond Light Source, our team has been able to determine the full-length pneumolysin at high-resolution (ten millionths of a millimetre).  Down at this level, we can determine the molecular interactions on the cell membrane and work out exactly how the protein forms the pores that are lethal to the body’s cells.  Having this knowledge is very exciting as it forms the basis for rational approaches to designing drugs that block assembly of pneumolysin pores to treat people with pneumococcal disease.  The University of Leicester has recently set up a company, Axendos Therapeutics, to pursue this aim.
Dave Stuart adds: “This is a fantastic achievement for the Leicester group and a significant milestone for Diamond.  We are one of the top synchrotrons in the world when it comes to the number of proteins that scientists are depositing in the Protein Data Bank.  We have reached the 3,000th structure at a very exciting point in our development with several new life science beamlines under construction as part of Diamond’s Phase III expansion.”

He continues: “Ultimately, this work reinforces Diamond’s role as a vital source of structural information and demonstrates how integral science is throughout the development process, from fundamental work to delivering new drugs.”