First insight into the architecture of viral filaments

Researchers at the Universities of St Andrews and Glasgow have made a significant step forward in tackling a viral disease which causes frequent epidemics in Africa and could spread to Europe due to global warming.

Dr Michal Barski and Dr Uli Schwarz-Linek of the School of Biology at the University of St Andrews, with colleagues at the University of Glasgow, have published a paper in online journal eLife revealing new information about a key molecule used by the virus to cause disease, which could help to eventually find a cure or a vaccine. 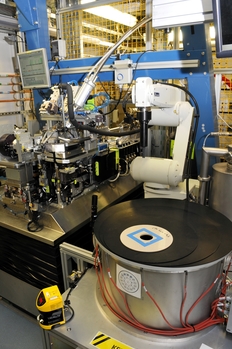 Figure 1: The experimental hutch of I03 showing the robot (right) and goniometer (left).

Rift Valley fever phlebovirus (RVFV) is a virus affecting humans and livestock which is transmitted by mosquitos and contact with infected animals. RVFV is increasingly likely to cause widespread epidemics, and could potentially follow the pattern of Dengue virus or West Nile virus and spread to temperate regions, such as Europe or the USA, as global warming allows the mosquitos which carry the virus to extend their geographic range.

Infection can cause severe disease, including haemorrhagic fever, and may lead to death. Historically, the virus was only found in central Africa but has spread to the Arabian Peninsula. There are no vaccines or treatments available for use in humans so if there is a serious outbreak of the virus it could become an epidemic and cause great economic loss and severe human disease.

The research team combined two techniques, NMR spectroscopy, and X-ray crystallography, carried out on the Macromolecular Crystallography beamline (I03) at Diamond Light Source, to study the atomic three-dimensional structure of NSs - a key molecule of the RVFV virus which assembles into large fibres inside infected cells.

The virus relies on NSs to cause disease but the mechanism behind this process, and the formation of the fibres, have not been fully understood.  The structure of this molecule revealed that only the central part, or core domain of the protein is needed for the fibres to form. Further experiments identified how NSs molecules come together to build the fibres inside the infected cells.

Dr Schwarz-Linek said: “The structural insights we generated will help to unravel the complexity of Rift Valley fever. It will pave the way for research on Rift Valley fever phlebovirus and many other related viruses that have the ability to infect animals and humans.”

Dr Barski added: “With this research we have opened up a new avenue for understanding Rift Valley fever virus and hopefully also for developing therapy targeted at this virus. The recent, sudden epidemics of Ebola virus and Zika virus have highlighted the need to understand dangerous tropical viral diseases which could quickly spread to far away places. Rift Valley fever is on that very short list of viruses which might cause large epidemics next.”

Principal Beamline Scientist of I03, Dr Katherine McAuley, says “This is an important piece of research, and is one of a number carried out on I03 and on other MX beamlines looking at the mechanisms of viral pathology in both human and animal disease. The researchers in this team used an interesting technique at the longer end of our operating wavelengths to solve the structure of the NSs protein, so we are particularly pleased to see that this creative approach has yielded such a good result. We hope that the next steps for this research will lead to the successful discovery of new avenues to treat Rift Valley Fever. ”

These findings mark an important step towards understanding how the NSs protein helps RVFV to cause disease in humans and livestock. In the future, this work may aid the development of much needed drugs and vaccines against RVFV.

To find out more about the I03 beamline, or to discuss potential applications, please contact Principal Beamline Scientist Dr Katherine McAuley, katherine.mcauley@diamond.ac.uk.