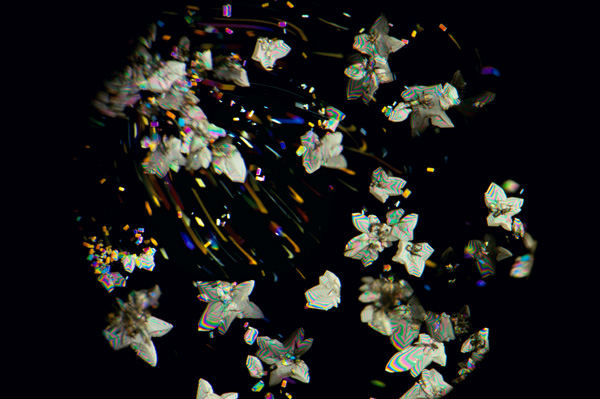 Pharmorphix, Cambridge: The rapid crystallisation of the proprietary cancer drug shown here mimics the metamorphosis from the early years of cancer treatment to the groundbreaking, life-saving drugs available today.
Pharmorphix focuses on understanding, enhancing, and optimizing the physical properties of active drug substances and the final drug product to deliver safe and effective medicines.
Max Alexander

From crystals of cancer drugs to atomic patterns drawn in the sand, a new photography exhibition at the Royal Albert hall perfectly captures the beauty and intricacy inherent in the science of crystallography.

Illuminating Atoms, by the photographer Max Alexander, depicts a series of documentary images of crystallography experiments in action, alongside portraits of modern day crystallographers. The exhibition, which is sponsored by the Science & Technology Facilities Council (STFC), the Wellcome Trust, GSK, AstraZeneca, Pharmorphix and Diamond Light Source, conveys the untold story of crystallography, demonstrating the range of science taking place and the rich and vibrant community working in this field.

Crystallography was first discovered in 1912, by a father and son team: William Henry and Lawrence Bragg. The intrepid scientists worked out that shining X-rays on a crystallised sample created a pattern of light and dark spots that could then be used to determine the position of atoms inside the object. The light and dark spot images, known as diffraction patterns, result from X-rays being bounced off the atoms and diffracted in different directions. Lawrence, the younger Bragg, determined a formula – now known as Bragg’s Law – by which scientists could use the diffraction pattern to identify the exact atomic structure of any crystallised sample. 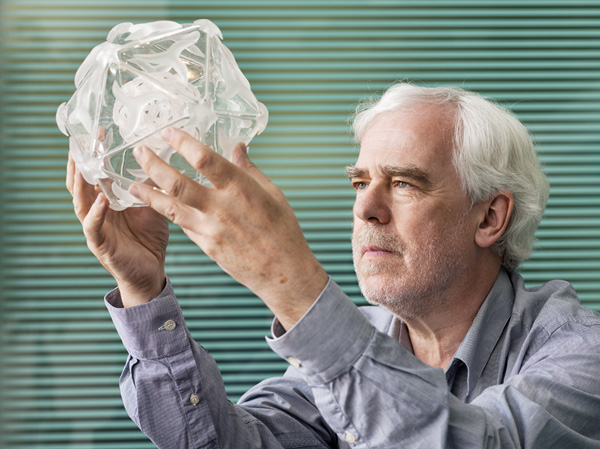 David Stuart is a biologist who studies viruses; how they infect, spread, and evolve, and how they can be treated with targeted medicines. He is holding a sculpture of the hand, foot and mouth virus, a childhood disease that infects 1.6 million people each year. David solved the structure of the virus at Diamond Light Source and has since created a potential cure for this currently untreatable disease. His work may also lead to new treatments for other diseases, such as polio.
Max Alexander/Diamond Light Source

Since its inception, over 100 years ago, crystallography has had an illustrious history, having supported the discovery of antibiotics, penicillin, and the double helix in DNA. The technique is still used today to study a vast range of matter, including viruses like HIV, treatments for cancer, advanced nanotech materials, and innovative green energy solutions.

The exhibition, which features scientists and experiments from academia and industry, is made up of 37 photographs, depicting both the science and the people on the front line. Illuminating Atoms builds on some of the key tropes of crystallography – the diffraction pattern, Bragg’s law, atomic structure – to demonstrate the rich complexity of the field. David Keen, ISIS physicist and President of the British Crystallographic Association, was pictured on a beach next to a diffraction pattern drawn into the sand. 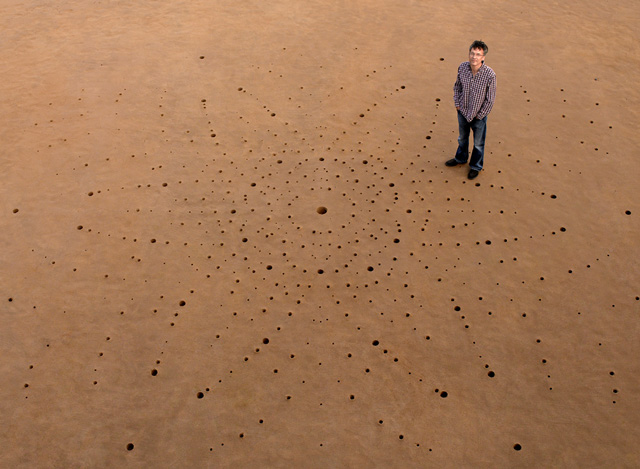 David Keen studies crystal structures that behave in unusual ways when their atoms become disordered; they might unexpectedly melt, change into a glass, or start conducting electricity. Hundreds of holes were dug in the sand in Porthcawl beach in South Wales to portray the neutron diffraction pattern from a quartz crystal. Quartz is one of the minerals David has studied and is a common component of sand.
Max Alexander

David reveals the behind the scenes work that went into creating the pictures: "I can tell you that making 641 precisely arranged holes in the sand is pretty hard work! But I enjoyed the idea that the neutron diffraction pattern we were drawing was from a quartz crystal, the key compound in sand. The picture is very thought-provoking in that way."

Diamond scientists also featured prominently in the exhibition. Dave Stuart, Director of Life Sciences at Diamond, was pictured peering into a glass sculpture of hand, foot and mouth disease: a virus he solved and created an inhibitor for using crystallography at Diamond. Anna Warren is a postdoctoral research associate on I24, one of the life science beamlines, and she is pictured looking into a mirror which has the formula for Bragg’s Law written on it, a concept which has some clever undertones: “We used a mirror to display one of the most important equations in science – Bragg’s Law, as well as several space groups related to crystal symmetry. I like the hidden meaning underlying the picture; it’s taken through a mirrored reflection, and that’s significant because mirror symmetry is inherent in many crystal structures.” 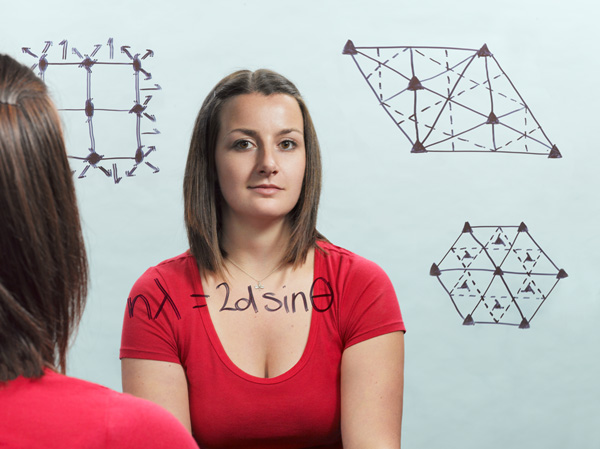 Anna Warren works as a protein crystallographer at Diamond Light Source. She uses a high-intensity X-ray beam to probe tiny crystals, from which she can deduce the structure of the crystals at the molecular level. The high-intensity X-rays are very damaging to the crystals, so Anna has to work quickly, probing each crystal for just a few seconds. The intricate diagrams Anna has drawn on the mirror are a short-hand way to describe how symmetry (reflections, rotations, etc.) dictates how atoms and molecules pack in crystals.
Max Alexander/Diamond Light Source

The exhibition is unique in its depiction of a broad range of scientists and experiments; that’s because, for Max, the exhibition was about telling the untold story of crystallography: “My mission was essentially to connect the public to this astonishing scientific technique. Crystallography has been hugely significant throughout the 20th Century, and crystallographers continue to make a real contribution to society through their work. It’s something I wanted people to know about, and I’ve endeavoured to tell that story in a beautiful and engaging way.”

One thing that clearly stands out in Illuminating Atoms is the diversity within crystallography, both in terms of the experiments it supports and the people performing them. One documentary image shows two technicians creating a fan blade for a Rolls-Royce jet engine; the caption explains that crystallography helps to inform the manufacturing process, ensuring the blades are strong and safe. Another image depicts novel cancer drugs for potential use in medical treatment.
It’s not just the applications of crystallography that are diverse; the portraits depict crystallographers of all ages and backgrounds, and what’s more, 10 of the 21 portraits are of women. Max explains: “I wanted to highlight the number of women working in crystallography; and that goes back through history to figures like Dorothy Hodgkin and Rosalind Franklin: crystallographers who altered the course of scientific history.” 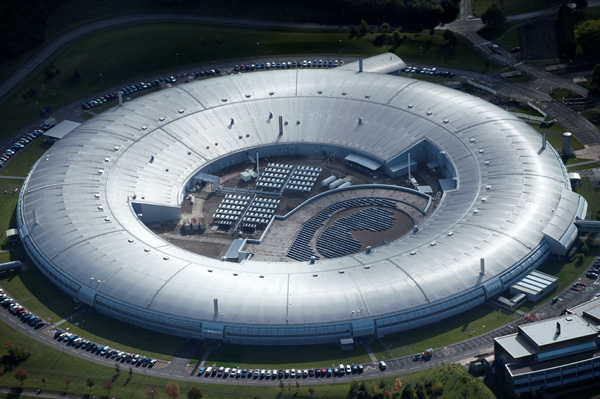 Diamond Light Source is the UK’s synchrotron science facility, producing light 10 billion times brighter than the Sun. Each year, more than 3000 scientists visit Diamond to use the beams for experiments, and many of these researchers are crystallographers. Solving the structure of insulin took Dorothy Hodgkin 30 years, but with Diamond it could have been done in an hour.
Max Alexander/Diamond Light Source

Crystallography has been deeply significant to the history of science, but it’s also made its mark on social history. The story of crystallography boasts some high profile female figures, including Kathleen Lonsdale, Helen Megaw, Rosalind Franklin, and Nobel Prize winners Dorothy Hodgkin and Ada E. Yonath. Featuring women from all fields using crystallography, Max’s photographs convey the vital role women continue to play in the field.

Diamond’s Claire Murray, support scientist on I11, played a significant role in the project, organising logistics and supporting a number of the shoots. Claire comments on the gender aspect of both the exhibition and the wider field of crystallography: “Back in the 1920s, the Braggs taught many female students and this legacy appears to have had a sustained impact; in the 21st century, we continue to have large numbers of established and upcoming women crystallographers. It was essential to reflect this in the exhibition given how unusual it is to see gender balance in the sciences, and I am proud to have been a part of a project that highlights the vital contribution that women have made and are continuing to make in crystallography.”

The exhibition sends the message loud and clear: crystallography is as exciting as it is beautiful. Max’s images of vast scientific facilities juxtaposed with minute crystal structures demonstrate the intricacy of crystallography; whilst his portraits illustrate the gamut of personalities that work in the field. Pairing visual splendour with the human story, Illuminating Atoms creates a powerful picture of this hugely significant scientific technique.

Illuminating Atoms will be available to view at the Royal Albert Hall from 10am – 4pm on Sat 15th,Sun 16th and Sat 29th Nov - www.stfc.ac.uk/illuminating_atoms_portraits 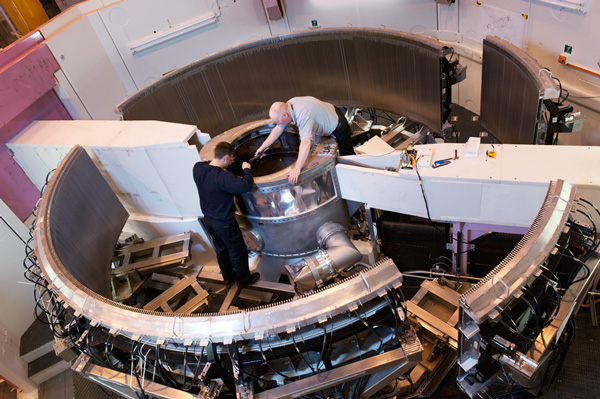 STFC ISIS WISH Diffractometer, Didcot: Engineers maintain the WISH instrument, which is used for neutron-crystallography experiments.  This diffractometer, with its large array of detectors encircling the sample, is perfect for studying the arrangement of magnetic atoms in exotic superconducting crystals.