This is the 5th issue of Diamond's
popular science magazine:
Inside Diamond 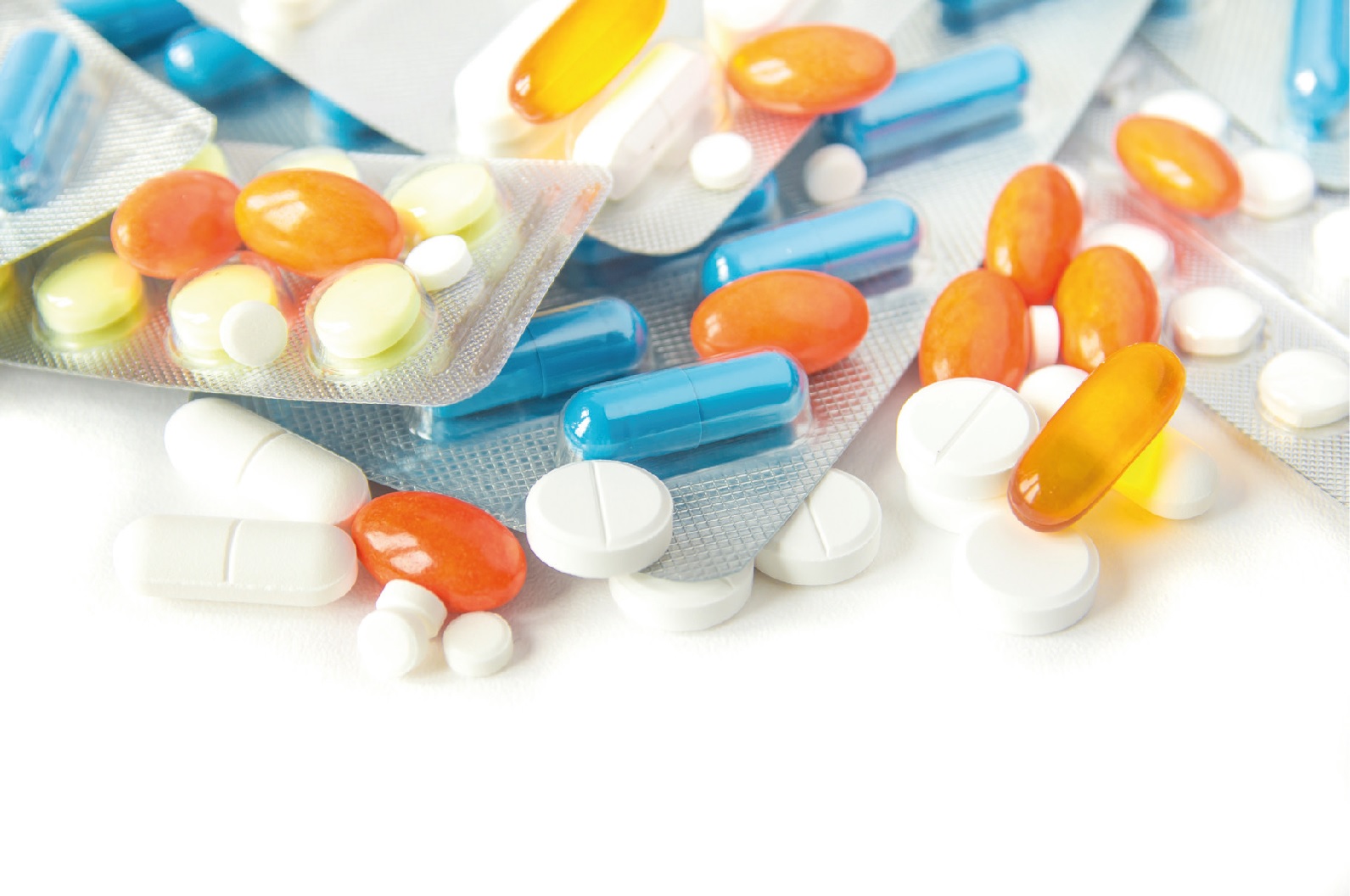 The threat of antibiotic resistance is one of the greatest challenges facing humankind. Since their advent in the 1940s, antibiotics have saved millions of lives around the world. But bacteria are fighting back. As more and more bugs become resistant to antibiotics, we have to find a way of making drugs more effective again or else risk reverting to a pre-antibiotic age, when minor infections could kill. So scientists are on the hunt for new weapons in the war against pathogenic bacteria, and Diamond is helping to illuminate chinks in the armour. Tenacious and quick to evolve, bacteria are a formidable enemy but, in this fight, science is our secret weapon.
Bacteria survive because they evolve, not in the traditional sense, over thousands of years, but extremely quickly, sometimes in an instant. Bacteria replicate in vast quantities. They also multiply very quickly. So beneficial mutations are more likely to occur, and when they do, they spread fast. This means that they can quickly learn how to bypass drugs. It’s much harder to hit a moving target, and bacteria have a real evolutionary advantage: they can change faster than we can develop drugs.
To add to the problem, very few new antibiotics have come on to the market in recent decades. Because the drugs only work for a short time, the financial incentive for pharmaceutical companies to create new antibiotics is limited. And without new approaches to tackling bacteria, we’ll soon be left with drugs that simply don’t work anymore.
Diamond is a hub for research into new drugs and strategies for overcoming resistance. The synchrotron’s bright beams allow scientists to look at the interaction between drugs and their target at the atomic scale – with this level of understanding, we can design drugs that bypass bacteria’s defences.
Researchers from the University of Southampton and Diamond are working on an entirely new approach to tackling bacteria. The team brings together expertise in microbiology, biochemistry, and structural biology to aid a fuller understanding of biofilms: huge collections of bacteria that cluster together to create a thick and slimy mass. 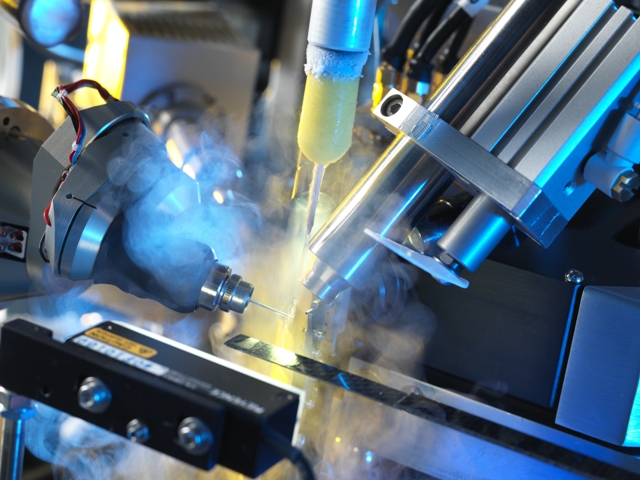 The experimental set up on one of Diamond's MX beamlines, I04
Biofilms are the predominant life form of bacteria. In this state, bacteria grow in organised coloniesand become immobile – this can make them really difficult to get rid of. Biofilms can cause chronic infections, such as non-healing wounds, and persistent infections that affect people with cystic fibrosis. They also represent health threats through growth on implants or catheters.
Jeremy Webb, the lead microbiologist from Southampton, explains: “Biofilms are extremely common, in fact they account for around 80% of all bacterial infections. But when antibiotics were developed, they were designed to target single cell bacteria. Biofilms represent an entirely different mode of bacterial growth, and they can be made up of complex and structured communities of bacteria. The biofilm state and the heterogeneity within biofilms mean that they can tolerate up to 1,000 times more antibiotics than a single-celled bacteria.”
However biofilms do have an Achilles heel. In order to aggregate – that is, transform from free-living single cells into a biofilm cluster – they have to use a biological mechanism to change state. Once they’re aggregated in a biofilm, the bacteria can still separate again; and the fact that this reverse mechanism exists means that we can exploit it. By triggering the dispersal mechanism, it’s possible to break up the biofilm, leaving the individual bacteria on their own, ready to be destroyed by antibiotics. And this mechanism exists within all bacteria, which means that, if we can harness it, dispersal offers an entirely new approach to combatting bacterial infections.
Using Diamond's life science beamlines, the team are studying the atomic structure of bacterial molecules involved in triggering biofilm dispersion. Not all biofilms are the same, and different triggers for dispersion are currently being investigated. In Southampton, the team have developed their own method of dispersing biofilms using a common gas: nitric-oxide. For humans, nitric-oxide is known as a signalling molecule in many physiological and pathological processes, but for bacteria, it’s a signal to break up biofilms.
Ivo Tews, who leads the structural work at Southampton, explains: “The nitric-oxide induced dispersion is our own discovery and we are keen to understand how this works and further explore the process. Diamond has transformed the way we approach the problems presented by biofilms. With synchrotron light, we can study the proteins of the bacteria involved in dispersion.”
The Southampton group have joined forces with Martin Walsh’s group at Diamond who also are using structural biology techniques to understand the molecular basis of biofilms in bacterial respiratory pathogens. Andy Hutchin, a Southampton/Diamond jointly funded PhD student, enables the team to combine the use of Diamond and the powerful infrared lasers at the Central Laser Facility to observe how nitric oxide binds to the protein molecules involved in this dispersal process, leading to the reaction. The group also plan to use super-resolution microscopy to study bacterial cell surface receptors. Ivo notes: “Having access to technology is central to advancing our understanding of biofilms and how to combat resistance.”
We now know that biofilm dispersal restores the effectiveness of antibiotics. We also know how to trigger the mechanism in biofilms that causes them to break up. But there’s something else that makes this finding really significant. Jeremy explains: “The biggest barrier to treating bacteria has always been their astonishing capacity to evolve. But because dispersion isn’t a direct threat to bacteria’s existence, they won’t evolve to overcome drugs that induce it.” He continues: “That’s what makes this new approach really exciting. Instead of engaging in this constant battle against bacteria, we may be able to take it out of the fight altogether. And as soon as they stop evolving resistance, bacteria become much easier to treat.”
Drugs that use this approach are already in clinical trials and are showing great promise in reducing resistance. There’s still work to be done on investigating the various mechanisms of dispersal in different biofilms and designing drugs that work effectively with antibiotics, but the team’s strategy of divide and conquer looks set to provide a powerful new weapon in the war on bugs. It’s a tough battle: bacteria are astonishingly complex and resilient, but we have the upper hand, because we have science on our side.