Find out how I04-1 was used to study the T-cells in our Diamond News highlightRead More.

Enhancing the body’s own immune system to fight cancer 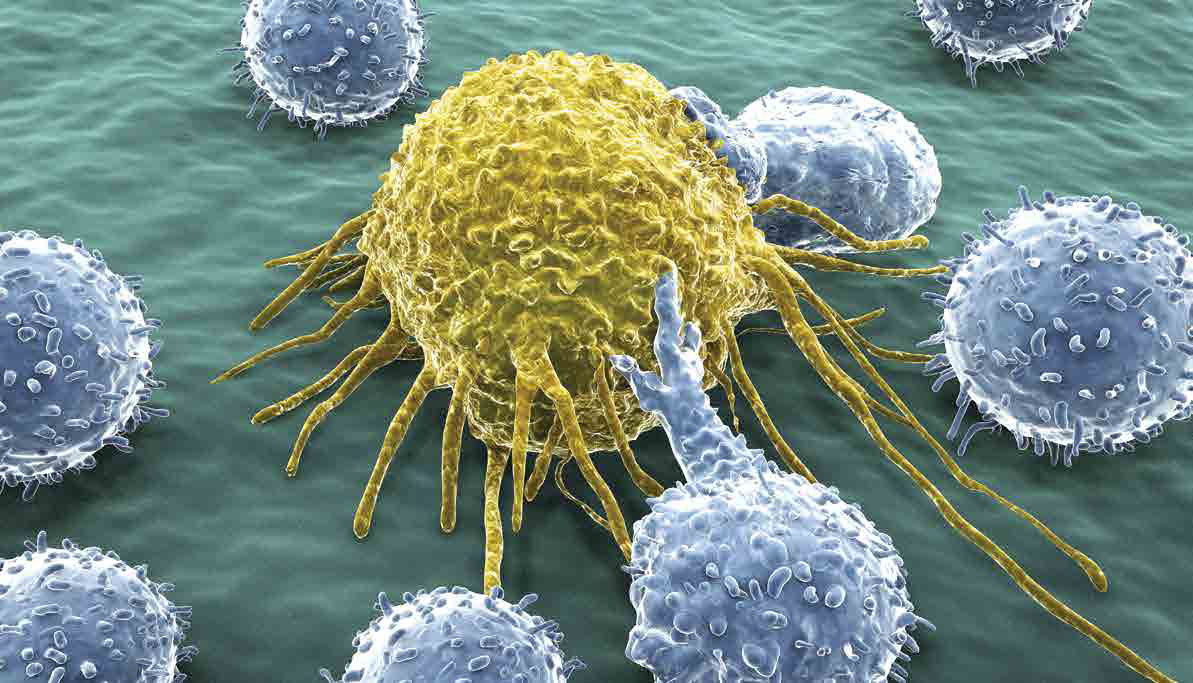 Forget your pals, your parents, or your partner; your immune system is the best friend you will ever have. Thanks to this collection of organs and processes, our bodies really are fortresses. We may still get sick, but we successfully fight off vast numbers of microbes and viruses every day. Yup, our immune system is pretty great, and right at the centre of this defensive force are T-cells, the white knights of the body.
T-cells are a type of white blood cell responsible for finding and destroying unwelcome cells. These incredible cells are covered in little fingers known as ‘receptors’, which allow them to identify anything out of the ordinary. All cells are covered in tiny proteins: long chains of amino acids all strung together. Proteins control a huge variety of functions inside the cells. But bacterial and viral proteins look very different from normal, healthy proteins. When the T-cell receptors come across cells infected with these invaders, they call in reinforcements and get other cells to come and help; then the army of T-cells latch on to the proteins and shoot out toxic granules that punch holes in the infected cell, neutralising the threat.
These little scrappers are extremely powerful; in fact, they can sometimes be too powerful. Autoimmune diseases like type 1 diabetes occur because T-cells wrongly attack healthy cells. In the case of diabetes, they destroy insulin producing cells, leaving the body insulin-deficient. But there’s a bright side; because they are so powerful, T-cells could be a major weapon against disease, particularly as a cancer therapy. That’s why scientists are working hard to try and harness the potential of T-cells and make them usable as a medical treatment.

A T-cell (green) interacting with a cancer cell (grey) via the T-cell receptor.

Two people who are at the forefront of this mission are Dr Pierre Rizkallah and Dr David Cole from Cardiff University. Pierre and David are using Diamond’s macromolecular crystallography beamlines, I02, I03, I04, I04-1 and I24, to study the interaction between T-cells and cancer cells in an attempt to make super T-cells capable of eradicating cancer from the body.
There are many different types of T-cell, and a very small number of them are already capable of picking out and destroying cancerous cells. Unfortunately there aren’t enough of the cancer-killing variety, and they’re also not effective enough to always successful destroy cancer. So Pierre and David are looking at ways of increasing the number of cancer-killing T-cells that the body produces.
Pierre describes the process of picking out those cancer-killing T-cells from all of the other types of T-cell in the immune system: “It’s a very small number that are actually effective against cancer, but if we can find that needle in the haystack and pick it out, then we can leave the haystack and concentrate on replicating the needle.”
But it’s not just a case of isolating the cancer-killing T-cells; Pierre and David also need to make them more effective at binding to the cancer cell proteins. This means manipulating the fingers on the outside of the T-cell so that they’re better at hooking on to the cancerous proteins. To do this, they need to know the exact shape of the cancer cell proteins, down to the individual atoms; they can then alter the shape of the T-cell fingers so that they latch perfectly on to the target proteins.
And this is where Diamond comes in. David comments: “That’s the power of the synchrotron. We use it to identify the atomic structure of the target. We can then modify the T-cells and come back to Diamond to see close up the changed reaction between the modified T-cells and their target. Diamond is there the whole way through. Without that you’re just fumbling in the dark. The synchrotron allows you to see what’s really going on so that you can direct what you’re doing to those molecules in the proper way instead of just taking guesses and using trial and error, which is what you would be doing otherwise.”
Based on the research carried out at facilities like Diamond, we’re now closer than ever to seeing T-cell therapy used on patients. In a medical setting, clinicians could take T-cells out of a patient’s body, pinpoint the cancer-effective T-cells, mutate them to create stronger fingers, and then replicate the enhanced, cancer-killing variety before injecting them back into the patient’s body, where they can begin destroying cancerous cells.
This form of cancer therapy has real advantages over existing treatments. Firstly, T-cell treatments are a form of ‘personalised medicine’, which means that they work around the genetic differences between individuals. Because we’re all made slightly differently, existing cancer treatments work better on some people than others. But T-cells are something that we all have in common, and so the results of T-cell therapy would be much more consistent. What’s more, because the T-cells are from the individual’s own immune system, there’s no risk of the body rejecting them.
But there’s another key advantage of T-cell therapy over existing treatments: they are highly targeted to only destroy cancerous cells and nothing else. Existing treatments like chemotherapy destroy large numbers of healthy cells – that’s why patients often lose their hair and experience nausea. With T-cell treatment, there would potentially be no collateral damage to healthy cells and thus no side-effects.
All cancer cells are different and so are the proteins on the outside of them. That means that there’s still a lot of work that needs to be done to create different types of highly-effective T-cells for each cancer. But astonishing progress has already been made, and T-cell cancer therapies are already in clinical trials.
“I really believe it’s going to be available in the next 10 years.” David comments. “It’s already happening now. There’s a lot of investment from bio-tech companies in T-cell treatments. We all know how powerful these cells are, and our ability to harness that power is increasing with the research we’re doing at Diamond.”
Cancer is a highly complex group of diseases, and T-cells won’t be a magic bullet, but they are likely to provide robust new options for patients undergoing cancer therapy. There’s still work to be done, but in the meantime, T-cells will continue fending off the nasties that try and invade our bodies every day. So be grateful for these little warriors, going in to battle time after time as they tirelessly fight to keep us safe.