With the range and depth of research taking place at Diamond, from 2-year geological disposal experiments, to analysing container corrosion and investigating safe decommissioning processes, scientists coming to the synchrotron are not only ensuring the future protection of our environment, but also saving the UK economy hundreds of millions of pounds by simplifying storage solutions.

As the COP21 climate meeting in Paris drew to a close in December 2015, the subject of nuclear power was on everybody’s lips. Nuclear energy currently produces 11% of the world’s electricity1 and has avoided the release of an estimated 56 gigatonnes of carbon dioxide since 1971 when compared with non-renewable energy2. In fact, the International Energy Agency (IEA) projected that in order to meet the desired 2°C goal outlined at COP21, the proportion of energy derived from nuclear sources needs to more than double from 396 gigawatts (GW) in 2012 to 930 GW by 20503.

All of this is encouraging news for the future of nuclear power; however as demand for energy increases, so does the amount of radioactive waste being generated. Now attention has focused on how we can safely store and dispose of this waste, so that radioactivity is effectively isolated from humans for thousands of years below ground. How will radioactive waste products react with storage containers and the surrounding geology over colossal time spans? For the past few years, Diamond has been helping a handful of pioneering nuclear researchers find out.

Professor Fred Mosselmans, Principal Beamline Scientist at Diamond's microfocus spectroscopy beamline (I18), has been involved in much of the research. He has worked in X-ray absorption spectroscopy for over 25 years and he is applying his knowledge to assist numerous projects at Diamond that will find out how best to store radioactive waste. 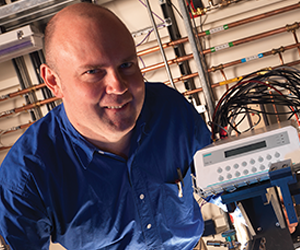 Fred Mosselmans in the I18 experimental hutch.

In the UK, a geological disposal facility (GDF) buried deep underground and consisting of metal and cement as well as radioactive wastes will be built over the coming years to dispose of the waste products. The nuclear waste will be radioactive for 100,000s of years so understanding the processes in order to optimise its containment is paramount. Prof Mosselmans explains: “Finding volunteers for a site for the GDF is likely to take several more years and in the next year or two host communities could be identified. We have to make sure that the facility will last and by using the synchrotron we can predict at a molecular scale what will happen to the radionuclides as the GDF inevitably degrades over thousands of years.” 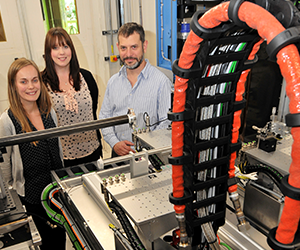 Dr Claire Corkhill, based at the University of Sheffield, is on a mission to understand how radioactive waste reacts with cement in the geological disposal facility over long periods of time. To do so, she is currently performing the world’s first long-duration synchrotron experiment at Diamond’s High Resolution Powder Diffraction beamline (I11). She elaborates: “Using X-ray diffraction, our experiment will tell us about the minerals that are formed inside the cement over a long time span. The minerals are important for making radioactive waste safe as they bind radionuclides from degraded waste packages and prevent them from escaping, so we need to determine what they are and how they form. We are testing different types of cement formulations used in UK nuclear waste immobilisation and we hope to develop new materials that will improve the safety of the GDF.”

Dr Corkhill is taking advantage of the Long Duration Experimental facility (LDE) at Diamond, which is the only one of its kind in the world. In a truly unique experiment, her samples are set up in the beamline and then passed into the beam each week to allow her to track their behaviour over the course of two years. 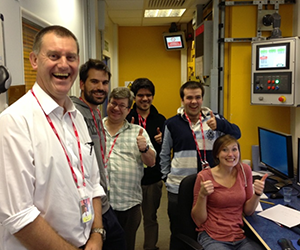 Another key player in this field is Dr Tom Scott, from the University of Bristol, who has been investigating the behaviour of intermediate level radioactive waste (ILW) storage drums at Sellafield. “A small proportion of the waste drums have begun to exhibit external distortions after 30 years in storage, so we worked with Diamond to simulate on a small scale what was happening inside the containers,” he said. “We made thin matchsticks of uranium and corroded them inside grout to analyse the corrosion products at the Joint Engineering, Environmental, and Processing (JEEP) beamline, I12. No one had done these experiments before; this was cutting-edge science where we observed the build-up of corrosion products in situ, on the beamline. 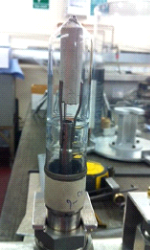 A sample of grout and uranium ready for examination at the JEEP beamline, I12.

The corrosion products of uranium take up considerably more space than the precursor metal and their expansive development inside the grout-filled waste drums is likely to explain why distortions were being observed on their outsides. Now armed with the findings of Dr Scott’s ground-breaking study, Sellafield has undertaken to reconsider the design of how some of the historical legacy waste is packaged in the future. Dr Scott comments: “Our research indicated that internal expansion inside the drums caused by corrosion of waste metals will induce cracking of the contained grout at a relatively early stage in life. Hence a simpler packaging strategy which doesn’t use grouting may provide a more cost effective option.”

Supported by this and other complementary research carried out by the National Nuclear Laboratory (NNL) and Sellafield Ltd. within an existing long term programme, it was recently announced that Sellafield will cut down a 22-step packaging process for some legacy ILW to just 3 or 4 steps. This is a more cost-effective way of interim waste storage, offering taxpayer savings in the order of several £100M4. 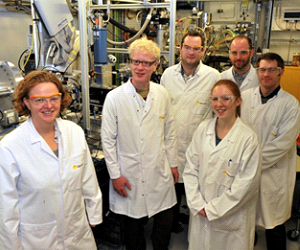 As well as monitoring how radioactive waste interacts with storage containers, it is important to predict how it might interact with the environment when a storage facility eventually degrades after thousands of years. Professor Katherine Morris, based at the University of Manchester, has dedicated her research to understanding how radionuclides behave in complex systems. One such project, funded by the Natural Environment Research Council, focused on biogeochemical processes in the alkaline environments relevant to nuclear waste disposal. Prof Morris explains: “We reacted alkaline soil samples with uranium and found that bacteria could operate in these conditions. As we hypothesised, they had a positive effect and reduced the uranium down to a less-soluble form so that it was retained and prevented from being transported.” In collaboration with Professor Jon Lloyd, Head of the University of Manchester’s Geomicrobiology Group, Prof Morris is now isolating the bacteria that possess these amazing properties and they hope to study them further at Diamond.

Professor Richard Pattrick (also from the University of Manchester), along with Prof Morris and colleagues from the NNL, are also involved in understanding the fate of radioactivity during decommissioning of a nuclear power station. They harnessed the capabilities of the synchrotron to examine the walls of the aged nuclear fuel cooling ponds. The X-ray absorption studies at Diamond showed that strontium was bound to the titanium oxide contained in the paint that coated the pond walls. This suggested that radioactive strontium was likely to be strongly associated with the paint and would be removed when the paint layer was removed. This would leave the underlying concrete below nonradioactive, safer and much more easily disposed of, simplifying the decommissioning process.

These pivotal studies put Diamond at the forefront of radioactive waste research and the findings are already having a huge impact on the way in which waste is stored in the UK. Prof Mosselmans stated: “The techniques on offer at Diamond, from X-ray absorption to diffraction, are essential to improving the way in which nuclear waste is stored in the future.” With the upcoming GDF on the horizon, the capabilities of the synchrotron will be vital for making sure safety is paramount.