Beyond the cutting edge 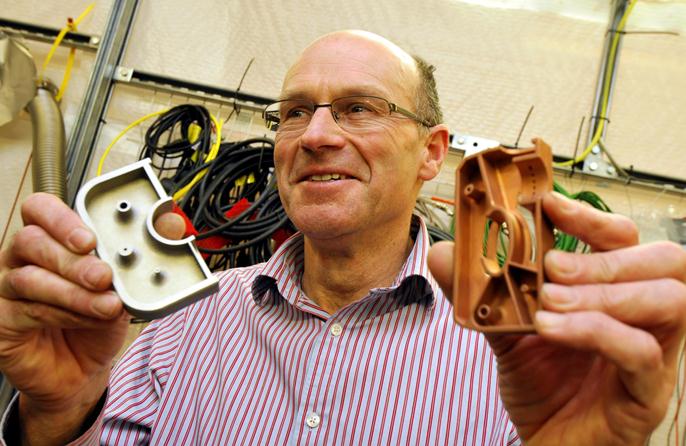 Diamond’s Engineering Group has been investigating the viability of producing metallic 3D printed components for use across the synchrotron. Could this be the next giant leap for industrial manufacturing?

3D printing is a popular concept and its mere mention can bring to mind any number of thoughts; from the furore over printed guns, to the emerging cult of individualised consumer commodities. But regardless of the image it conjures up, the accompanying feeling is usually one of boundless possibility. The idea that you can produce objects of limitless complexity not only captures the public imagination, but gives product designers scope to re-invent the wheel in a world unhindered by traditional manufacturing processes.

The birth of this so-called ‘additive manufacturing’, with powdered materials being layered up and fused together with heat can be traced back as early as the 1980s, with patents for 1st generation 3D printers coming out of Japan and the USA. However, despite the increasing demand and variety of applications the commercial exploitation of 3D printing is still yet to break beyond the domain of specialist high-tech industries.

Stewart Scott (pictured), Senior Mechanical Engineer at Diamond, has been fascinated with the potential of a particular strand of the 3D printing process called Direct Metal Laser Sintering (DMLS). As the name suggests, this is the printing of objects using powdered metals instead of plastics, with a high-energy laser to melt the metal and fuse the layers. “In the early days metallic 3D printing could only really allow for the production of prototypes as the layering was quite course” says Stewart. “But now this can be done in much finer detail, so people can start to produce the real thing.”

“At Diamond, we’re looking at producing parts for devices that move, and thus where mass is important. When we have parts that are moving quickly or in a highly repeatable fashion, what we need is something that is very stiff with as little mass as possible. If you look at approaches to this problem in nature, you can see things like honeycomb, complex webbing, or sponge-like structures, and whilst these are either impossible or extremely difficult, expensive, and time-consuming to create with current tooling methods, DMLS gives us a real opportunity to bring this biomimetic design approach to metal components.” 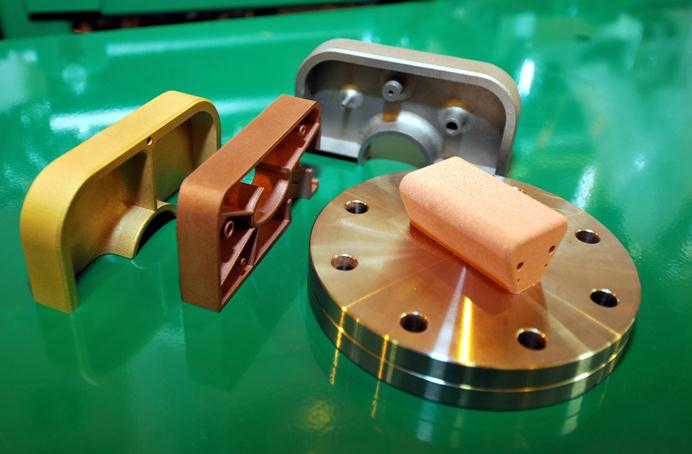 Alongside the advantages of making things that you could never make with a traditional cutting tool machining process, with more freedom to elaborate over the curvature of surfaces, internal voids, and textures, you can produce in one piece something that might previously have required a number of parts to be welded or bolted together. In theory, these single components can also be produced much faster – overnight or over the weekend – whereas traditional machining might take around 6-8 weeks.

But it doesn’t come cheap, and Diamond relies on local suppliers and academic collaborations to be able to drive their exploration of this method. The relatively high costs compared to printing plastics mean that the technique only becomes cost-effective when the component is complex. As the level of complexity goes up, the relative time and cost go down, unlike with traditional machining processes where the reverse is true.

Stewart is also interested in the different materials that can be used in this process. “So far we’ve been mostly using stainless steel, along with titanium, aluminium, and high-nickel alloys that are regularly used in automotive and aviation industries. The most challenging materials have been copper and silver. Copper is very interesting to us because of its high thermal conductivity. Due to the heat generated by Diamond’s extremely intensive X-ray beams, we’re always looking at new ways to effectively reduce the heat in our components. However, the particular challenge here is that its conductive properties mean that much higher energies are required for the sintering process.”

Working on copper components with the University of Wolverhampton, the first adopter of DMLS in the UK, has enabled Stewart and his team to collaborate with experts in the field to develop these new techniques. 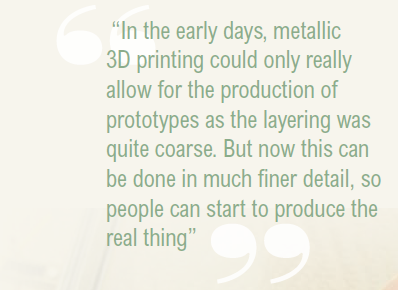 There are a number of challenges to overcome and Stewart is taking a step by step approach. The first stage was to ensure that the copper is suitable for use in an Ultra High Vacuum environment. Following this success a copper component with complex internal water-cooled channels bonded directly to a stainless steel vacuum flange has been produced. Testing of the bond strength, machinability, and leak testing is now in progress.

Beyond the logistical and economic practicalities of being able to rapidly produce highly complex components at a lower cost, there is what looks like the emergence of an entirely new design paradigm. The growth of a DMLS-inspired organic design discourse will no doubt take mechanical engineering beyond the world of straight lines and cylinders.

Current limitations in size mean that components of around 250x250x350 mm can only be produced, yet this hasn’t stopped Stewart and his team striding forward with their investigations. Stewart and his colleague Sol Omolayo from the Vacuum Group produced a paper on the benefits of DMLS that Stewart presented at the Mechanical Engineering Design of Synchrotron Radiation Equipment and Instrumentation conference (MEDSI) in 20141. From here it was evident that Diamond was the only synchrotron currently to be producing printed metallic components.

While there is a palpable buzz in these early stages of development, the next generation of DMLS printers is already on the horizon with the €20 million EC-funded AMAZE project. This will establish four pilot-scale industrial factories in order to produce objects up to two metres in size with close to zero waste, and costing 50% less than traditional processing. With Stewart and his team at the forefront of exploiting this technology for synchrotron components, Diamond is certainly in a favourable position to capitalise on the bright future of DMLS.