Research Complex at Harwell: A blueprint for collaboration 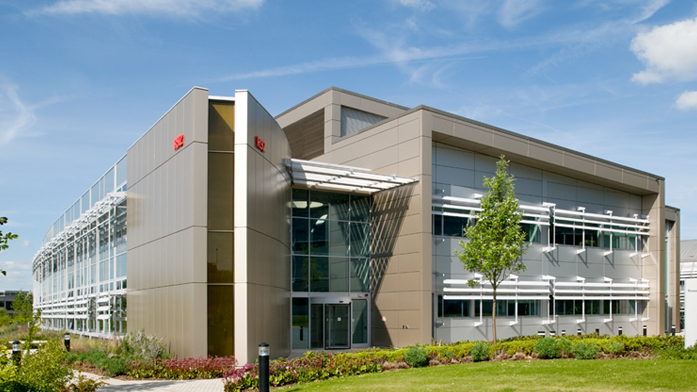 The Research Complex at Harwell (RCaH) opened its doors in 2010 and is now firmly established as a vibrant centre of excellence for researchers looking for a long term base at the heart of the Harwell campus. It also serves scientists who need short term access to state-of-the-art experimental tools and techniques in the life or physical sciences, enabling them to enhance their research, access on-site expertise, and form new collaborations.

Today, the RCaH, which is managed by the MRC on behalf of RCUK, in partnership with BBSRC, EPSRC, NERC, STFC and Diamond, provides a national focus for academic and industrial researchers to incubate scientific interactions with the world-class facilities (synchrotron, neutron, laser) on the Harwell campus. Research groups benefit from cutting edge facilities, both in-house and across the campus, enabling them to carry out world-class research in life and physical sciences, and at the interface between them.

By bringing scientists from different disciplines together under one roof, the RCaH encourages researchers to broaden their perspectives and find new approaches to tackling complex scientific questions. New collaborations flourish and groups make discoveries that are enriched by their presence on the campus.
Professor Peter Lee, Acting Director of the Research Complex at Harwell, comments, “The driving ethos of the RCaH is to put academic research teams at the heart of some of the UK’s best scientific facilities. Industrial collaborations are also encouraged. We offer state-of-the-art laboratory and office space and have been instrumental in helping some of the country’s leading research groups to thrive and fully exploit the capabilities and expertise here at Harwell. There is a constant flux of groups in both the life and physical sciences, and hence scope to accommodate additional groups. We are always keen to hear from researchers who are interested in either a long-term residency or short research visits.” 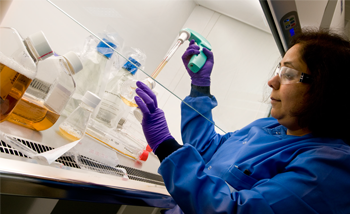 Nahid Rahman in the tissue culture lab of the Oxford Protein Production Facility-UK (OPPF-UK); a core facility for protein production and crystallisation located at the RCaH.

Long term RCaH-based researchers include scientists from the UK Catalysis Hub, the London Centre for Nanotechnology, Manchester X-ray Imaging Facility, UCL, Bath, Cardiff and Leeds. Their research programmes include major and challenging areas that can best be addressed by being close to the facilities on site. These include structural studies on membrane proteins; high throughput functional structural genomics related to disease
and enzyme mechanisms; biological imaging; catalysis; drug development and delivery; matter under extreme conditions; chemical processing; surface and nanoscience; and energy research. A portion of the Central Laser Facilities and a central protein production facility reside in the RCaH, further stimulating and supporting scientific interactions.
Professor Andy Beale, EPSRC Fellow at UCL, is based at the UK Catalysis Hub, a national network with over 35 collaborating universities, located in the research complex. Andy explains, “My group is working on heterogeneous catalysts for applications such as cleaning up car exhaust emissions. Catalysis is at the heart of the chemical industry, which is an extremely important part of the UK economy generating in excess of £50 billion per annum. Being based at the RCaH is vital to us and our industrial collaborators. Together we are working on the major fundamental and conceptual changes in the field of catalysis and, increasingly, we are turning to powerful national research tools, such as those available at Diamond, ISIS, STFC’s neutron and muon source, and STFC’s Central Laser Facility, all of which are located here at Harwell.”

“Last year, we achieved a world first with the help of the powerful imaging techniques on Diamond’s Microfocus Spectroscopy beamline (I18). Together with researchers from BASF and Diamond, we successfully revealed the molecular level chemical structure and location of catalysts during operation in the liquid phase. We have built up excellent working relationships with the scientists across the campus. This means we can design really ambitious experiments, fully maximising the imaging capabilities, and recreating conditions close to the working conditions of a commercial catalyst.”

“Our location also allows us to regularly participate in the science workshops and conferences that take place on the campus, such as the Diamond/Infineum iCAR conference, which brings together researchers from academia and industry, all of whom are working in the field of automotive research. These events enable us to see the bigger picture and appreciate the challenges that industry faces now and in the future. The next generation of materials that are going to enhance our lives and save our planet are in development now, and are being tested at large-scale facilities such as Diamond.”

Other examples of research based in the RCaH include:

Multi-scale X-ray imaging
Imaging is a pervasive theme at the RCaH, and the Manchester X-ray Imaging Facility group develop unique environmental cells that replicate the processing and service conditions of materials whilst imaging with X-rays or neutrons. Applications range from improving super-alloy turbine blades to determining how ice crystal formation in ice cream affects taste. Other projects include measuring strains at the nano-scale in whole arthritic joints and replicating magma flow in the earth’s crust.

Non-invasive measurement of bone disorders
Researchers from the UCL Institute of Orthopaedics and Musculoskeletal Science, STFC’s Central Laser Facility (CLF) and the Royal National Orthopaedic Hospital have developed the CLF’s Spatially Offset Raman Spectroscopy capabilities to detect a known compositional abnormality in the bones of patients suffering from osteogenesis imperfecta, a genetic bone disorder which affects collagen. This success paves the way for larger studies that focus on osteoporosis and other chronic debilitating bone diseases with large socioeconomic burdens.
Topological insulator nanowires
Scientists working on different projects can be drawn together through the use of shared equipment. The idea to compare gold and titanium dioxide-based catalysts for the synthesis of chalcogenide nanowires was born after a chance discussion at the electron microscopy facilities in the RCaH. The research that followed involved a collaboration between scientists from Oxford, Cardiff, STFC and the UK Catalysis Hub, and achieved homogeneous nanowire ensembles. This work will feed into the next generation of electronics.
Mechanisms of antibiotic resistance
Antibiotic resistance is a persistent threat to human health. Many of the resistance genes are encoded on small pieces of DNA that can be transferred between bacteria, enabling the resistance to spread rapidly. Scientists at the RCaH and the University of Leeds are investigating how such DNA is synthesised in bacteria by solving X-ray crystal structures of the replication machinery. A better understanding of how this machinery works will help with the discovery of novel antibiotics in the future.
Research groups are accepted into the RCaH on a competitive basis, and can take up long-term residence or make short research visits, depending on their needs. For more information, visit www.rc-harwell.ac.uk