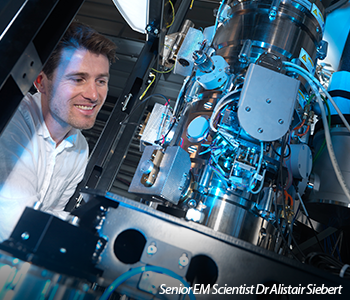 The electron Bio-Imaging Centre (eBIC) at Diamond provides scientists with state-of-the-art experimental equipment and expertise in the field of cryo-electron microscopy, for single particle analysis and cryo-tomography. Two powerful cryoelectron microscopes allow users to investigate the structure of individual cells and to visualise single bio-molecules, exploiting techniques that are rarely available at home laboratories. The combination of electron microscopy with photon-based techniques underpins Diamond’s position at the centre of highresolution imaging in the UK.

Urinary tract infections are most often caused by E.coli, which have hair-like structures called pili to attach them to the urinary tract wall. Pili are polymers that are composed of various subunits, which need to withstand huge sheer forces during urine flow to maintain bacterial adhesion. To shed some light on how the pili anchor E.coli in place, structural analysis at eBIC was conducted.

Type P pili were applied to electron microscopy (EM) grids and flash-frozen for cryo-EM. Images were collected using a detector with a 1.1 Å pixel size and a defocus range or -1.5 to -2.7 μm. A total dose of 135 electrons/ Å2 was collected and the dose was fractionated over 40 frames to enable subsequent correction for sample movements during the exposure.

The atomic structure of the P pilus was visualised using iterative helical realspace reconstruction, and the atomic model, generated from a 3.8 Å resolution reconstruction, demonstrated that the pili adopted a coiled conformation. The spring-like structure provided much needed flexibility during urine flow and effectively anchored the bacteria onto the urinary tract walls. This information is vital for the development of new antibiotics that could interfere with pili formation and prevent infections from literally taking hold. 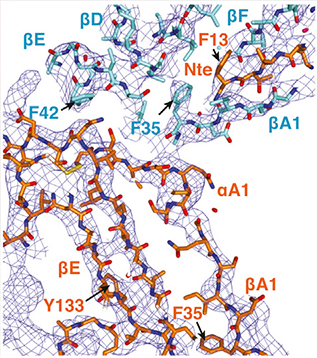 Details of a representative region of the experimentally derived electron density. Electron density contoured at a 1.5 σ level is shown in wireframe representation coloured in blue. Reprinted from Hospenthal et al., with permission from Elsevier.

“There is clearly a revolution in EM, which has been driven by improvements in three key areas: better microscopes, better detectors and better software, and all of this latest technology is available at eBIC.”