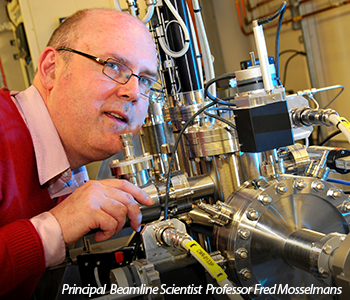 I18 offers a high-brightness micron-sized X-ray beam for the study of complex inhomogenous materials and systems under realistic conditions. The combination of the brilliance of a third generation synchrotron source, and optics able to focus the beam to a micron sized spot, allows compositional, temporal and spatial information to be gathered at high resolution.

The material derived from a metal-on-metal (MOM) hip replacement is thought to be responsible for an inflammatory response, which can lead to failure and eventual removal. Capsule tissue from failed MOM implants was analysed at Diamond Light Source to identify the metal species triggering the immune response. Tissue samples were cut into 10 μm thin sections, fixed onto quartz slides and studied by two techniques at beamline I18: Microfocus X-ray Fluorescence (μ-XRF) and Microfocus X-ray Absorption Spectroscopy (μ-XAS).

Using μ-XRF, 2-dimensional elemental maps were produced from the samples, covering a 400 x 400 μm region. Most of the maps were produced with an incident energy of 8 keV, which allowed the detection of residual chromium and cobalt. The second micro-technique, μ-XAS, was used to determine the chemical forms of the metals, with X-ray absorption near edge structure and extended X-ray absorption fine structure spectroscopy pinpointing the exact metal species present in the samples.

The combined techniques demonstrated that the most abundant metal species present in the MOM hip tissues contained chromium (specifically, Cr(III)PO4), with cobalt and molybdenum also present in lesser quantities. These metallic species are thought to be derived from wear of the hip replacement and could be prompting the active immune response.

The results from this research meant that scientists could find out the exact chemical make up of metal from medical devices in the surrounding tissues of their patients. Of the 1.5 million MOM hip replacements implanted worldwide since 2000, virtually all types have now been banned due to the soft tissue reaction caused by the metal1. This wouldn't have happened without using I18 to find out the exact chemical form of the metal.

“The approachability of the I18 beamline scientists was key. They were keen to try my idea of mapping cobalt and chromium in tissue from around hip replacements despite no previous data from synchrotrons.”