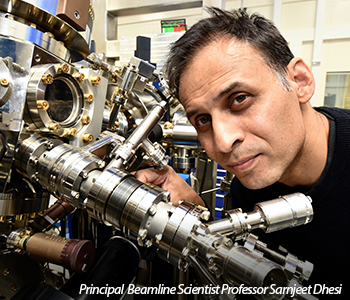 On I06, PEEM is combined with polarised soft X-rays to image surface electronic, magnetic, and geometric structure with nanoscale resolution. The PEEM is equipped with an electron energy analyser for spatially resolved X-ray Photoelectron Spectroscopy as well as the capability to apply in situ static/ pulsed electric and magnetic fields. A femtosecond laser source can be combined with the X-rays for pump-probe timeresolved studies.

The electrical reversal of magnetism has been demonstrated using ferroic materials, but it typically requires the application of a variable magnetic field as well as a voltage. The electrical switching of an out-of-plane (OOP) magnetisation with no magnetic field is particularly challenging, and has only been demonstrated in a few small regions of epitaxial nanocomposites and polycrystalline heterostructures.

Studies were undertaken on I06 to demonstrate the electrical control of magnetisation in metal films of nickel (Ni) without a magnetic field. Strain was applied to these films via their BaTiO3 substrates, using a voltage of up to 300 V. Imaging performed using PhotoEmission Electron Microscopy (PEEM) permitted observation of the electrically driven ferroelectric domain switching in exposed regions of the substrate, and the resulting magnetic changes in the Ni film. The ferroelectric domains were imaged using X-ray Linear Dichroism (XLD) contrast, while film magnetisation was imaged using X-ray Magnetic Circular Dichroism (XMCD) contrast. Both in-plane (IP) and OOP components of film magnetisation could be imaged given that the X-ray beam was incident on the Ni film at a grazing angle of incidence. This permitted 3D magnetic information to be collected. The magnetic domain changes were seen to correlate well with the observed ferroelectric domain changes.

The imaging demonstrated that magnetic stripe domains, which form because of an OOP magnetic anisotropy arising from growth stress, could be repeatedly created and destroyed in regions of an Ni film, due to strain from the electrically driven ferroelectric domain switching in the BaTiO3 substrates. One can envisage exploiting the results in magnetic nanostructures that are smaller than the 125 nm stripe width, for high-density data storage with OOP magnetisation under electrical control. 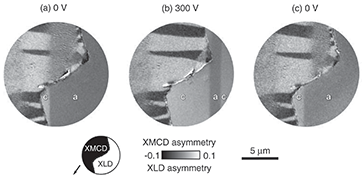 “The data from I06 are critical for our research on magnetoelectrics because we are able to make high-resolution maps of in-plane magnetisation showing electrically driven changes. We have also made good use of the ability to apply a magnetic field and control the temperature. I06 is a beamline of which the UK can be truly proud.”