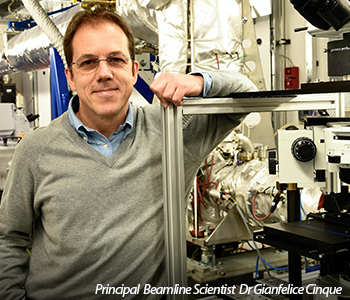 The MIRIAM beamline has two end stations, dedicated to confocal Infrared (IR) Spectromicroscopy and IR imaging. Designed for optimum performance from the near- to the far-IR, a suite of single and array detectors equip the microscopes to cover the whole IR range. The breadth of applications call for a versatile suite of sample environments and sampling methods coupled with off-line facilities for sample preparation and handling, as well as data analysis.

Infrared (IR) spectromicroscopy has been increasingly used for the study of cells and tissues as it can quickly determine the identity, concentration, and biochemical properties of the components of a sample. Of particular interest is the new capability for characterising biochemical reactions in living cells via synchrotron IR imaging.

A novel method called Correlated Cellular Spectromicroscopy (CSM) was recently developed, which relies on 2-dimensional correlation spectroscopy to cluster absorption bands that belong to the same molecule. The technique enables metabolic reactions to be followed in real time, such as the rate of metabolite formation and consumption.

Such an approach was used to detect the metabolites of glycolysis (one of the cellular pathways to produce energy from glucose) in a well-characterised lung cancer cell line. The cells were held in a custom-built liquid sample holder that was maintained at 37 °C under the IR microscope. The samples were analysed with Fourier Transform IR imaging being conducted on single cells and small cell clusters to detect variations of metabolite concentrations in time and space across the sample.

The combination of IR imaging and CSM was able to track the distribution of metabolite formation in the lung cancer cells. It successfully detected lactate as well as other glycolytic products (see figure). The molecular detail provided by this approach could allow it to be used for in vitro drug testing, for instance in multicellular assemblies that model living organs.

Adapted from Quaroni et al. with permission of The Royal Society of Chemistry.

“The beamline support team is unique in providing complementary and multidisciplinary expertise that ranges from optics to spectroscopy and from cell growth to data processing. This is the only facility where I can get help and advice for all aspects of my experiments, from sample preparation to data analysis. It is a great boon for my work.”