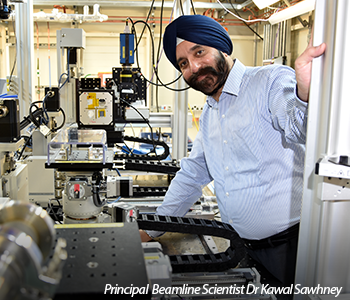 B16 is a versatile beamline that provides X-ray microscopy and imaging capabilities based on diffraction, fluorescence and phase-contrast imaging. Offering sub-micron X-ray Fluorescence Mapping, and with high flux provided by either direct white beam or a multilayer monochromator, fluorescence down to sulphur can be mapped. Microdiffraction in both Bragg and Laue geometry, and elemental mapping with sub-micron spatial resolution are unique capabilities of B16 at Diamond.

There are a number of analytical techniques, such as transport of intensity (TIE) and contrast transfer function (CTF) methods, which have been developed for propagation-based X-ray phase contrast imaging. Recently, coherent diffractive imaging (CDI) approaches have managed to recover the complex transmission function of a sample through iterative methods that rely on oversampling in the far field. However, iterative near-field methods are now being explored.

A new iterative near-field, in-line, phase contrast method was recently developed and compared with both TIE and CTF at Diamond. A proof-of-concept experiment was conducted at B16 to test the performance of the technique when imaging a test object constructed from multiple layers of gold (Au) deposited on a silicon nitride window.

Using a 9 keV X-ray beam, a point-source was created via a Kirkpatrick–Baez mirror, and a cooled 14-bit charge-coupled device camera with a 20x objective lens was used to image the distribution of photons from the YAG:Ce 35 μm thick scintillator.

The effective pixel size at the sample plane was 342 nm, and 62 sample phase-contrast and sample-free white-field images were obtained.

The innovative technique successfully allowed the quantitative determination of the thickness of the Au object when monochromatic X-ray illumination was used. The iterative approach can be used under conditions where analytical methods are not valid and does not need to be adjusted for an arbitrary constant phase offset. An extension of the technique that is currently under development will allow quantitative images to be reliably obtained using a polychromatic illumination. The flexible optical layout and operating modes of B16 made it possible to obtain the experimental data to test both the monochromatic and polychromatic implementations of the new iterative near-field method.

“The flexible layout and range of experimental equipment available, along with the great support from the beamline team, made it possible to test a method on B16 that we had developed through simulation. The proof-of-principle experiments will form the basis for future developments in iterative near-field imaging.”